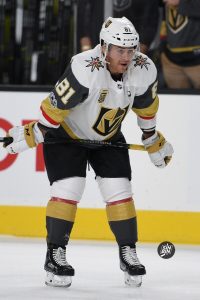 During the regular season, NHL defenseman watch film, get prepared for their next assignment, and then move on. In the playoffs, these guys have to look at each other’s mugs for 7 straight games. Little things become more important, scouting goes further, and adjustments are constantly made as the series wears on.

The fun thing about the playoffs, it’s not just one game and you won’t see them for awhile. You can do certain things that might not have an effect in game one, but it may work game five, six, seven. -Luca Sbisa

It can go both ways though. For some a seven game series is beneficial, it can expose others.

You get to play the same guys four to seven times. You get know their tendencies. What sets them off, what makes them good. You just try to outplay them that way. -Sbisa

During the regular season a tough matchup comes and goes. If a player gets the best of a Golden Knight, they can move on and get the next guy. In the playoffs, there’s no moving on unless you figure out that same matchup over and over again.

Marchessault and his line mates are fully prepared to face the fiercely emotional Doughty. Things could get testy, in fact, the Golden Knights are expecting it to.

Yeah they know how we play, and we know how they play. It’s nothing we can’t handle, we just can’t overthink it. Go out there, play intense and play our game. -Marchessault

W Before every playoff series the coaching/scouting staff prepares a “book” on the opposing team to give the players everything they could possibly need to know about their opponent. As the series moves on, film study becomes more and more vital.

Either you win that battle or you lose it. You know how they go in the corner, if they don’t like to get hit. In the playoffs you’ve got to go over each individual player. In the regular season, pre-scouts take you only five minutes… now it’s way more in-depth. -Sbisa

Marchessault has another way of looking at it. He’s not going to get worked up watching game film. For him it’s all about the play on the ice and the looseness of the Golden Knights lockerroom.

Obviously we’ll analyze a few stuff, but we’re not the Tampa Bay Lightning. Or Nashville. There’s no expectations for the Golden Knights right now. We don’t have expectations. We just want to surprise, go out there and win that first game. -Marchessault

The Golden Knights are calm and confident, now we wait and see if they can remain that way as they’re forced to pick Doughty beard hairs out of their sweaters every night for the next two weeks.