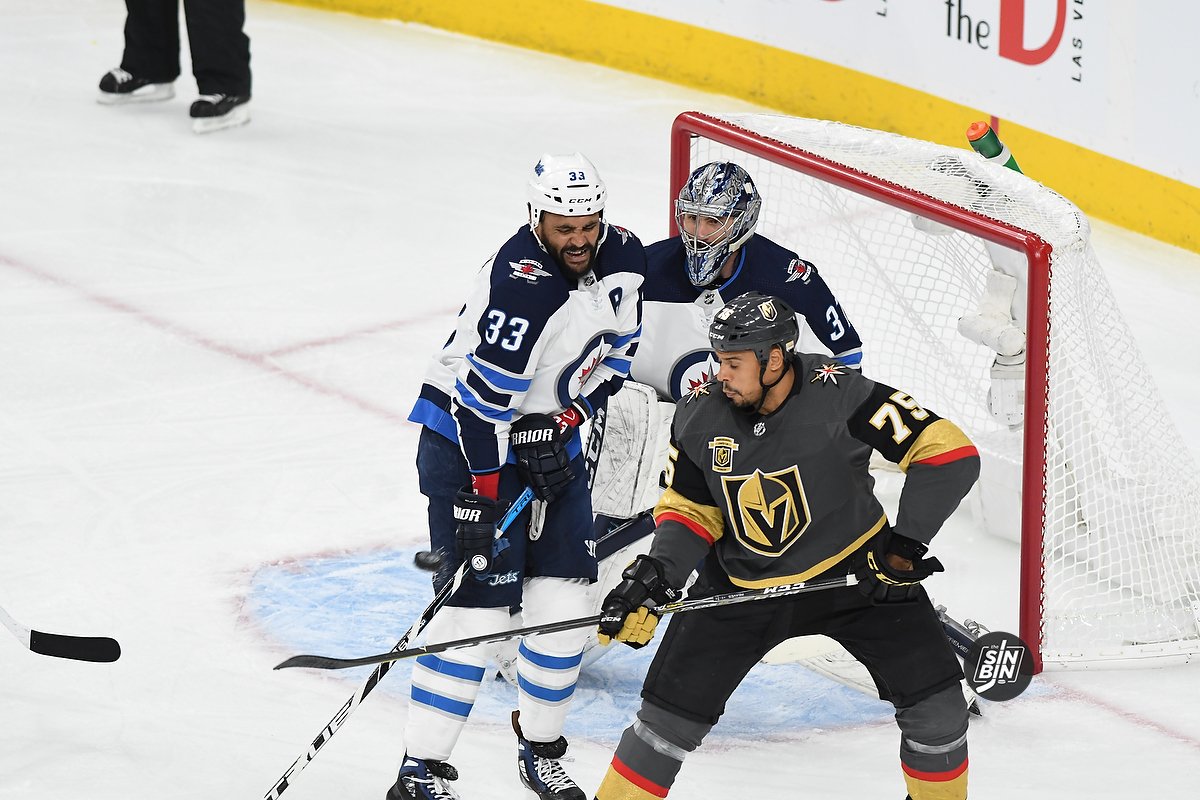 Just like we all expected; Ryan Reaves with the series-clinching goal of the Western Conference Finals. (Photo Credit: SinBin.vegas Photographer Brandon Andreasen)

Game 5 hero Ryan Reaves has only been a Golden Knight for four months but is easily the most polarizing player in franchise history. That was up until yesterday’s series clinching goal.

Reaves is a big body that can hold his own in front of the net. His strength around the crease opens up shooting lanes for his teammates, which is what happened on Reaves’ game winning tip in. Defenseman Luca Sbisa saw some light and let it sling. Like they’ve done hundreds of times together in practice, Reaves kept his eye on the biscuit and deflected it over Jets goaltender Connor Hellebuyck.

You’re always trying to get some offensive opportunities. You don’t want to be running around, getting some hits and not doing anything. You try and help out on the scoreboard anyway you can. -Ryan Reaves to SinBin.vegas on 5/15/18

When Vegas announced the acquisition of Reaves, GM George McPhee mentioned trading for a role player with playoff experience. Many (cough, Ken, cough) were confused because the Golden Knights had been playing so well, and concerned that bringing in an opposite style would hurt the club’s chemistry.

Jack Adams finalist Gerard Gallant echoed McPhee’s message, that Vegas wanted Reaves to play his game. After adjusting to a faster more disciplined style of play, the big fella fit in grinding away on the checking line. The new misfit worked with his teammates down the stretch and built the connection we saw in the Western Conference finals.

He makes people play quicker… He worked hard and always stayed prepared. When we put him in against San Jose he played well for us and he gave me no reason to take him out. -Gerard Gallant

The Winnipeg native earned his Game 5 moment. Like Gallant said, Reaves has played well, and kept himself prepared. For some fans, it was the first time he stood out for something outside of landing bodychecks. However, he’s done his job ‘Muckin’ in the corners‘, which can go unnoticeable. It was tough to miss his value yesterday.

The whole mentality of this team is ‘next man up,’… We’ve got a deep team. We’ve got a lot of good players. -Reaves

Next series up too.