Round Robin Adjustments – vs. Colorado Avalanche 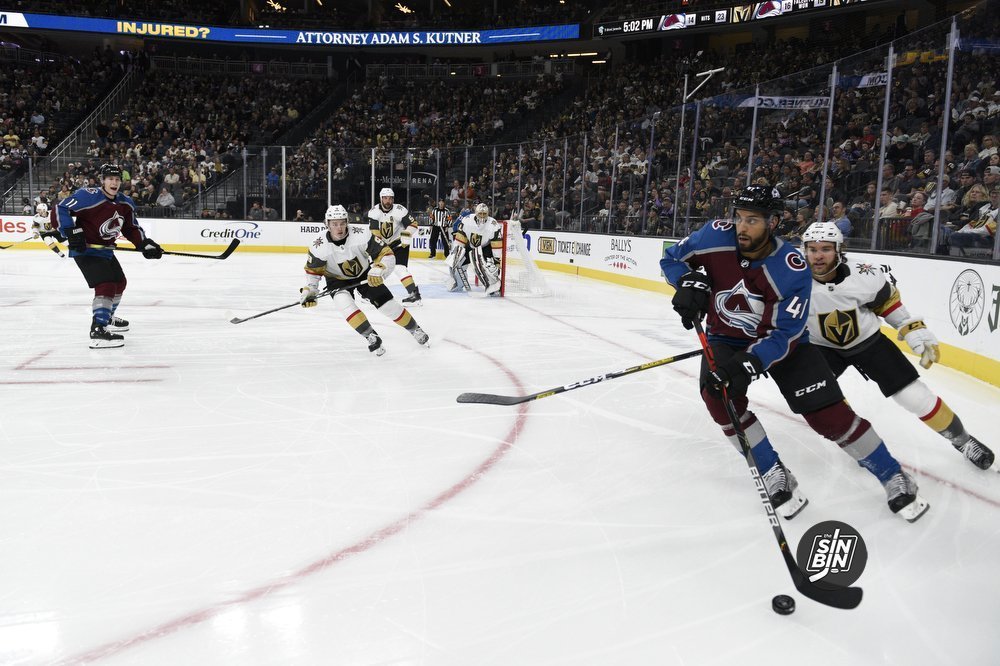 It’s only three scheduled games, but the round-robin sets up to be a difficult week for the Golden Knights. Colorado, Dallas, and St. Louis are highly competitive teams that each have had their success against Vegas this season. In seven combined games, the Golden Knights winning percentage is .428 (3-4-0), and all three of their victories came in overtime. Thus, the Golden Knights collected six points in that seven-game span but gave out 11.

Over the next week, we will breakdown where things went wrong against each of the three round-robin teams and identify the areas in which the Golden Knights can adjust to correct the issues. Today we start with the Avs.

Vegas was overmatched in both games against the Avalanche. In their first meeting, the Golden Knights allowed seven goals on 40 shots on net. The most goals and shot total from an opponent all season. In their second matchup, Colorado scored six goals and took 38 shots on net, the second most goals against, and third most shots allowed by an opponent.

Even more concerning is in six periods of play vs. the Golden Knights, the Avalanche scored two or more goals in five of them. So goaltending will need to be a big factor for Vegas, no matter which goaltender is in net. Oh and by the way, neither Marc-Andre Fleury nor Robin Lehner were able to hold the Avalanche from scoring.

It all starts with the penalties. Both games against Colorado were played under Gallant, when the penalty kill was actually more successful than it has been under DeBoer. However, no matter which PK strategy Vegas uses, Colorado has a high probability of shredding it. The Avs ability to enter the zone with speed will give the passive forecheck PK fits. The simple solution is to stay out of the box, but that’s easier said than done against a high-tempo team. The key will be to avoid the foolish penalties. No offensive zone penalties, delay-of-games, or too-many-men calls. If Vegas can avoid those, the three or four they give in the D-zone shouldn’t be the difference in the game.

Maybe as importantly, when the Golden Knights have the man-advantage, they absolutely cannot concede as they have twice this season against Colorado. It’s one thing to let power plays go without scoring, but giving up shorties can and will sink the Golden Knights.

Finally, clean exits of the zone will be crucial. In the first two games, the Colorado forecheck ate up the Golden Knights breakouts at times. That turned into quick offense for the Avs and Vegas falling into holes they couldn’t get out.

Also easier said than done, but in the games against Colorado, Vegas looked like an old slow team compared to the upstart Avs. Remember how games looked in Year 1 when the Golden Knights were all over teams? That’s how it looked but in reverse vs. Colorado.

It starts by dismantling the forecheck with solid breakouts, but then continues through the neutral zone where the Avs feast on turnovers. If Vegas can make Colorado come the full 200 feet when entering the offensive zone, they’ll have a much better chance of slowing down a dangerous Avs attack.

The Avs are one of the few teams in the NHL with a forward group as deep as the Golden Knights. Even the stacked Karlsson, Stone, Pacioretty line might come in second to MacKinnon, Rantanen, and Landeskog. So, it’ll be up to DeBoer to find the right matchups.

The place where the Golden Knights should have the biggest advantage is on the 3rd line. A line of Tuch, Stephenson, and Roy or Cousins should be able to generate offense against any of the Avs four lines and will have no problem defending any line other than the Avs top line.

As good as the Golden Knights 4th line has been, the Avs is probably better. This likely means minimal minutes for the Vegas 4th line and/or multiple attempts to steal offensive zone shifts against Colorado’s 2nd or 3rd lines.

All in all, DeBoer is going to have to be on his game to help assist his forward group in finding time and space to create opportunities. There are matchups in which the Golden Knights will have an advantage offensively, but he’ll have to maximize them if Vegas wants to reach the necessary three goals it’ll likely take to win that big round-robin game.