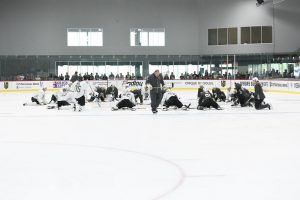 Let's talk about a feeling we wish wasn't familiar after Game 1. https://twitter.com/i/broadcasts/1nAJELZjDngGL

Periscope coming up in about 45 minutes. We've got a lot to talk about after that one. Aiming for 4:15.

"It was an easy decision," DeBoer says about the goalie decision citing Fleury's regular season as a whole and how well he played down the stretch.

"It's not like they smothered us defensively. With Patch out of the lineup we've got to have other guys finish off those chances. I thought we had enough looks to get one." -DeBoer

"We outplayed them for a majority of the game. We've got to find ways to score. It's not just finding those dirty areas. You've got to make plays. You can't just rely on 40-45 shots." -Mark Stone