Rookies Considered “Long Shots” To Make The Roster Next Season

As Development Camp approaches, “when will these guys play in the NHL” is bound to become the prevailing topic du jour. However, the general manager of the team has been preaching a message of patience.

UPDATE: CHL/AHL/NHL rules do not allow Glass or Suzuki to play in the AHL next season. Both are too young. So, like this season, if either do not make the NHL roster out of camp, they will be returned to their junior team and cannot join the NHL roster until their junior season is complete. 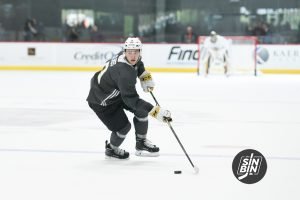 Brannstrom might have the most experience against men, but Glass could easily turn out to be the closest to ready. (Photo Credit: SinBin.vegas Photographer Brandon Andreasen)

Erik Brannstrom (2017, #15 overall) played his entire season in the professional league in Sweden and was one of the final cuts on the Swedish World Championship team at the age of 19. He may be the most “pro-ready” but defenseman usually take a bit longer to make it to the NHL.

Finally, Nic Hague (2017, #34 overall) was named the best defenseman in the entire CHL. This award has been previously won by Ryan Ellis, Karl Alzner, Dougie Hamilton, and Ivan Provorov. The problem for Hague is that due to his size he projects as a much more “stay-at-home” style player and his defensive skating skill is likely not ready to go against the stars of the NHL.

It’s a steep climb for all four of these Golden Knights prospects to make the team and while McPhee isn’t expecting it, he’s at least open-minded to the idea.

They’re going to have to be really really good to make this club… They are young guys and you are stepping into a league with guys with families and everything else. Sometimes it’s like taking a kid from 8th grade and putting him in 12th grade. It doesn’t always work. -McPhee