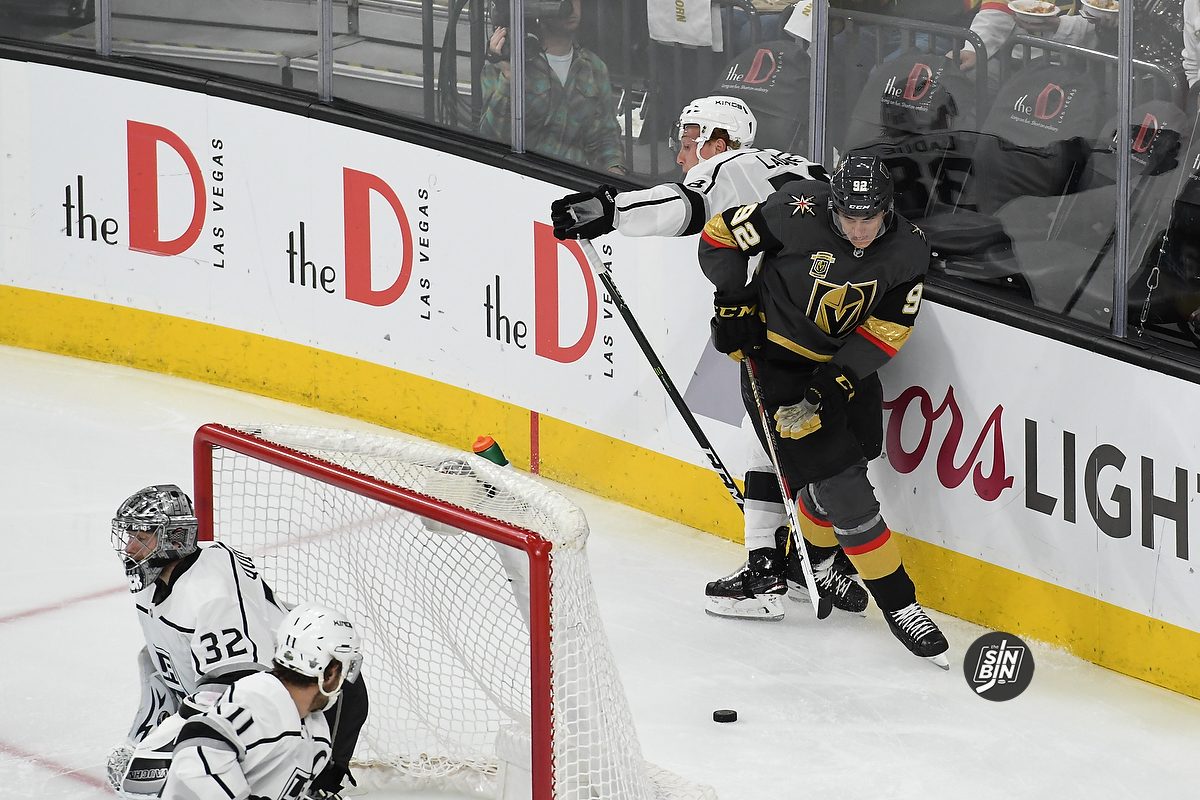 Tomas Nosek is secretly one of the most important players on the Golden Knights. He’s so much more than “that guy who scored the first home goal.” (Photo Credit: SinBin.vegas Photographer Brandon Andreasen)

All-Star head coach Gerard Gallant created a few cliches for his team that he’s spent the last six months repeating to the media every chance he’s gotten. Things like “one game at a time,” “work hard and have fun,” and “roll four lines.” They are all obvious for a coach, but usually, they have little actual meaning and are more like those motivational posters supposedly successful people hang in their office.

Every once in a while though one of those sayings manifests itself from a cliche into reality. The Golden Knights won Game 3, and are now ahead 3-0 in the series because of their conditioning, because after a double overtime game in Game 2, Vegas came back and was the fresher team for 60 minutes, and especially the last 20. That’s not because they were taking it one game at a time or that they were working harder than the Kings, it’s because they’ve rolled four lines all season long and it’s allowed them to keep playing the same way, with the same speed and ferocity, even after a 95 minute marathon two days prior.

We’ve never relied on anybody to create all the offense or all the defense. It’s really a great job by Turk (Gallant) to stay the course with that. There were games this year where we were losing and maybe a couple guys wanted more ice time but that’s why he coaches that way so that situations like this happen in the playoffs and we just play the same way. -David Perron

The Golden Knights did not have a single player in the top 50 in total ice time in the regular season. William Karlsson ranked 30th among centers in average time on ice, and Vegas’ first winger to appear in the ATOI rankings was Reilly Smith at 38th among all wingers.

The reason Gallant spread his minutes out all season wasn’t that he had Game 3 of Round 1 in mind, it’s because he could get away with it. Most coaches want to roll four lines and keep everyone fresh, but they can’t because there’s a major drop-off in play from top line to bottom. Most teams, like the Kings, have a group of high-end players and a group of below average players. Not the Golden Knights.

Whatever shifts we got we created those bounces that created those momentum shifts and we know the bench gets excited when we play that way, so it’s not that difficult for us to recreate that. -Pierre-Edouard Bellemare

Vegas’ fourth line of Bellemare, Tomas Nosek, and William Carrier put in important shifts at important times against the most important players on the other side, and they have one job on their mind.

We don’t have to score, we just have to create momentum for the team. -Bellemare

Because of that fourth line playing important time, the longer the games have gone, the better the Golden Knights have gotten.

Our top guys play a lot of minutes on PK and power play, so when you throw that fourth line out there it gives them some time to rest but they also gain momentum for our club most of the time. -Gallant

It’s not just that Vegas is deep, it’s that they use that depth. Gallant trusts Bellemare and the fourth line to take defensive zone start shifts against opposing team’s top lines, and not only survive but thrive. They’ve done it all season long, and they did it again in Game 3.

So, when the game heads to the final period and the Golden Knights are down a goal, they aren’t worried, they are ready, because they know they are the more conditioned team. And it’s not because they have better trainers, stronger lungs, or some cheat code that allows their legs to never stop moving, it’s because they simply their players don’t play as much as the players on the other team.

Gallant has been preaching it all year long, and last night it paid off and big.