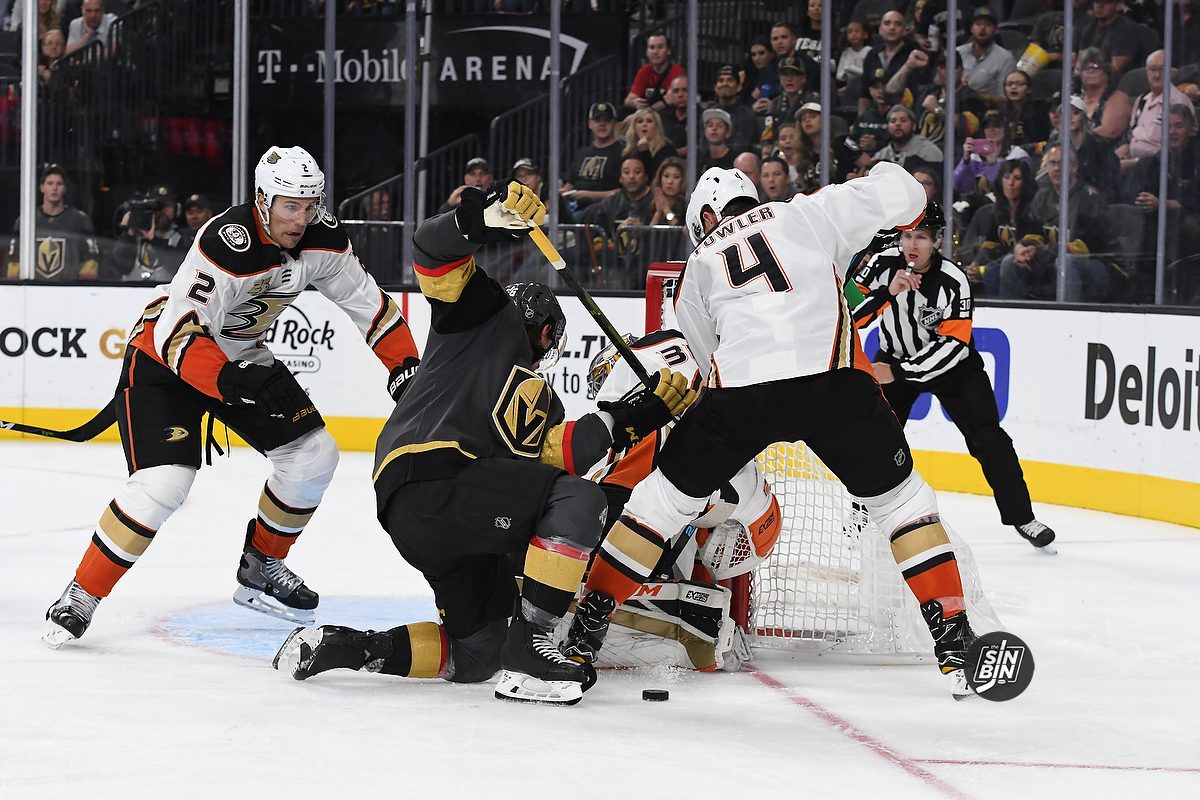 The entire night it looked like VGK had an extra man on the ice. At times they did, but most of the time it was because of their tenacious forechecking. (Photo Credit: SinBin.vegas Photographer Brandon Andreasen)

Midway through Saturday’s game against the Anaheim Ducks, I tweeted this.

The Golden Knights were up 2-0 and were all over the Ducks in all three zones, but what prompted the tweet was a specific shift by Cody Eakin, Tomas Nosek, Ryan Carpenter, Brayden McNabb, and Colin Miller that belongs in an instructional video on forechecking.

There were plenty of others similar to this shift, but this one is spectacular. Eakin actually loses the draw, but Carpenter jumps into the play and saves it. The puck is then sent in deep and that’s when the dominance begins. The Ducks have possession of the puck four different times and never come close to getting out of their zone. The puck is put into the crease on three different occasions, all high danger scoring chances, and the only reason the Ducks end up escaping is because Eakin unfortunately steps on the puck on a great pass from Miller that could have been another great scoring chance.

They’re a good skating hockey team. If we don’t execute with the puck in our zone, they’ll be on us all night. -Ryan Getzlaf, Ducks forward

That is what led the Golden Knights all the way to the Stanley Cup Final, and it’s what’s been missing over the course of the first five or six games of the year.

When we forecheck well, work hard and get our defensemen involved with the forecheck it’s a big part of our game. I thought we did that last game like we did all last year. It really showed. -Gerard Gallant

Pretty much everyone agreed.

I love the way our forwards have been playing. It’s a lot easier to keep it simple and we have that speed to get pucks deep and get them back quick. -Shea Theodore

That’s our game. Forechecking is a big part of our game. I think the fourth line has shown us for the last couple of games now. All four lines are really going and working hard. That’s when we’re tough to play against. -William Karlsson

We are all more connected and we are moving our skates the right way. It’s a five-man unit. We have three forwards pressuring and our D can come and close the zone because they know they have forwards with speed behind them. -Pierre- Edouard Bellemare

Definitely one of our best forechecking games tonight. We put a lot of pressure on their D, we got a lot of turnovers like we usually want. -Jonathan Marchessault

They suffocated the Ducks for a majority of the game. 10 different Golden Knights registered a takeaway, and the advanced stats numbers were tilted so far in favor of Vegas it almost looked like there was a computing error. They had 44 scoring chances, 11 more than any of the previous games this year.

It was definitely our best 60-minutes of the year tonight and it had to be against them. -Gallant

Forechecking is a huge part of the Golden Knights style of play when they are going well. On the road trip, it was absent. Now it’s back, and if they keep playing like they did on Saturday night, another trip to the Final isn’t far-fetched.