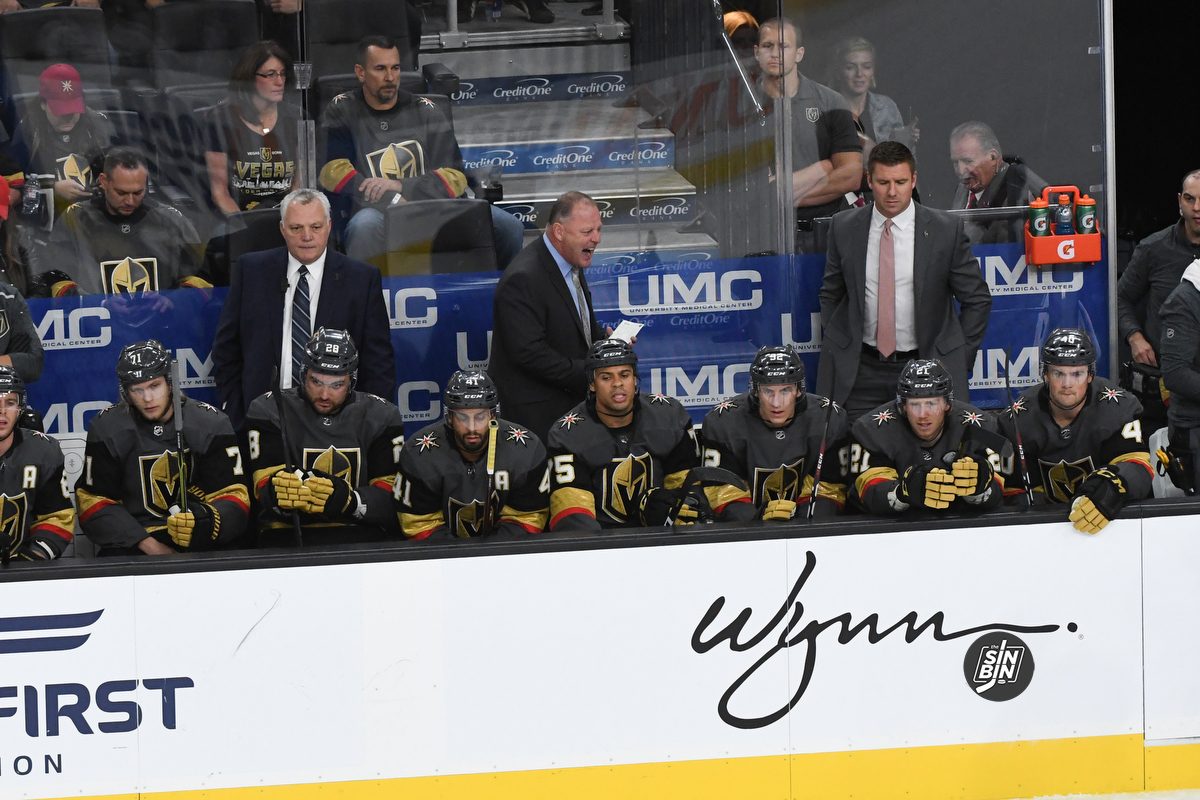 That is also why something has to change. Of course, the easiest change will be made available to the Golden Knights in two games, when Nate Schmidt is eligible to return from his suspension. It will almost certainly help, but relying on one player to completely turn the fortunes of a team around is like walking up to the craps table thinking you’re going to win rent for the month. It might happen, but realistically, it’s probably not.

Following the loss in Boston, reigning Jack Adams winner Gerard Gallant responded to a question about swapping Max Pacioretty and Jonathan Marchessault mid-game with this answer.

If you are not winning you are going to try things. That’s what a coach’s job is supposed to be. So you try and get a little spark. -Gallant

However, the team has barely tried anything nearly a fourth of the way through the season. They’ve made one call-up from the AHL, they’ve made voluntary changes on just one line, and they’ve never swapped more than one defenseman if not dealing with an injury.

A minor switch was made on the power play, swapping Pacioretty and William Karlsson, and the Golden Knights scored on four consecutive attempts. That Pacioretty/Marchessault swap during the Boston game led to a goal from Marchessault’s new line. Change has shown to work, yet to start games, the Golden Knights appear afraid to do it.

From Game 1 to Game 18 in 2017-18, not a single forward line or defense pair remained the same. This year, Marchessault, Karlsson, Smith, Carrier, Bellemare, Reaves have all stayed together every game, and Colin Miller and Brayden McNabb have been partners in all but one game.

Tomas Hyka is the only player called up from the AHL who did not make the team out of training camp. Last year, Vadim Shipachyov, Alex Tuch, Shea Theodore, Max Lagace, and Oscar Dansk all got calls within the first 18 games. Of course, the circumstances are different with many of these, but the team was winning a year ago and still made changes, this year’s team is not.

There’s a famous saying “The definition of insanity is doing the same thing over and over and expecting different results.” Technically, that’s nowhere to be found in the actual definition of insanity, but the point of the saying is legitimate. The Golden Knights, night-in and night-out roll out a similar lineup and receive similar results.

The main reason is that for stretches of every game, they play well. In fact, pretty much every night they completely dominate a period, sometimes two. So, the thought is, if we can just get a little consistency, keeping it like it is will work. Unfortunately, it isn’t happening, and it would be insane (or whatever the word that actually means that saying) to expect it to suddenly begin to happen.

There are 1000 ways Gallant, or McPhee, could impart some change into the 2018-19 Golden Knights. Line changes, D-pair swaps, call-ups, surprise scratches, you name it, it should be considered an option. Simply sitting back and waiting for everything to correct itself is a losing strategy.

The Golden Knights have the reigning Coach of the Year and the reigning GM of the Year. They have the decision makers to get this right. Thus far, they’ve chosen to sit on their hands, and that decision hasn’t been right. It’s time to try something new, and I trust they’ll make the right choice, otherwise, I’m going to go the real definition of insane watching them continue to lose.