Rest Matters At This Time Of Year, Regardless Of How You Get It

Nobody wants to see a player get injured. Whether he is on your team or an opponent.

Every NHL team deals with injuries over the course of the season. How each organization handles it can mean the difference between winning and losing.

The Golden Knights, as you no doubt know by now, do not discuss injuries publicly. That comes straight from general manager George McPhee, who does not want to give the opposition any kind of edge. I’ve broached the subject before so I won’t belabor the point.

This is more about getting ready for the postseason.

When Max Pacioretty landed awkwardly after making contact with Winnipeg’s Jacob Trumba Thursday night, many feared we were witnessing an encore of Erik Haula’s knee injury in Toronto back in early November.

Word came Friday that Pacioretty’s lower-body injury was not as serious as first feared and the veteran winger was listed as day-to-day.

If you’ve followed the Knights, day-to-day sometimes morphs into week-to-week. If Pacioretty is going to miss any games, now’s the time to keep him on the shelf and let whatever he has heal up.

Same goes for Marc-Andre Fleury. I’m guessing if he had to play now, he could. The team never put him on injured reserve. He has been day-to-day for nearly two weeks. And he has stayed out of his crease during that duration. 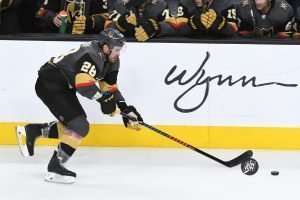 William Carrier has been injured. He is no longer on IR and was back in the lineup Saturday in the 3-2 overtime loss to Detroit at T-Mobile Arena.

Even Haula’s skating more regularly and he could very well be practicing with the team when the playoffs begin in three weeks.

That’s the target — for everyone — three weeks from now.

Resting players, whether they’re hurt or not, is the prudent thing to do. Everyone was freaking out back in January when Fleury was playing every game and people were worried that he was being worked to death. There were fears he was going to play 70 games and would be worn out come playoff time.

As of today, Fleury has played 59 games this season. He’s not going to play 70 games. The time off for his supposed lower-body injury has been a blessing for he and the team. Fleury has been able to stay off the ice, rest his legs, keep his mind fresh as he and his wife Veronique were welcoming their third child Friday.

When the bell sounds the second week in April, No. 29 will be there to answer the call.

So should Pacioretty. In his case, there is no need to rush him back. The Knights have enough depth among their bottom-six forwards that Alex Tuch will do just fine on the line with Paul Stastny and Mark Stone.

Yes, Pacioretty has missed some time already this season. But keeping him off the ice for a week or so wouldn’t be the worst thing in the world. In fact, I expect that will be the case, especially with Carrier back and in need of some game time to shake off the rust from not having played since Feb. 16.

Tomas Nosek and Ryan Carpenter have played extremely well of late. Ryan Reaves has also performed admirably. Brandon Pirri has done what has been asked of him and even Valentin Zykov was in the lineup Saturday against the Red Wings. You add Carrier to the mix and you’ve got six guys who are basically interchangeable playing with Cody Eakin and/or Pierre-Edouard Bellemare.

It gives Gerard Gallant tremendous flexibility. But don’t mention the word “Rest” to Gallant. He’s not a rest guy.

I wouldn’t say it’s ‘rest.’ It’s more about little minor injuries and taking care of them so they don’t become major injuries. When you’re in a flow like we are right now, you want to keep it going. I’m not saying we’re resting guys. I’m saying we’re making sure our guys are healthy. That’s the biggest thing. -Gallant

Fine. Call it what you want. Vacation. Time off with pay. Sabbaticals. Sick leave. But Gallant is right in the respect you want as healthy a group as possible when the playoffs begin. And if it means giving someone a few extra days to heal up and recover between now and the start of the postseason, then that’s what you do.

Everyone is banged up at this time of the year. So you cut corners where you can. You sit out practice. And the practices themselves are shorter. You don’t participate in the morning skate. You do more work in the weight room than you spend on the ice.

His players welcome getting a little break. Reilly Smith was injured in early March against Columbus last year and he missed nearly a month. But it allowed all of his body to heal and he had fresh legs for the playoffs.

I think it helped me last year feel fresh for the playoffs. Sometimes it can be a blessing in disguise. You obviously don’t want to be injured. But our coaching staff does a really great job of giving us option days to take if you need them, especially at this time of the year. You see four or five guys out at pregame skates, and it’s only the guys who really need it. It’s a player to player basis, but I think it’s important to get some rest right now. -Smith

There’s also the mental aspect to consider. The stress of playing every night is enormous and sometimes shutting it down for a couple of days allows a player to reboot mentally.

It’s big. You get a couple of days, get away from hockey altogether. You go for a hike. You play golf. You shut off your phone. Everyone talks about the bumps and bruises and getting some time to heal up from that and that’s important. But mentally, it can be really important to shut it down and get your mind right. -Nate Schmidt

Gallant is always smart about who to sit and for how long. I would think Fleury will be back in net this week, even though Malcolm Subban has played very well in the four consecutive starts he has made. Bellemare and Colin Miller are also likely to get back in the lineup either in St. Louis Monday or Wednesday at Colorado after both have missed the last two games.

I’m guessing Gallant will look to find a way to give Deryk Engelland, Brayden McNabb and Shea Theodore a break between now and the end of the season. Even Schmidt may find himself with time to sneak in 18 holes with a day or two off.

Remember, this is about the big picture. And while Gallant will always say he never looks beyond the next game on the schedule, the fact is, he’s trying to get his team prepared to be at its healthiest come the postseason in three weeks. And he’s absolutely right in doing so.

If you have not picked up your copy of my book, I will have one more
author signing. Come out to the VGK Watch Party at Sunset Station’s Club Madrid this Wednesday (March 27) for the game with the Avalanche. I’ll be signing copies of “Vegas Born.” Cost is just $28.95 but cash only, please.

Hope we get a great turnout and sell a lot of books. This will likely be the final signing so don’t miss out. The signing begins at 6 p.m. and I’ll be there throughout the game at Club Madrid.