Reliving The Previous Two Games Against The Dallas Stars This Season 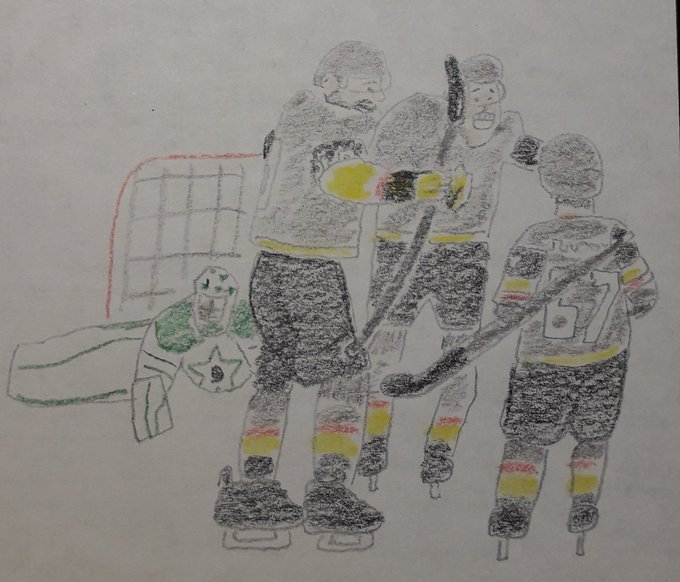 Remember when we used these photos for the playoffs in the bubble. (Photo Credit: SinBin.vegas Playoff “Photographer” @BadSportsArt)

Here’s the good news. This season, these two teams have faced off twice and the Golden Knights were the victors in each. To get ready for tonight’s game, it seems wise to look back at the previous two to see who played, what went right, and what went wrong for the Golden Knights.

In the last game, the home game in December, the Golden Knights were about as healthy as they’ve been all season, save for Eichel having yet to make his debut. The game in October however was a much more limited lineup missing both Pacioretty and Stone, and using Miromanov as a forward.

How the games went

Vegas conceded early, just 2:20 into the period, on a tipped goal from a shot from the point. The Golden Knights’ defensemen, McNabb and Coghlan, failed to get inside position and Luke Glendening had an easy tip-in chance to steer it past Brossoit. The Golden Knights tied almost instantaneously though as Shea Theodore intercepted a clearing attempt and threw the puck on net. It was stick-checked by a Stars player and fluttered along the ice towards the goalie who was fooled by the speed. A bit of a fluky goal.

Vegas allowed another tipped goal early in the 2nd and trailed for a majority of the game after that. Jonathan Marchessault ripped home a one-timer with the Vegas net empty to send the game to overtime. Evgenii Dadonov would win it in OT.

The game was dominated at even strength for the most part by the Stars who outshot Vegas 34-16, outchanced the Golden Knights 44-21, and racked up 16 high danger chances to VGK’s just seven. The final tally in expected goals was 3.03 to 0.9, yet the score showed 2-2 at the end of regulation.

Vegas could not keep the Stars away from the front of the net and needed the best game Laurent Brossoit has ever played as a Golden Knight to even keep them in it. It wasn’t pretty at all, but it was an OT victory in the end.

To be fair though, VGK were playing the 2nd night of a B2B, three games in four nights, and had travel issues getting into Dallas the night before/day of.

This game was the complete opposite of the previous one as the Golden Knights were the dominant force at even-strength. However, special teams made the game an adventure for Vegas, and one they had to climb out of multiple holes to win.

Jason Robertson scored a power-play goal midway through in the 1st period as he used VGK’s aggressive blue-line denying penalty kill style against them. Vegas tied the game just 19 seconds into the 2nd with a tic-tac-toe passing play in transition to set up Mark Stone in a spot he simply doesn’t miss from.

Special teams struck again as Dallas scored two more in the middle frame on the power play, first on a rebound play by Tyler Seguin from a shot through traffic, then on a tip from directly in front of Robin Lehner by Joe Pavelski. This spelled the end of Robin Lehner’s night as Brossoit took over.

The Golden Knights kept at it by drawing a penalty and scoring on the delayed penalty situation (though the 6th skater had barely stepped on the ice). It was Marchessault who once again sniped one from the circle to Brayden Holtby’s right. Pavelski beat Brossoit high glove side to give Dallas a 4-2 lead with about 10 minutes to go.

That’s when VGK made a furious push back into the game scoring three times in six minutes. First, it was Amadio on another play to Holtby’s right. He collected a pass in his skates and quickly fired it on net to beat the Dallas goalie five-hole. Stone got the next one on a transition play where the Golden Knights created a chance on the backdoor leading to a tap-in rebound chance in the low-slot. The game-winner was a wacky one where Pacioretty missed a tip chance and then collected a rebound directly on the goal line. He threw it back towards the net and it hit Holtby’s inner thigh and caromed into the net.

Vegas went 0/3 on the power play while Dallas went 3/3, but at 5-on-5 the Golden Knights racked up 31 scoring chances to the Stars’ 16. It was a crazy comeback in a game that looked like it had gotten away from the Golden Knights. From 4-2 to 5-4 in a matter of six minutes.

It comes down to two things for the Golden Knights, goaltending and perseverance. Brossoit was dynamite in this game and if they had gotten just a good goalie performance and not an elite one, it would have been a sure loss. The shot map made it look like the Golden Knights were purposely allowing the Stars to get into the low slot for shot attempts.

Like many times this year, and on the season as a whole, the Golden Knights were down but never truly out. They kept battling the entire night despite not much going their way and found a way to sneak one in before the buzzer in regulation time, one of their first of many goals with the empty net this season. The lineup was depleted, and the situation was completely against them, but they found a way.

Vegas was overwhelming Dallas in this game at even-strength. They used all four lines the entire night to continue pouring on the pressure. Eventually, the dam broke and the goals started pouring in. They scored in transition, in the offensive zone, from the slot, from the circles, on rebounds, you name it, they got it in this game.

The other piece that was important was what they were able to do to Dallas’ top players. Heiskanen or Klingberg were on the ice for all five goals, Seguin took a -3, and every Stars player was 50% or worse in Corsi for percentage on the night.

Finally, Vegas exposed a weakness in the Stars. The game-tying goal in the previous game came from the right circle, then Marchessault added another, Amadio another, and then Pacioretty’s came from the right side of the net as well. Of course, tonight’s projected goalie Jake Oettinger was not in the net for either game.

Basically everything but the final score. This has actually been the case in multiple games in Dallas including the first game in franchise history. Like Vegas, Dallas has a history of making goalies look like absolute superstars by not being able to capitalize on chances.

Also, Vegas has not found the answer to keeping Stars players away from the front of the goal. It was more evident in the first game but it popped up in the second as well. Inside position is constantly established by the Stars and unlike the Golden Knights, they are actually good at tipping pucks on shots from the point. Spray and execute for Dallas, spray and pray for Vegas.