I’m not one to blame officials for the outcome of games. I always believe that you make your own luck in sports. And I have yet to see a referee actually score a touchdown, sink a basket or put a puck in the net.

But when the officiating negatively impacts the outcome of games, you have a credibility problem. 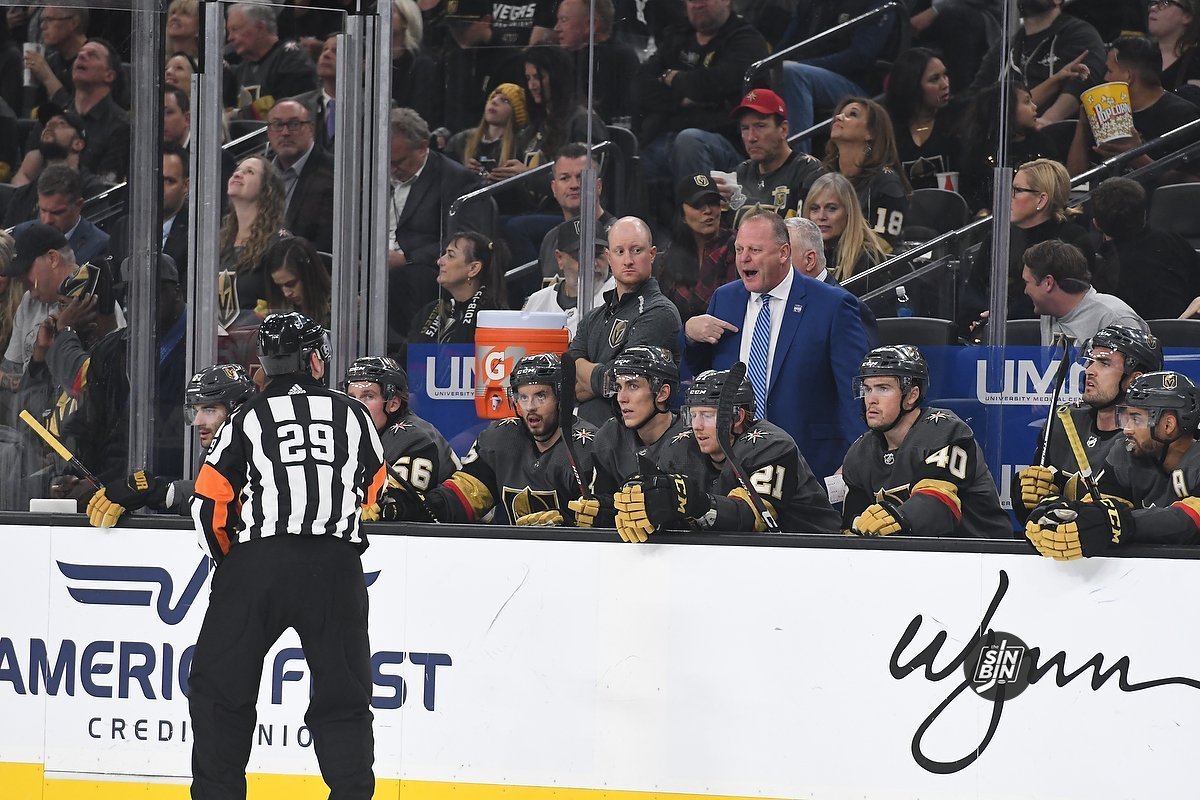 Every team in the league falls victim to inept officiating and the Golden Knights are obviously not immune. I won’t even go into Game 7. I’ll just give you Exhibits A and B from Saturday’s 4-3 overtime loss to Winnipeg.

Exhibit A was Ryan Gibbons’ waving off icing in the third period which led to the Jets tying the game 3-3. The linesman had initially put his hand up for icing, then had a change of heart and waved it off.

Nate Schmidt, who was in pursuit of the puck and was closest to it as it crossed the goal line, could not have made a play. By rule, the whistle should have blown since there’s no-touch icing in the NHL.

Instead, Schmidt loses an edge, crashes into the end boards, Kyle Connor scoops up the puck and feeds Mark Scheifele, who was alone in front and beats Malcom Subban.

Watch the video. Gibbons has his hand up. The Golden Knights players see it and react the way you normally would as they gear down and look to head to the Winnipeg end for the ensuing faceoff.

Instead, there’s never a whistle, the goal counts and there was nothing Gerard Gallant could do about it. It’s a discretionary call by the linesman and not subject to review.

They didn’t really have an explanation. They knew they made a mistake, bottom line. So, we just moved on. -Gallant

The non-call was an obvious game-changer. If the rule is properly applied, it’s still 3-2 Vegas, the faceoff is in the Jets’ end and Gallant can change his lines and his defensive pairings.

Would Winnipeg have eventually scored? Perhaps, given the Knights once again were laying back and letting the Jets dictate the tempo, much like Montreal did Thursday in rallying from two goals down to win in OT, 5-4.

Then again, maybe the Knights get an empty-net goal late and it’s a 4-2 win instead of a 4-3 OT loss. Obviously, we’ll never know.

As for Exhibit B, which is also egregious, was the missed hit to the head on Alex Tuch by Winnipeg’s Adam Lowry in the second period.

Tuch was dropped like a sack of cement by Lowry, who zeroed in on him and from the blindside and lowered the boom on him. A similar hit to Calgary’s Oliver Kylington in the recent Heritage Classic outdoor game in Saskatchewan resulted in a two-game suspension. Saturday’s was Lowry’s first game back.

Watch the video of the two hits and they are nearly identical.

If the NHL’s Department of Player Safety thought the Kylington hit deserved two games, Lowry’s hit on Tuch at least deserves a meeting with Lowry. At most, a multiple game suspension is warranted given Lowry was a repeat offender with a history of delivering hits to the head. That decision from DoPS will be made one way or the other later today.

I thought it was a major penalty, and he obviously didn’t play the rest of the game. I don’t know much more right now. It’s an upper body injury and we will know more (Sunday). -Gallant

No one should like the hit. It’s another problem the NHL has, trying to eliminate head shots from the game. It’s dangerous and can change, and, in some cases, end careers.

Tuch probably went to concussion protocol after getting his bearings. And we know how cautious the Knights are, as they should be, when it comes to concussions. We may not see Tuch for a while, which is a shame given it was his second game back after he had missed the first 13 with an injury and appeared to be playing well.

But if the NHL allows Lowry to get away with those kinds of hits, what kind of message does that send?

Obviously, Gallant and his players were very cautious in their postgame remarks when I asked about the officiating. After all, nobody wants to be fined by the NHL. But you could read between the lines that they’re not happy with the quality of the officials.

There are a lot of new rules and there are tough calls to be made every night. I’m not going to blame the referees for this game, I’m going to blame the way we played the last twenty-five minutes of the hockey game. If they wouldn’t have scored there, they probably would have scored somewhere else because we didn’t play our game. We backed off, we were too loose and I’m disappointed. I think the call was wrong, but that wasn’t the reason why we lost. -Gallant

It’s a faster game now and they have a tough job. Calls are going to happen. We need to do a better job of reacting and play better. -Stastny

Yes, that’s true. The Knights did not handle the gaffe by the linesman well. They didn’t pick up the pace. They didn’t stay out of the penalty box, which allowed the Jets to cut the two-goal deficit to one as Mathieu Perreault scored his second of the game on a third-period power play. They failed to take control in overtime, though at least they had some possession time Saturday.

There’s a couple games now that we’ve backed off, so we need to be more aggressive. We talk about it all the time, when our forecheck is good and our defensive is aggressive on the forecheck, we’re a good team. When our backcheck isn’t as good then our defensemen are back all the time, it’s not going to work. You don’t win in this league doing that. -Gallant

My hope is that George McPhee, who I saw walk through the locker room after the game Saturday looking none too happy, will bring up the officiating at the next Board of Governors meeting or have Kelly McCrimmon bring it up when the general managers meet in Florida in March. This is not a Golden Knights issue. This is a league issue. The officiating has to improve. It has to be more consistent. The rules have to be properly applied. Or, change the rules.

Better yet, improve the process in training the officials. To me, the officiating was so much better years ago. And that was with one referee. The linesmen were usually spot on, from dropping the puck, to calling offsides to blowing the play dead for icing back when you had to make a physical play on the puck.

Something is amiss with today’s officials. Maybe the use of replay factors into this. Perhaps in their minds the refs have a built-in mechanism that tells them if they miss it, Toronto will get it right and all’s well that ends well.

I know it’s a tough job. The game is faster today. But that’s why there are four officials on the ice instead of three. But how about they get the call right in the first place? Now wouldn’t that be novel.

The integrity of the sport is at stake.