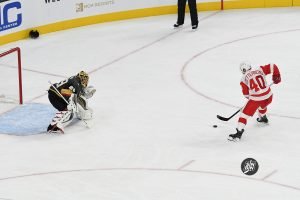 Well everyone knows what Vegas had gone through the last couple of weeks or so. Coming in here and being a part of the atmosphere like this, it shows that it is a strong city and it is a hockey market… I see a future here, and especially the fans were a big part of it. It was loud, it was probably a lot louder than many other arenas. It’s a nice arena to play in, the ice was good. -Henrik Zetterberg, Red Wings forward

Undefeated streak-stomper Gustav Nyquist enjoyed playing in Las Vegas. It’s hard not to when you score twice on the Strip.

I felt like a big part was the fans, loud music and the fans being loud. They’ve been able to put together a great product, it seems like, and a good team too. It’s been a fun experience and a good first visit for our team. You can feel it when you land and you go to the hotels. There’s great energy and people are happy around here. This is the place for many people around the whole world to come and have fun. It’s got good energy in the city for sure. -Gustav Nyquist, Red Wings forward

It’s great to hear opposing players praise the new fanbase. Noise and energy are two things Las Vegas has plenty of. Hopefully, the loud fans Zetterberg talked about will create a strong home-ice advantage. That way, next season Nyquist will have to find somewhere else on the Strip to score.