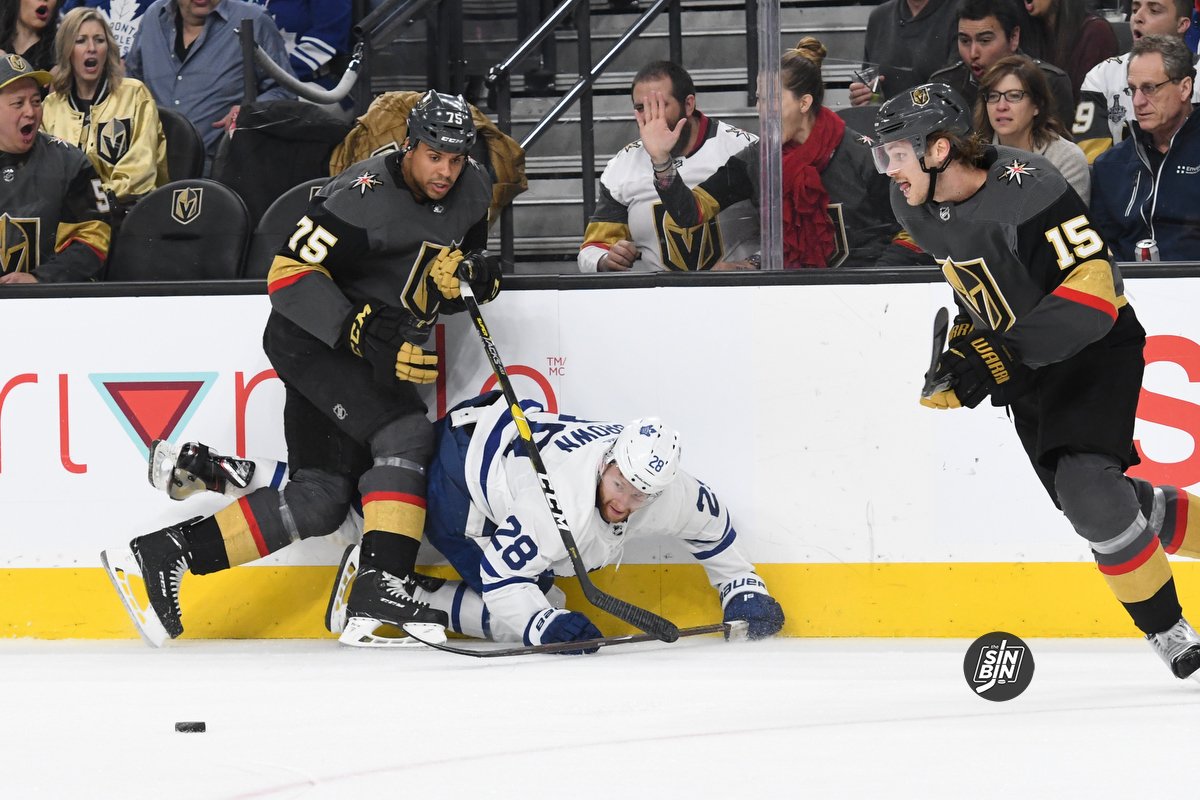 Over the past two and a half seasons since Ryan Reaves was acquired via trade he’s become one of the most popular, recognizable, and marketable members on the Golden Knights.

From the water commercials to the beer company to his unmistakable style on and off the ice, Reaves is one-of-a-kind in today’s NHL.

He’s become a real valuable player to our team, he’s well-respected across the league by both teammates and opponents. He’s not cheap, he’s honest, he’s tough, he’s hard, and he’s a really intelligent player. The coaching staff really appreciates what he does for our team. We’re excited to have him remain in our organization. -Kelly McCrimmon

It’s been clear for some time that both sides wanted to get a deal done and Monday it became official as Reaves signed a two-year contract with an AAV of $1.75 million.

The number is perfectly fair for a player with his offensive production, taking into account the intangibles he brings and his consistent availability having missed just two games since joining the Golden Knights. But the question that must be asked about this contract is one of leverage in negotiations, which was clearly on the side of the team yet didn’t appear to be taken advantage of.

I don’t think it’s a secret that I love it here and that I wanted to stay. I’ve heard people say they could have gotten me cheaper because I have the business thing but at the end of the day hockey comes first for me. The hockey business decision had to be before the beer business or whatever else I do in the community. The hockey had to come first but it had to make sense for me and my family. -Reaves

The “people he’s heard” are me. And they should be anyone else who is concerned with the Golden Knights salary cap too.

As he mentioned in his media availability on Tuesday, it was no secret that he wanted to remain in Vegas. He has multiple endorsements, started a budding beer company that has grown immensely in the past 12 months, built a house in Summerlin, and has never done anything but profess his love for the Las Vegas valley.

Despite what he says now that the contract has been signed, it will remain fair to question whether or not it was ever a realistic possibility that he’d walk away from Vegas if offered an undervalued contract.

Two years ago, Reaves was in a similar spot with his contract, but a much different one personally, in that his ties to the city were much weaker than they are now. He tested free agency, garnered multiple offers, and ended up cashing in with a two-year deal worth almost $6 million dollars.

For me, last time free agency went really well. It can go sideways just as easily. You can go test free agency and all of a sudden they find somebody else or they make a big signing and they don’t have money for you anymore. So it can go both ways and I was fortunate enough that it worked out in my favor last time but I knew I wanted to be here so once the conversation was started, as long as the terms and the money were right for both sides going to free agency didn’t really do anything for me. -Reaves

For Reaves, the deal is perfect. He earns a salary equal to or very close to his market value while remaining in the city in which he’s become a star.

But for the Golden Knights, it certainly appears as though they were gunshy from their last encounter with Reaves in free agency. Last time, McPhee admitted to signing Reaves to a two-year deal for the same amount of money as he would have gotten for three elsewhere, simply because the Golden Knights didn’t want to lose him. But that time, he certainly would have signed a contract elsewhere, this time it’s not as clear.

Vegas appears to have forfeited any leverage they had in negotiation based on Reaves’ affinity toward the city in order to avoid a possible repeat of July 2018.

In the end, it’s only a few hundred thousand dollars that the Golden Knights may have missed out on, and in a town known for gambling, maybe it just wasn’t a risk the VGK front office was willing to take. But there’s no question that time was on the Golden Knights side and they opted not to use it.

So, for the second time in three years, Ryan Reaves has capitalized on the Golden Knights front office. Last time it wasn’t that surprising, like Reaves beating someone up in a fight. This time though, it feels like a Reaves goal on the ice, kind of unbelievable that it actually happened.