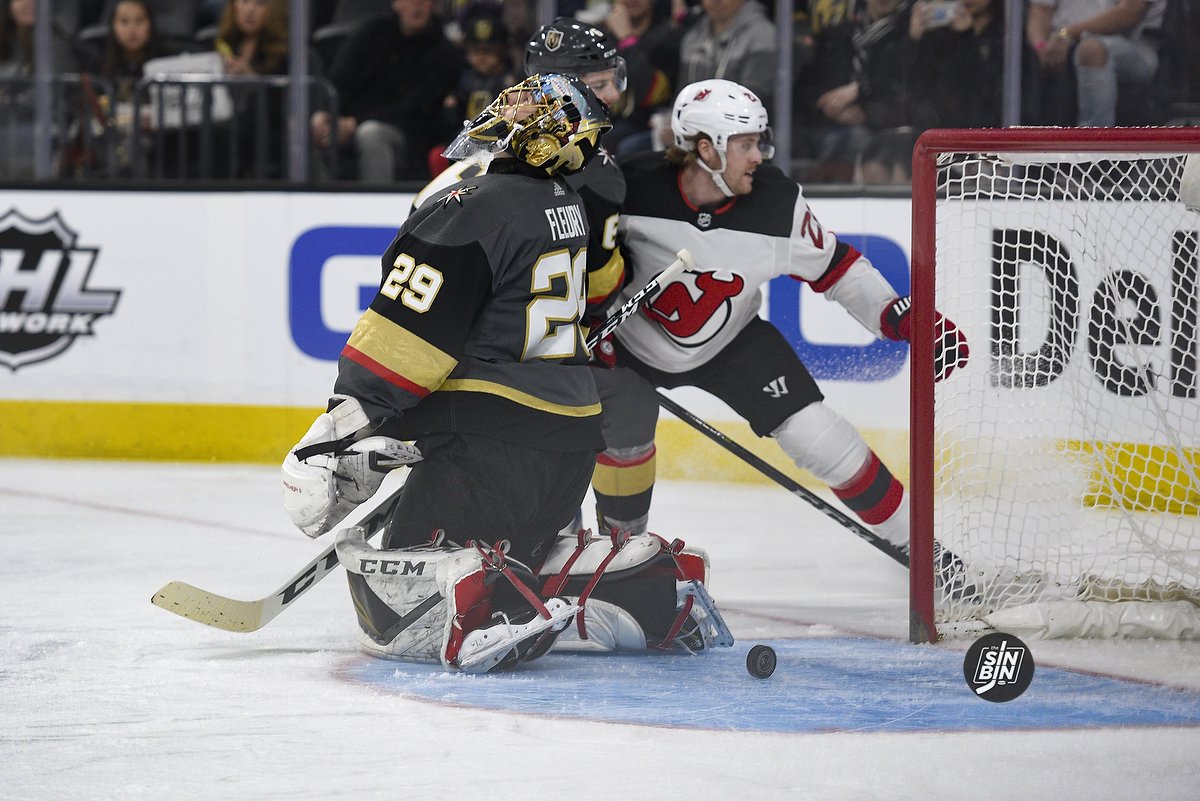 The clock is ticking on the “first order of business” for the Golden Knights this offseason. With the buyout period open and free agency set to begin on October 9th, the VGK front office will have to execute whatever plan they have in mind to solve their conundrum between the pipes soon.

Yesterday, in an interview with Jesse Granger of The Athletic Fleury indicated that he has not formally requested a trade, he would prefer to finish his career in Vegas, and he is not opposed to splitting time with Robin Lehner.

I want to stay in Vegas. I thought when I came here that maybe I could retire here. I wanted to end my career here. –Marc-Andre Fleury to The Athletic

That willingness leaves the door wide open for the Golden Knights. There are five options for Vegas. Some are great, some are ok, and some are downright terrible. I’ve ranked them, in order from best-case scenario to worst-case for the organization. We start with the best option.

This is the best realistic result for the Golden Knights this offseason. There have been reports of a handshake agreement on a deal worth $5 million per year between Lehner and Vegas but both sides have denied such deal exists. But, where there’s smoke, oftentimes there’s fire, which means while that deal may not be final right now, it could in the near future. After signing that deal, Vegas would look for a landing spot for Fleury in which the team taking him on accepts 100% of his salary. Obviously, in a perfect world, the Golden Knights would get an asset in return, but in the current landscape, that seems fairly unlikely. So the hope would be that it wouldn’t cost more than a 3rd round pick to make it happen.

If it all goes down that way, Vegas will have saved $2 million at the goalie position, gotten much younger going from Fleury to Lehner, bought an extra three years of goalie contract, and turned their “rental” into a long-term piece making the initial trade for Lehner even more palatable than before. Even if Lehner’s number is closer to $7 million or if the term is shorter, the Golden Knights will have made out well.

Re-sign Lehner. Trade Fleury with a portion of salary retained (or take a player with a significant cap hit in return)

This is the most likely of the five options listed. With the salary cap remaining at $81.5 million and Fleury holding the right to veto a trade to 10 teams, it’s going to be challenging for Vegas to find a trade partner that accepts Fleury’s full contract. Thus, it’s more likely that the team he heads to (which might be a middle man before he goes to a third team) will want Vegas to either retain a portion of Fleury’s contract for the next two seasons or take on an underperforming NHL player with a significant cap hit.

The final outcome from the goalie situation would be exactly the same on the ice for the Golden Knights as the previous option but would end up costing a lot more against the cap. Depending on how exorbitant the added cap burden is, Vegas will then have to make a few moves to just return to being cap complaint, let alone anything they’d like to do to add to their team this offseason.

This option may be the fan-favorite, but beyond it being highly unlikely, it will make the deadline deal look pretty brutal. Vegas gave up a 2nd round pick, Malcolm Subban, and Slava Demin (2018 4th round pick) to play Lehner in three regular-season games and a playoff run that came up short. Plus it caused quite a bit of drama during the playoffs which may have impacted the team’s performance and definitely impacted the way fans view the organization. Either way, the Golden Knights front office will have broken their “no rental” rule and won’t have achieved the outcome they intended.

The Golden Knights would turn the keys back over to a goalie they benched in the playoffs and remain in a position where the goalie of the future is a question mark (actually even more so with Subban now a Blackhawk).

Oh, and there’s also that whole sword with DeBoer’s name on it thing that might be a little awkward too.

Let me just start out by saying while I understand the logic many have behind backing this option, it’s an absolutely horrendous idea as it is guaranteed to negatively impact the Golden Knights’ chances to win the Stanley Cup in 2020-21 compared to any of the previous options.

Vegas would be looking at upwards of $12 million in cap space tied up to a position that can have only one starter per night. Sure it may work out nicely in the regular season (even that’s debatable), but come playoff time the Golden Knights will be forced to sit at least $5 million of salary cap space on their bench every single night. That cap space could instead be used to upgrade a position that will play every game.

The Golden Knights were wiped out of the playoffs by the Dallas Stars in five games and went through an eight-game scoring drought that pretty clearly proved the roster needs improving this offseason. Keeping both goalies not only means they will have no cap space to improve the roster, but they’ll actually have to move a current piece out just to remain cap compliant. All so that they can have a minor upgrade during the regular season and no upgrade at all in the playoffs.

This is a terrible idea, even if your heart tells you otherwise.

This is an option you’ll likely hear thrown around a lot, especially considering today is the official opening of the buyout period, but this option should only be considered by Vegas as an absolute last resort (and even then they should keep working to try and come to a better conclusion).

Let me first explain how a buyout works in the NHL. Prior to each season, teams have the option to end a player’s contract by buying it out. The team owes the player 2/3rds of the remaining contract and the player is no longer a member of that team. The team is charged against the cap for that player’s salary over the course of the next four seasons.

In other words, if the Golden Knights were to buyout Fleury, a cap hit of more than $2.5 million would remain on the Vegas cap for 20-21. Add in whatever Lehner signs for, plus the backup and you’re looking at around $9 million in cap space towards goalies. Vegas would have gone from Fleury and Subban making $8 million to Lehner and a league minimum backup making closer to $9 million. And that’s just this year. They’d still be paying Fleury against the cap for the next three seasons as well!

Fleury would then be free to sign with any other team in the NHL, likely at a number closer to $2 million than $7 million, and the Golden Knights receive absolutely nothing in return.

This option would turn what has already a nightmare into a complete unmitigated disaster. Vegas would be paying for Fleury against the cap for the next four years all while he is suiting up for another team or maybe even retired.

Whatever happens, if you hear the words buyout and Fleury in the same sentence, know that the Golden Knights royally s**t the bed.