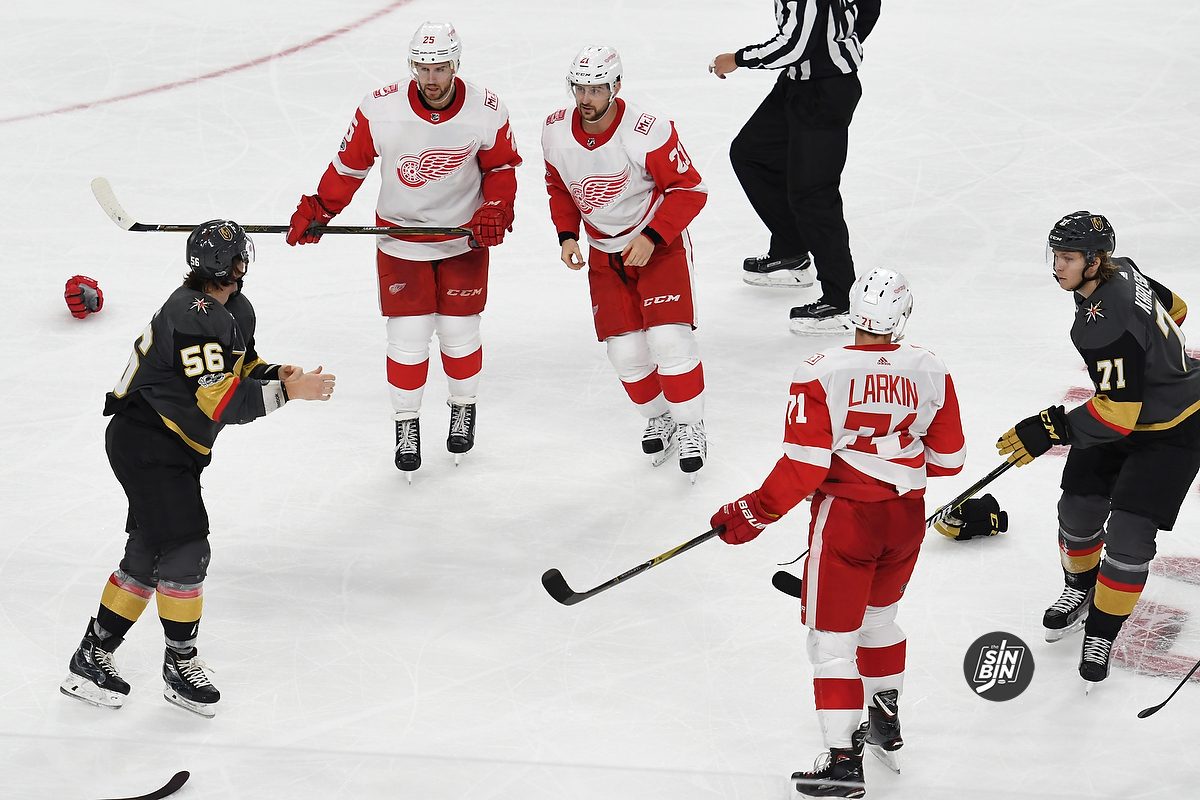 Hopefully Tatar and Haula can move past the hit that caused this tussle. (Photo Credit: SinBin.vegas Photographer Brandon Andreasen)

We’ve known (they are all in for us) for a long time. They kind of gave us a game plan of what the next three years look like for the organization, but things change quickly. For us, no one thought we were going to be anywhere near where we are right now. You’ve got to adapt so the people upstairs they are the brains behind everything, they are the ones pulling the strings. As players, we know that we have something good going and we are going to keep challenging. -Luca Sbisa

We’ve believed in them all year long. They’ve played very very well so far. We wanted to keep them together to see what they could accomplish. If we could help them, we wanted to, and we believe we did that, and we didn’t take anything out of our lineup to do that. -McPhee

We’re pretty tight. We started from scratch and the chemistry worked right away. It’ll be fine. It’s just one guy. Everyone will take him in and I’m sure it’ll be fine. -Marc-Andre Fleury

We just want him to fit in with our group. He’s a character guy, he’s a veteran guy and he can help our team win. I think you guys know from day one that I try to play four lines as much as I can. If they are playing well everybody’s going to play, so obviously if he’s playing he’s going to play more than four minutes. -Gallant

Especially since I’ve been the guy that’s gotten pushed out the last couple years, it’s difficult at first, it’s hard to see the big picture of what can happen. As we saw last year a lot of things happened for me and I ended up getting to play when guys hurt, so you need that kind of depth. -Nate Schmidt

I wasn’t interested in moving any of our players. This team deserves to stay together. To flip players might have gotten us something nice for the future but we are trying to win right now. -McPhee

There’s always a scramble. If you talk to the guy from Central Registry he will tell you that about 90% of the deals were sent in between 2:45 and 2:55 EST. A lot of things are done at that time because the sellers are trying to wait as long as possible to maximize their return. It’s really not inconsistent with other trade deadlines I’ve seen. You have a framework in place with several teams and it’s just about seeing if there’s another deal that’s going to affect this and then we are going. -McPhee

It never hurts to have size, especially when you get to the playoffs. People are aware of when he’s out there. A guy you hate playing against, but love to have on your team. -Sbisa

It’s good, it’s good. Obviously every team is trying to get better by Monday. Ryan’s a guy that knows the game well, he’s been around for a long time. He plays very solid. He brings body checks, he brings a little size on our team. The West has a lot of big teams, a lot of big guys. It’ll be nice to have a guy like that to play with us. -Fleury