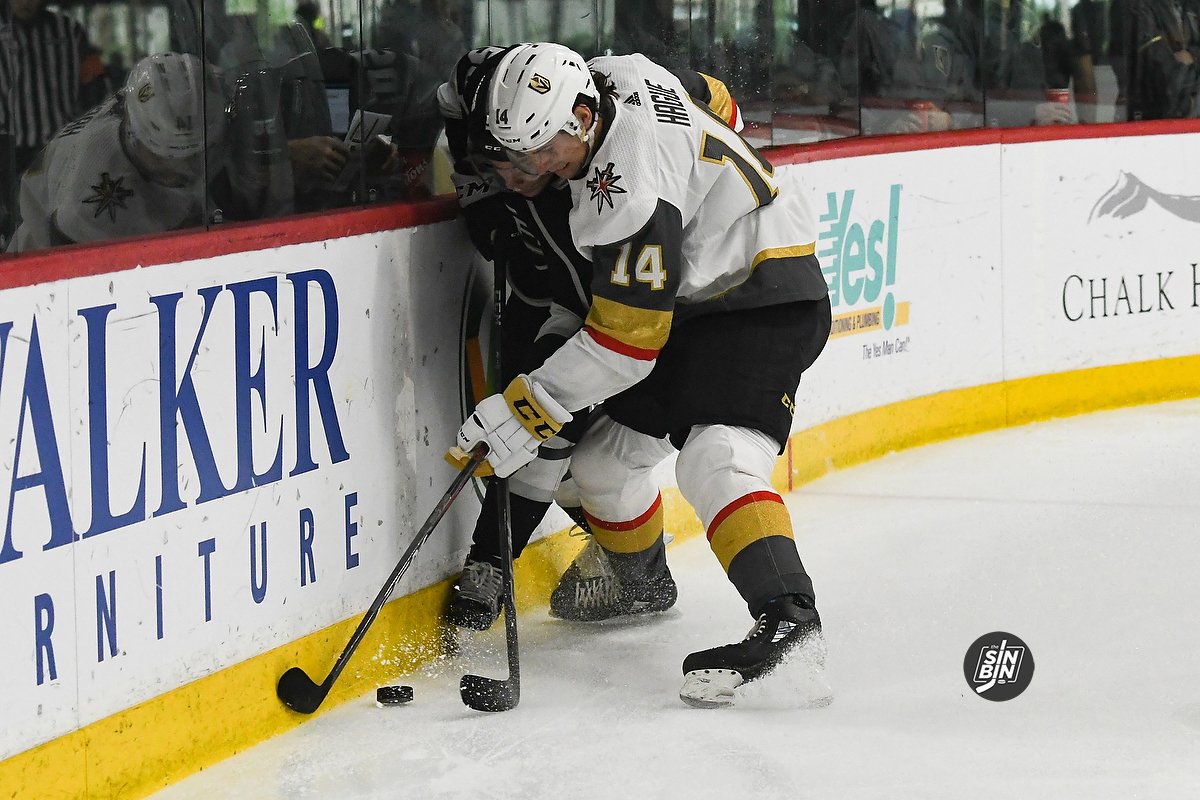 When Golden Knights training camp ended and the team headed into Opening Night against the San Jose Sharks, Nic Hague was on the NHL roster.

He was a healthy scratch the first game of the year, but an injury to Nate Schmidt thrust Hague into the lineup. He played seven straight games and was replaced by Jake Bischoff for four. He played one more at the NHL level before being assigned to the Chicago Wolves upon Schmidt’s return.

Obviously I go down there and I’m in a position where I’m playing big minutes, I’m on the power play, penalty kill, regular shift 5-on-5, so to go down and get a touch in all those areas it was nice, but I don’t want to be there, I want to be here. -Hague

Hague played in four AHL games, racked up two points and 13 shots, while playing top-pair minutes. But it’s what happened after those four games that really seemed to change the course of Hague’s young NHL career.

Since coming back to the NHL on November 5th, Hague has played in every game but one (VGK’s worst game since, at Washington).

Truthfully I think the more those kids play the more confident he’s going to get. When they look confident on the ice, when you notice it and when I notice it, that’s when you are going to be an NHL hockey player and that’s what I’ve liked about him lately. -Gerard Gallant

Hague’s play since coming back has been substantially better than it was in his first stint in the NHL to start the year. He’s standing guys up at the blue line, his gap control has improved, he’s been more physical, he’s starting to utilize his long reach, and most importantly, his offensive game is beginning to shine through.

He’s been way more confident with the puck. Often now you see him not dumping it in every time he’s got it. That’s where you see the maturation process in a player and you see it with him. -Nate Schmidt

Personally, I think that four-game stretch in the AHL made a huge difference for the giant left-handed defenseman. There are stats that point to it, but it’s more about how he looks. His reads have been better and quicker. His decision-making in all three zones has improved, and for the first time in his career, we finally saw him take advantage of the length of his stick to help create a goal against Chicago.

I don’t know what it is, whether it’s playing a couple of games down there or just every game I play here I feel better. Experience is a big part of this league. You get put in different positions every game and you learn from those and it makes you a better player. -Hague

It’s no coincidence that the improvement came following a trip to the AHL. In Nate Schmidt’s time with the Washington Capitals, he bounced back and forth from the NHL to the AHL for two full seasons before finally sticking in his third. He has a theory on what Hague may have experienced in that short time in Chicago.

Playing in the NHL is easier. Not to discredit guys in the minors, but in the NHL, passes in skates, guys pick up. If you miss an assignment, a guy is there for you. It’s a little bit more structured. You know where guys are supposed to be. If he’s not there, it’s on him. So sometimes it was harder because it was a little bit more unorganized. That’s what makes consistency so much more important because you can’t go rouge like you can in the AHL. -Schmidt

The d-pair swap from Engelland to Theodore may have helped too.

Nic has been really good these last couple of games. His confidence is growing and he’s playing with Theodore so he doesn’t have to worry about doing some of the things he’s asked to in the AHL. -Schmidt

It’s almost certainly a mix of both, but the long and short of it is the difference is noticeable and it’s been a huge reason why the Golden Knights have been playing better defensively as a unit.

Letting a rookie flourish in the lineup was one of the goals of the Golden Knights offseason. Instead of crowding out the likes of Hague, Bischoff, Dylan Coghlan, Zach Whitecloud, and Jimmy Schuldt, with players like Colin Miller, Nick Holden, and Deryk Engelland, the Golden Knights committed to giving a rookie that chance.

Hague got the first shot, and he looked like a rookie. He lost it, got it back, lost it again, and now has seemingly staked a claim to it in perpetuity following an impressive stretch of eight games.

And the best part of it all, this is just the beginning of the maturation process for a player that’s yet to even reach the legal drinking age in the United States. Most of the talk early this season has been how badly the Golden Knights need to add a defenseman to the mix if they want to compete for the Stanley Cup. Nic Hague is trying to prove the word “add” should instead be “develop.”

Through 15 games, he’s come a long way. Imagine what he might look like with another 60 under his belt by the time the games really matter.