April is always an interesting time for prospects, and it’s especially interesting this year with the NHL schedule pushed back a few weeks meaning we’re still in the regular season instead of starting the playoffs as we normally would be at this time.

The NCAA schedule has remained on track which has led to a flurry of signings around the league as each player’s respective season ends. On top of that, the KHL season came to an abrupt end for many players including a top Vegas prospect in Ivan Morozov. Here’s the latest on a group of VGK prospects that have decisions coming up soon.

Brisson’s Michigan Wolverines were eliminated from the Frozen Four on Thursday. Quickly after, Brisson’s teammates Owen Power, Nick Blankenburg, and Kent Johnson inked contracts with the NHL team that held their rights. Another teammate, Matty Beniers is expected to do the same with Seattle soon.

Brisson finished his sophomore season at Michigan this year leading the team in goals. Vegas holds his rights through August of 2024, but it appears probable that Brisson will want to leave school to sign his entry-level deal this year as opposed to playing out his junior and senior years at Michigan.

If Brisson does indeed want to turn pro, the next decision will be whether or not he and/or the Golden Knights want to burn the first year of his entry-level contract. If he signs prior to Vegas’ season ending, the first year of his three-year contract will elapse meaning he’d become an RFA in the summer of 2024. If they wait until after this season concludes, he’ll be under contract for three more seasons making him an RFA in 2025.

The clock is definitely ticking, but there’s still plenty of time for the team and player to come to the agreement that works best for both using either option. Brisson would be eligible to play for the Golden Knights immediately and in the playoffs should they make it, but both seem rather unlikely at this time.

Morozov was the first player selected in the 2018 Draft by the Golden Knights after they traded away their 1st round pick for Tomas Tatar at the deadline. Morozov has done nothing but impress since, playing at World Juniors, the IIHF World Championship, and multiple seasons in the KHL.

His KHL contract officially expires on April 30th, but as we’ve seen in the past with Nikita Gusev, teams can come to an agreement to terminate it early.

Morozov is currently in Las Vegas and was seen at the Henderson Silver Knights game last week chatting with VGK Director of Player Development, Wil Nichol.

He is in a similar situation with his contract as the team could choose to burn a season or simply wait until the offseason and have him locked up through 2024-25. 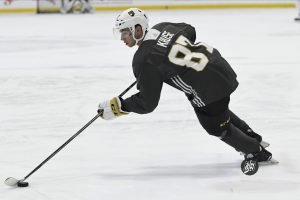 Kruse played five seasons in college including four years at Bowling Green before transferring for his graduate year to Boston College. When his season ended he quickly signed an AHL player tryout contract (PTO) with the Silver Knights. Kruse played in three games registering one point before he was released from this contract.

Campoli played out his college eligibility at Clarkson University. The Golden Knights hold his rights until August 15th before he becomes an unrestricted free agent. Campoli has not been offered a contract with either Vegas or Henderson which indicates Vegas will likely allow his rights to expire.