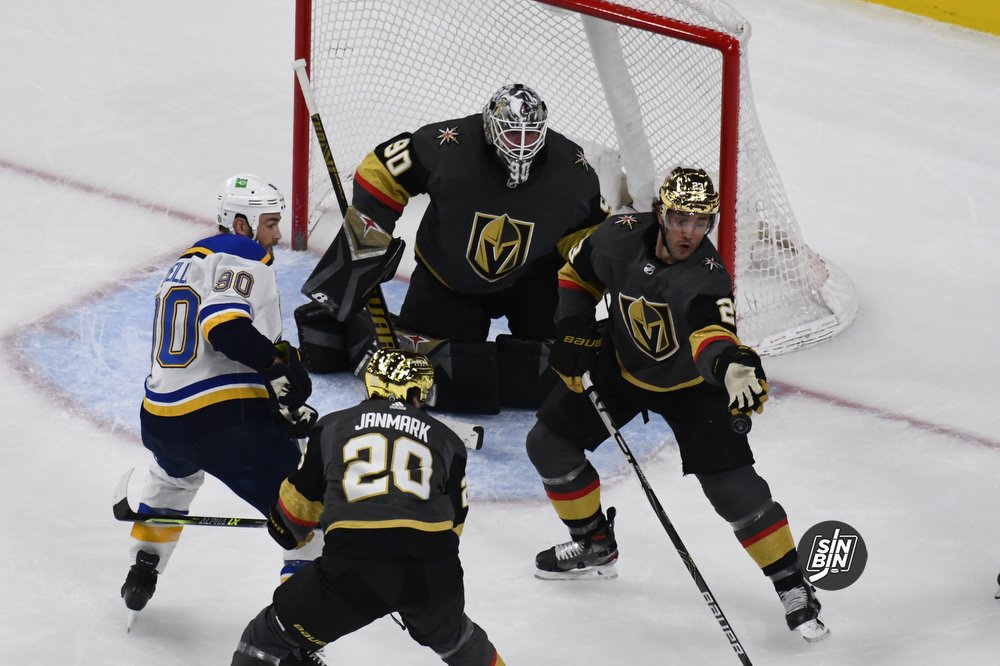 The Golden Knights could add a few pieces around the edges. They could go for the blockbuster and trade for Jack Eichel, Seth Jones, or Vladamir Tarasenko. They could do absolutely nothing. The options in Vegas this offseason are endless.

Next week we’re going to be publishing a series of articles giving our final guesses. Jason and I will take turns playing GM for a day and coming up with our perfect offseason if we were in charge, and then we’ll collaborate for what we think the guys who are actually in the front office will do.

But before then, let’s play the guessing game using percentages.

Will a goalie be traded?

For a variety of reasons it didn’t happen last season and many of those same reasons still exist now. Plus, unlike last year when they were two years away, the Golden Knights are now one year away from lowering the $7 million cap number on Fleury and having both goalies under contract at a much more affordable price. Biting the bullet for one more year seems like the runaway favorite, but 15% isn’t nothing.

Will the Golden Knights trade for Jack Eichel?

In the end, it’s just going to cost too much. Too much to get the player, too much to pay him, and too much to get the rest of the roster under the cap. The Golden Knights are doing the right thing checking in, because if the price drops as low as it did on Mark Stone they should absolutely do it, but it probably won’t. And, there’s always that neck injury lurking in the shadows which ups the risk and thus lessens the probability even more.

Will Alec Martinez re-sign in Vegas?

Yeah, cop-out, I know. It’s just so hard to call this one because the motives of Martinez are unknown. He has two Cups, he’s made a ton of money, and he’s never really lived in Vegas when Vegas wasn’t under COVID restrictions. Who knows what he really wants and who knows how much another team might offer him after they lose a decent defenseman to the Expansion Draft.

Will a member of the Misfit Line be traded?

The question will surround the value they’d get in return and how they can use it to go about replacing that player. Smith being on the last year of his deal makes him the most likely to go but it weakens his trade value as well. I don’t think they’ll actually do it, but I do believe they’ll be fielding plenty of calls on all three of them.

Will the Golden Knights add a new player worth at least $5 million against the cap?

The Golden Knights love the blockbuster move so they are obviously going to be poking their head into every room asking, but in what might be a wild offseason it’s much more likely VGK are left out this time as opposed to being the center of attention as they usually are.

His press conference following the playoffs certainly made it seem like he was under the assumption that this was simply a rental. However, history has told us that the Golden Knights are not huge fans of giving up assets for a rental. They moved a 2nd and a 3rd round pick for him and while he was good on the ice, they ultimately didn’t achieve what they were looking for when they got him. They probably don’t want to throw those picks away for a player that walks, but they may not have a choice.

Will a former Golden Knight return to Vegas?

There are a few of them out there. Erik Haula and Paul Stastny are UFAs, James Neal might get bought out, Nate Schmidt wants a trade. Familiarity can be a powerful thing but the Golden Knights haven’t gone down this path yet. Maybe this is the year.

Will the Golden Knights add a player from the Montreal Canadiens this offseason?

When they lost to the Capitals they went out and got Chandler Stephenson. Lost to the Sharks, they took their coach. Lost to the Stars, Mattias Janmark was brought in. Heck, even the team the Chicago Wolves lost to in the Calder Cup Final led to Nic Roy and Patrick Brown. There are going to be plenty of options out there for them to choose from and eventually, there probably will be someone from that team on the Golden Knights, it just may not happen before October 12th.

Will the GM, President of Hockey Operations, or head coach be relieved of their duties?

First off, it probably would have happened already. However, that doesn’t mean it can’t still. It just almost certainly won’t.

**If you have any other questions you want me to put percentages on, put them in the comments or send them on social media. I’ll answer as many as I see.**