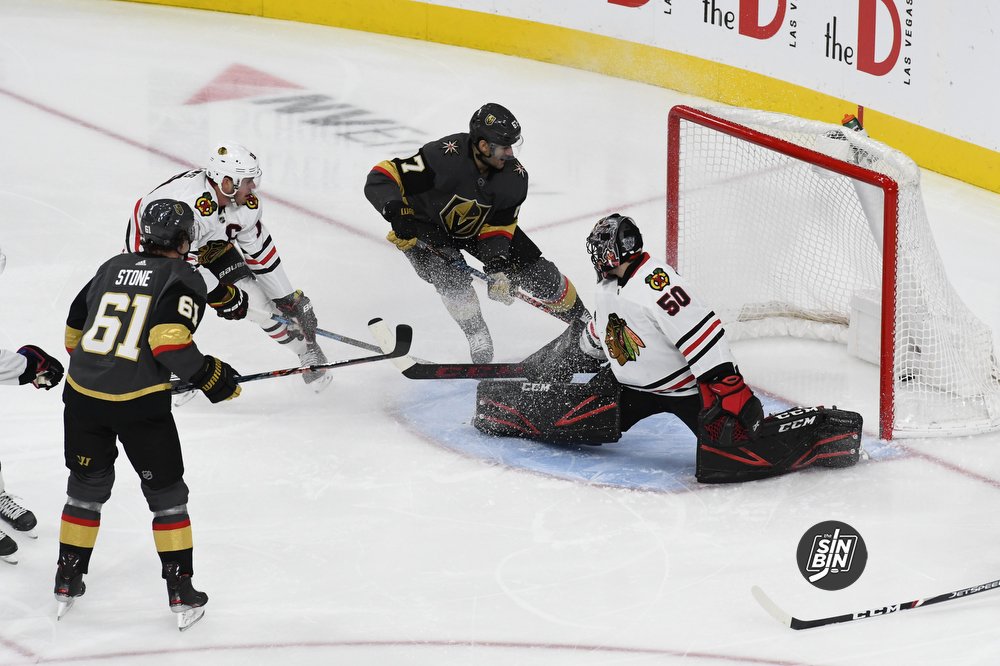 The Cup has been awarded which means the offseason has officially begun. The Golden Knights have already started shaping their roster, most notably with the news of a Reilly Smith extension, but they still have a lot of work to do.

This week we are going to go through a series of articles giving our thoughts on how we’d like the offseason to shake out and how we think it will ultimately go down for the Golden Knights.

Today we start with my (Ken) predicted roster. This is what I expect the Golden Knights to do this summer.

As I detailed in a previous article, Roy is in line for a fairly significant raise. I expect him to file for arbitration but sign a contract prior to the hearing. The Golden Knights will utilize their excellent signing of Chandler Stephenson to set the market on Roy and eventually settle on the same number. It’s a nice bump for Roy, it keeps him in line to hit unrestricted free agency at the age of 27, and it doesn’t break the bank on VGK.

Like Roy, Kolesar’s arbitration rights will earn him a bit more than he’s made in the past. However, I expect a short deal as the Golden Knights look to maintain some flexibility moving forward. Kolesar doesn’t have much to prove as it’s pretty clear the player he’s going to be, so he’ll look to cash in and $1.3 million is a decent payday for him.

I truly believe Hague should refuse to sign the qualifying offer and hold out from training camp and ultimately regular season games in an effort to maximize his contract. But, I don’t think he’ll end up going down that road as the risk of the Golden Knights never blinking is far too real. (Read more about the situation here) So, I think he’ll take the qualifying offer and play one more year on a cheap deal before he looks to cash in next summer, which I believe he will to the tune of north of $3 million per year.

This will be a true prove-it deal for Howden as he enters his 5th season in the NHL. Injuries derailed his season last year which caused him to miss nearly half the year. In the games he did play, he was effective, scoring nine goals and posting 20 points. If he played all 82 with those per-game numbers (about 17 goals and 38 points), he’d probably be pushing $2 million, but he didn’t, and thus he’ll have to prove to VGK that he can.

I incorrectly predicted this last year, but I’m going to the well again. While the rest of my moves do leave a bit of cap space available, and possibly enough to keep Janmark around, I think both sides will look to part ways.

With the emergence of Logan Thompson, the Golden Knights simply can’t hang on to Brossoit. They’ll look to find someone to take on his salary and there will be a few teams lining up to do it as Brossoit is an above-average back-up. It won’t return much, but I do believe VGK will come out on the positive side of the deal, whether it is a pick swap or a single late-round pick coming back.

The Golden Knights have to do something to get under the cap, and in the end, I think it’ll land on Pacioretty. His name has been in the rumor mill for the last few offseasons and the fact that he has just one year left will soften the blow for the Golden Knights. The return will actually be a bit better than many except as Pacioretty’s numbers will demand a player and picks back. Unfortunately, the Golden Knights get the wrong Jesper from the Devils (the other one nearly had 73 points last year), but Boqvist is a decent depth forward that will make the VGK roster. He has a bit of upside and the qualifying offer will cost less than a million dollars.

At the past deadline, the Golden Knights were linked to Rakell before he ultimately went to the Penguins. He was good in Pittsburgh but the Penguins are going to have to make some tough decisions as well. Vegas is familiar with the player, he has enough skill to play anywhere in the lineup, and has shown he can score at a consistent pace. The price is almost exactly what he was making on his previous deal and the dropoff in the production the last two years will keep him right there. It’s just about every dollar the Golden Knights will have left to use, but due to the LTIR situation, they’ll have to use them all up.

This will give the Golden Knights a 22-man roster coming in almost right on the nose of the $82.5 million salary cap. Here’s how the team would look heading into training camp.

Next we’ll have Jason’s predicted roster, then we’ll both take our turns to step into the GM role ourselves and mold the roster how we would do it in our “GM for a Day” posts.

SinBin.vegas Podcast #272: Smith’s Back, What’s Next