Playoffs On The Mind

Let’s face it, the Golden Knights are going to the playoffs. You know it, I know it, every player in the locker room knows it, and despite his best efforts, Gerard Gallant knows it. 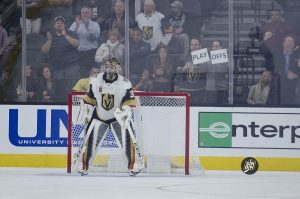 You two, Turk would like to see you in his office. (Photo Credit: SinBin.vegas Photographer Brandon Andreasen)

They lead the Western Conference on New Year’s Eve, have won seven straight games, are on a 12 game point streak, and just completed the month of December at 11-1-1 with wins over Tampa Bay, Pittsburgh, Los Angeles, Washington, Anaheim, and Toronto.

Multiple players mentioned how the team is improving every day, especially when looking back on where they were a few months ago when they lost in Toronto. Then, one Golden Knight, who shall remain nameless for reasons you will soon find out, said this.

We cannot stop. How can you get satisfied with just playing the regular season and winning, that’s nothing. Look at plenty of teams that just make the playoffs every year and they can’t pass the first or second round. It’s awesome obviously, but the real teams show up in the playoffs. For us I think it’s time to start thinking about it and being ready for that for sure. -Anonymous Golden Knight

Then this happened in Gallant’s post-game press conference.

Today is the first time I heard the word “playoffs” mentioned by any player in the locker room. At what point do you start looking towards that and shaping the team towards that. -SinBin.vegas

Who said that? -Gallant

I’m not going to tell you. -SinBin.vegas

You said it? -Gallant

No… I’m not telling you. -SinBin.vegas

Honestly, we aren’t worried about the playoffs. Playoffs will worry about themselves in April. When I find out who that guy is I’m going to fine him. -Gallant

I’ll never tell him who it was. 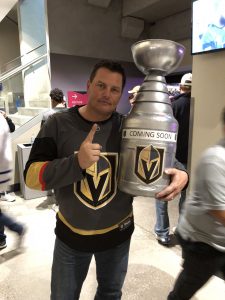 But all kidding aside, it’s a serious question. The Golden Knights have proven they are good enough to beat anyone in the league… in the regular season. The playoffs are a different animal and everyone knows it. Vegas’ story is going to be incredible no matter what, but if they win the Pacific Division and then lay an egg in the first round, what does any of this matter?

Will the Golden Knights simple, quick, transition-reliant style carry over when the games actually have meaning? Drew Pouty doesn’t think so. Randy Carlyle isn’t so sure, and we just found out Phil Kessel isn’t a believer either.

(Kessel) did say this, he doesn’t think they have enough high-end talent to win in the playoffs. He didn’t feel like that was there across the board, but he definitely thinks they are good and they are tough to play against. –Daniel Negreanu on Rink Rats Podcast

It’s time to start thinking about it, even if Gallant won’t.

You know what I’m talking about. We’re one game at a time. That’s what the message has been all year, and it’s not going to change. It’s not changing. We’re going to play one game at a time, work hard and compete and have some fun. And we’re having fun. -Gallant

That is until Turk finds out who talked to me and the fun turns into wind sprints at practice and a donation to Gallant’s “one game at a time” fund.