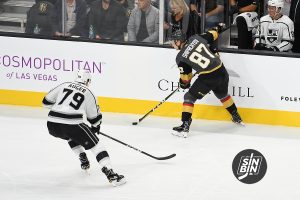 Anybody want this guy? Anybody at all? No? Okay. (Photo Credit: SinBin.vegas Photographer Brandon Andreasen)

Trusted NHL insider Pierre Lebrun was on TSN Montreal yesterday, discussing league interest in Vadim Shipachyov. Fans in Montreal were hoping to hear LeBrun say the Canadiens were wildly interested, especially considering, the Habs are $9M under the salary cap, and their offense is near the bottom of the league. Pierre was having none of that.

I don’t believe the Canadiens have any interest. (Shipachyov) clearly struggled in his three games with Vegas. But I would draw this line as to why I think the Canadiens are taking a pass. Who’s the head coach in Vegas? Gerard Gallant, whose passage in Montreal was really well received. He was really well liked. -Pierre LeBrun

The Vegas head coach is well regarded in Montreal, after his two-year stint as an assistant coach. Apparently, Gallant’s actions may have influenced GM Marc Bergevin. Who, we should note, was reportedly at the T-Mobile arena last week when Shipachyov hit the ice.

I’m only guessing here but they’re probably looking at Gerard Gallant and saying if Gerard Gallant doesn’t want him in his lineup, then why would we? I think this player can play, obviously he needs a change of scenery. There are cases where Russian players come over don’t adjust… it’s hard to believe that in three games you can make that judgement right now, but maybe that’s the case. -LeBrun

Little bit of speculation by LeBrun but most of it was more clear after GM George McPhee made comments about Shipachyov on TSN Toronto. One comment that stands out, is LeBrun’s suggestion that Shipachyov “obviously” needs a change of scenery. Where is that coming from? Possibly, Petr Svoboda.

Svoboda could be floating rumors to enhance league attraction. If Shipachyov and his agent were given the opportunity to shop his contract, it would be in their best interest to create a bigger market. Same with the team. That way, McPhee would be more inclined to agree to a deal. So, just how big is the market for Shipachyov?

I haven’t been able to identify which teams are interested. I can tell you I had about eight or nine GMs get back to me, saying they were not interested. I had one team say to me that they were mildly interested and investigating it. But, aren’t sure if they’ll progress. Obviously, I haven’t talked to 30 teams. -LeBrun

Lastly, the TSN insider brought up the slight possibility of a contract termination. LeBrun doesn’t believe the player would agree to a termination option, but it has been done in the past.

Obviously, if a trade can’t be work out, the other option is a mutual termination of the contract. Like we saw with Alexander Semin… I don’t think that’s what they want to do from the players side, but it’s certainly an option if they can’t work out a trade. -LeBrun

It was a busy day for Vegas news. If Svoboda is working the phones every hour, maybe there will be a resolution soon. Hopefully, Shipachyov’s KHL/NHL/AHL adventure will end well for both parties.