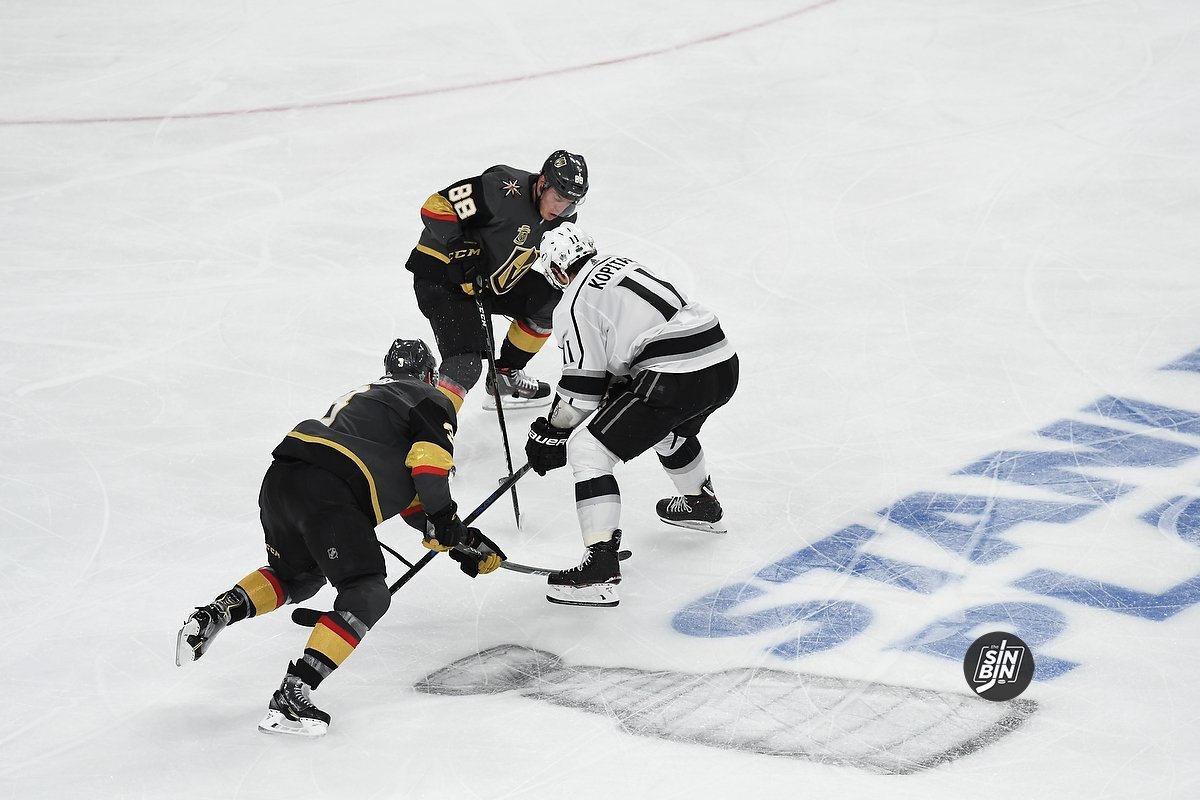 When the Golden Knights take the ice on October 2nd there will likely only be one change along the blue line. Out went Colin Miller and in comes the winner of the rookie defenseman battle between Jimmy Schuldt, Nic Hague, Zach Whitecloud, Jake Bischoff, and Dylan Coghlan.

However, the way they line up may have to change with the new makeup of the defense. With Miller in Buffalo, the Golden Knights are left with just one right-handed defenseman among the guaranteed mix. That leaves plenty of options in how Gerard Gallant and Ryan McGill will set the pairs.

Here’s an attempt to breakdown what each defenseman does best and who they might match up best with.

(Each player is listed with their best match as a partner, other options they could succeed with, and players to avoid. The match is to maximize that player’s skills, it is not necessarily to create the best pair. Other options are ranked in order from best option to worst. Players to avoid are listed in no particular order.)

Schmidt is the swiss-army knife of the Golden Knights defense. He really does it all and it allows for him to be partnered with pretty much anyone. As a mobile puck-mover, he can be paired with a stay-at-home player or he can be put with another puck-mover to create a dynamic pair. Schmidt is able to contribute offense, but he’s also one of the most reliable players the Golden Knights have in their own end. Schmidt has played on both sides, and played with Engelland and McNabb for the majority of last season. However, they have paired him with Theodore on multiple occasions, including in Game 5 of the Stanley Cup Final. It’s never really gone well, but there’s been a willingness to try it.
Best Match: McNabb
Other Options: Schuldt, Engelland, Merrill, Theodore, Hague, Whitecloud, Coghlan, Bischoff, Holden
Avoid: None

The defensive stallwart, McNabb almost has to play with a skater. That being said, McNabb has really been at his best with Schmidt as his partner. Late in the year last season, they put him with Theodore, and while Shea thrived it often led to McNabb being caught in vulnerable defensive positions which was highlighted by the OT goal that ended Vegas’ season. Throughout the two year history, the Golden Knights have really only used McNabb with Theodore, Schmidt, and Engelland and one of those pairs was a nightmare. McNabb has spent the entirety of his Golden Knights career playing on the left side.
Best Match: Schmidt
Other Options: Theodore, Schuldt, Coghlan, Whitecloud, Hague,
Avoid: Engelland, Bischoff, Merrill, Holden

Theodore is a bit of a wild-card as he’s come a long way defensively over the past two seasons. Early in Year 1, he almost had to be with a stay-at-home defenseman due to his tendency to take risks. Over the last 50 games or so he’s become much safer both with the puck and in his own end which really opens the door to trying him with someone new. He’s played mostly with Engelland or McNabb, but has seen time paired with Schmidt or Holden. Theodore made the switch from left to right last season and did well with the change. It actually seemed to bring out his offensive game a bit more at the blue line and his ability to stay solid defensively likely means he’ll be slated to play on the right in 2019-20.
Best Match: McNabb
Other Options: Merrill, Engelland, Schmidt, Holden, Whitecloud, Bischoff
Avoid: Schuldt, Hague, Coghlan

Engelland is a one-trick pony but it’s a trick that no one else on the Golden Knights does. He’s right-handed, he plays exclusively on the right side, and he’s incredibly responsible when defending anywhere but in transition. The question is how much does he have left in the tank as he seemed to fade as the season went on. Early, he’ll almost certainly be in the lineup, but as the season progresses, it will be interesting to see if they’ll keep running him out there. As for a partner, the options are really endless now. He’s played most with McNabb, Schmidt, and Theodore, but the final game of the year he drew the pair with Jimmy Schuldt which could be a foreshadowing of the future. Pretty much anyone but McNabb works.
Best Match: Schmidt
Other Options: Theodore, Schuldt, Coghlan
Avoid: McNabb, Merrill, Holden, Hague, Bischoff, Whitecloud

Merrill had long been the 7th or 8th defenseman but he shoved his way into the starting six as the season went on. His game is heavily dependant on his partner. If you stick him with a defense-first guy, he’ll be a stay-at-home option. If you put him with a skater, he’ll help join in the rush and contribute some offense. He worked well with Miller and was a bit of a disaster with Holden. Merill played every game in 18-19 on the left side.
Best Match: Theodore
Other Options: Schmidt, Schuldt, Hague, Coghlan
Avoid: McNabb, Engelland, Holden, Whitecloud, Bischoff

When Holden was brought to Vegas it was as a replacement for Luca Sbisa. He was meant to be a stay-at-home defenseman who has the ability to chip in some offense from time to time. He also came with a reputation of being able to play either side and do it well. Unfortunately, in Vegas, it hasn’t really worked no matter where he’s been and who he’s been with. He was probably best with Theodore and had limited levels of success with Miller. He’ll likely not be among the starters to open the season, but they’ll have to use him at some point this year.
Best Match: Theodore
Other Options: Schmidt, Schuldt, Hague, Coghlan
Avoid: Engelland, McNabb, Bischoff, Whitecloud, Merrill

Schuldt is left-handed and played his only game with the Golden Knights on that side. He’s a terrific skater with good vision and solid puck-moving skills. His issue, like many young defensemen, is in sorting out rushes. He’ll likely be best with a more defense-first style player like McNabb or Engelland, but it would be interesting to see how he could match with Schmidt.
Best Match: McNabb
Other Options: Engelland, Schmidt, Whitecloud, Merrill, Holden, Bischoff
Avoid: Theodore, Coghlan, Hague

Hague is an offensive weapon when he gets his feet across the blue-line, but his skating is still a question mark against NHL caliber players. He’ll probably be best with a well-rounded player as opposed to a specialist.
Best Match: Schmidt
Other Options: McNabb, Whitecloud, Engelland, Merrill, Bischoff, Holden
Avoid: Theodore, Coghlan, Schuldt

Whitecloud is one of the two in the rookie battle that are right-handed. He’s a well-rounded defenseman who defends with his skating. He’s similar to Schmidt in the way he defends, but looks a bit more like a Merrill when it comes time to go forward. He can do it, but it would be surprising if scoring becomes part of his game.
Best Match: Theodore
Other Options: Schmidt, Hague, McNabb, Merrill, Coghlan, Schuldt
Avoid: Engelland, Bischoff, Holden

Bischoff is the most defensive-minded of the rookies. He’s a solid penalty killer and moves the puck fairly well for a stay-at-home type player. He’d almost certainly be best with a puck-mover and a more offensive-minded player.
Best Match: Theodore
Other Options: Schmidt, Schuldt, Coghlan, Hague
Avoid: Engelland, McNabb, Whitecloud, Merrill, Holden

Coghlan’s best weapon is his shot. He has an absolute cannon. As for the defensive side of his game, that’s still to be seen. He held up fairly well at the AHL level, but things change in the NHL. He stands 6’2″, but he plays a smaller style of game. Definitely want to pair him with a defense-first guy, and probably a player with some physicality too.
Best Match: McNabb
Other Options: Engelland, Holden, Merrill, Schmidt, Whitecloud, Bischoff
Avoid: Theodore, Hague, Schuldt