When the Golden Knights selected Peyton Krebs with their first pick in the 2019 NHL Draft they knew they got something special. The very first time we saw Krebs after becoming a Golden Knight, he showed it.

Just a few days after having his Achilles tendon slit with a hockey skate, Krebs heard his name, stood up, hugged his family, and then walked down the steps of Rogers Arena, onto the stage, and slipped on his Golden Knights sweater as the Golden Knights 1st Round pick.

He’s done nothing but impress ever since.

Krebs managed to recover from that gruesome injury in less than six months, returned to play in the WHL, and as an underaged player nearly cracked the Canadian World Juniors team that went on to win the Gold medal.

He then put up 60 points in 38 games with the Winnipeg Ice before the season was canceled due to COVID. That didn’t stop Krebs though. He joined the Golden Knights for Training Camp ahead of the 2020 Playoffs and was selected to join the team in the bubble.

Next he won a silver medal at World Juniors, which he parlayed into a spot in VGK Training Camp ahead of this season, then a place on the Silver Knights where he tallied five points in five games. Finally, due to a goofy rule, the 20-year-old Krebs was forced to return to the WHL to finish out this season, which is where he recently pulled off what might be his most impressive feat yet.

The captain of the Winnipeg Ice, Krebs is one of two players on the team who was selected in the NHL Draft and he’s the only one to go in the 1st round (the other is a Flyers 6th rounder). It’s no secret he’s the best player on the team, so when the Ice had an emergency situation, they called on Krebs.

Tuesday night the Ice were without four defensemen from their normal lineup. So, they turned to Krebs, the 17th overall selection in the 2019 NHL Draft, a forward, who leads the entire WHL in points, to fill in on the blue line.

That was a little bit different. First time playing D since Atom (under 11 year-olds). It was fun though, I had a good time. I think that was the most nervous I’ve been before a game, I didn’t want to get dipsy-ed between the legs. –Krebs on IceTV Postgame

Krebs may have been nervous internally, but externally, he didn’t show it.

He scored a power play goal, played more than half the game, and set up the game-winning goal in overtime. As a defenseman!

Both of my brothers were D-men… and I also played with Bowen Byram quite a bit so I just wanted to kind of try to do something like him, try to be like him I guess, or that was the goal at least. –Krebs on IceTV Postgame

The win extended the Ice’s point streak to 12 games, which they pushed to 13 on Wednesday in a back-to-back, a game in which Peyton Krebs added four points and was named 1st Star of the Game, also playing as a defenseman.

He reminded me of Bobby Orr out there. –James Patrick, Winnipeg Ice head coach on IceTV Postgame

Anywhere you put him, Peyton Krebs will produce. He’s literally never played in a league or tournament, since the age of 14, where he hasn’t produced at least a point per game. AHL, WHL, World Juniors, Hlinka Gretzky Cup, Alberta Cup, and probably one day the NHL, Krebs scores.

He’ll finish out his season with the Winnipeg Ice and then return to Vegas to really begin his journey with the Golden and/or Silver Knights.

He comes with one more tool in the shed though, one he probably didn’t even know he had, though one the Golden Knights hope they are never in a position to have to see.

Oh, and as if doing all of this as a defenseman wasn’t enough, Krebs played the game with a chin full of stitches after catching a high stick in an earlier game. 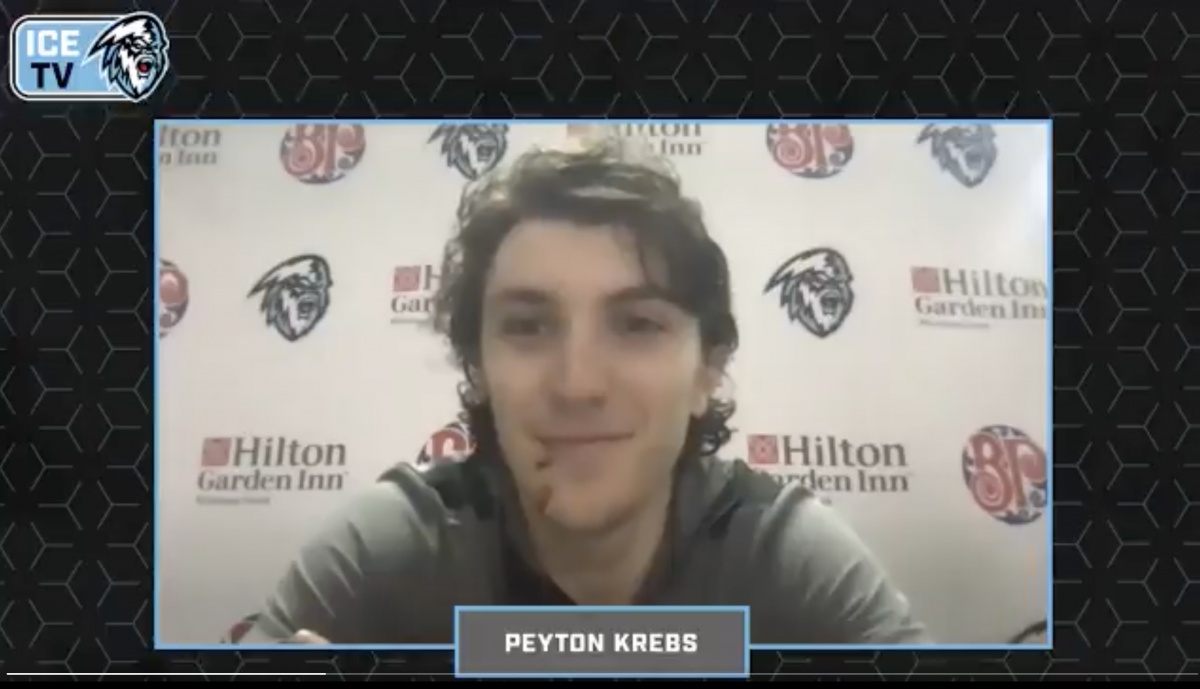 Will Defensive Scoring Continue Into The Postseason