Nearly two hours after the start of the 2019 NHL Draft, Peyton Krebs’ family finally got to let out the massive cheer they’ve been planning for years. 18-year-old Peyton stood up, dolled out some hugs, and then he made the long trek from Section 117 to center stage at Rogers Arena in Vancouver. He hobbled down the arena stairs, limped along the draft floor, and staggered his way up onto the stage to accept his Vegas Golden Knights jersey and hat before taking a picture with his new GM and President of Hockey Operations. 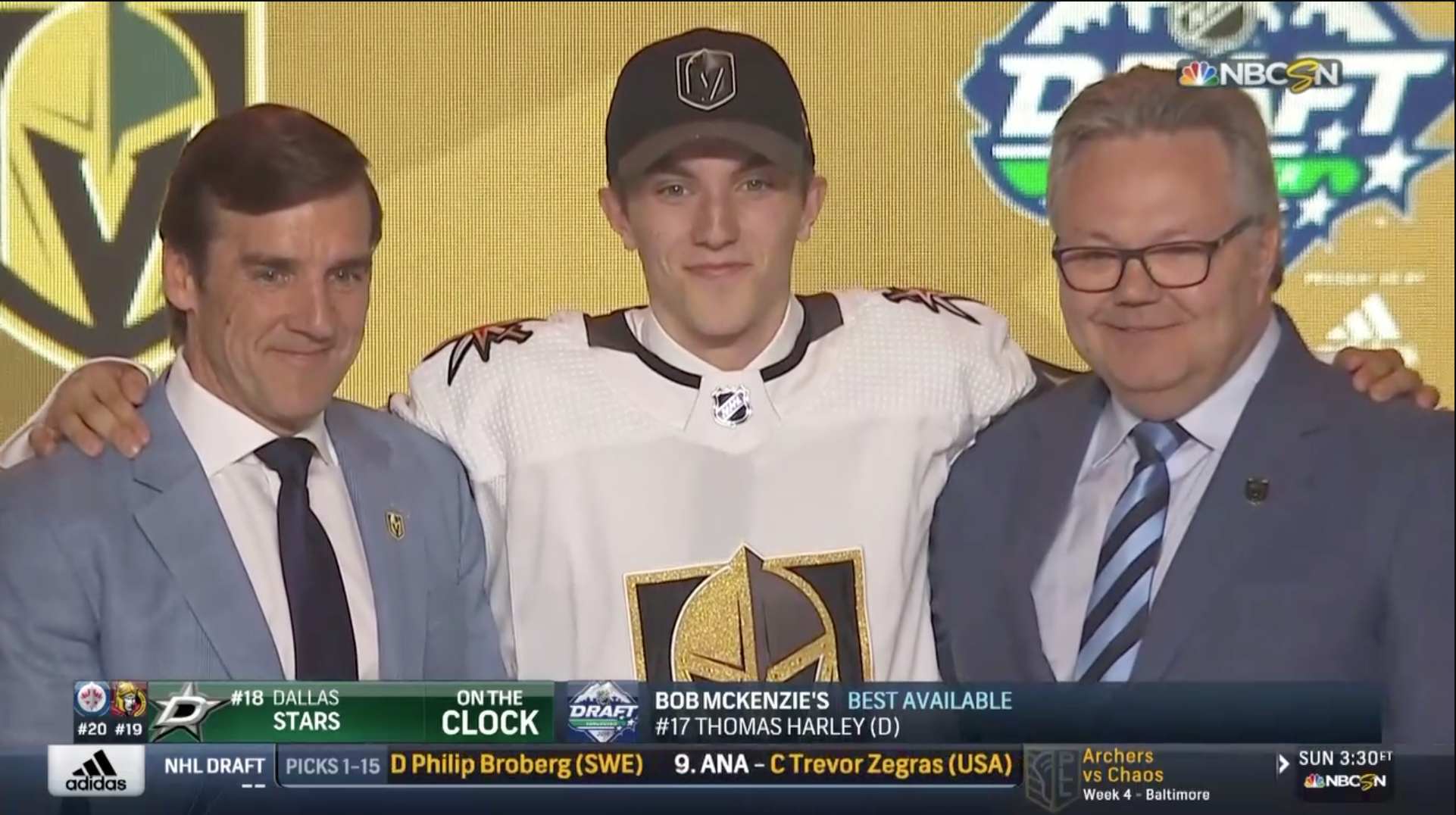 Photo courtesy of NBCSN on NBCSports.com

And he did it all with a giant smile on his face.

17 days ago Peyton Krebs was participating in an on-ice training session when another player’s skate cut through his sock slicing into his Achilles tendon. Three days later Krebs was under the knife having surgery to repair the “partially torn” tendon.

A player who was previously expected to be picked in the top 10, and maybe even the top five, had gone from a high-end NHL prospect to a risky one. All because of a freak accident.

That didn’t stop the Golden Knights though, who made Krebs the fourth 1st round pick in team history and the first since Vegas’ first Entry Draft in 2017. But now, the focus really intensifies on the new prized prospect’s heel.

It’s definitely something (teams) wanted to know about, how it’s healing and everything, but I don’t think it was a huge factor. I think I went where I was supposed to and I’m going to make the most of it. -Krebs

Luckily for Krebs, all Achilles injuries are not alike. Recently, Kevin Durant suffered an Achilles injury during the NBA Finals, ending his postseason and leaving his availability for all of next season in jeopardy. NFL superstar cornerback Richard Sherman ruptured his Achilles in November of 2017 and despite getting back on the field in 2018, most believed he returned a different player. Krebs’ injury is very different.

It’s way better to happen with a cut, or a laceration. If it gets cut clean, that means that the two ends of the tendon prior to the injury were healthy. You would assume the cut was little higher up than the typical tear because the skate protects the lowest part of the tendon, which is normally where people hurt it. -Dr. Caleb Pinegar, Crovetti Orthopaedics and Sports Medicine

That means everything in recovery too.

With Durant or Sherman, we call it an acute on chronic injury where you have someone who has had an unhealthy tendon for a period of time and finally it gives out. With Krebs, who had a skate cut it, his tendon was probably in perfect shape before the injury. If it was fresh and you got right to it, surgery is about as minimal as you can make it.

That’s about as optimistic as you can have. All the numbers that you would read about Achilles return to sport, those are totally different injuries. –Dr. Caleb Pinegar, Crovetti Orthopaedics and Sports Medicine

Krebs told reporters at the Draft that he’s unsure of the timeline for his return. Obviously, Development Camp next week is out of the picture, but Dr. Pinegar doesn’t think Training Camp in September is completely off the table.

When I fix these, if you’ve just operated on it, typical recovery you’re talking two weeks with no weight bearing and then you slowly advance weight bearing from there and you are using a big boot. So if he’s already putting weight on it that means this thing came together really nice. –Dr. Caleb Pinegar, Crovetti Orthopaedics and Sports Medicine

As for the long term, it should have no ill-effects on Krebs’ future as a hockey player.

I don’t have the medical report (on Krebs), but from what I understand and in talking to medical people, this is an injury that will have little to no impact on his future potential and it will heal. It’s just a matter of the time he won’t be on skates. –Craig Button, TSN Director of Scouting

The Golden Knights looked into it, felt comfortable with the injury/recovery timeline, and took the leap of faith making a player who can barely even walk their 1st round pick.

Watching him wheel around on a scooter while wearing his brand new Golden Knights sweater didn’t look pretty on Draft night, but by the time he dons the Vegas jersey again, the injury will be squarely in the rearview mirror.

And that shouldn’t be nearly as far away as we all probably figured.

**Stick tap to Dr. Caleb Pinegar for dropping some much needed medical knowledge on this story. Dr. Pinegar is a physician with Crovetti Orthopaedics & Sports Medicine located in Henderson, NV. Read more about him and the practice here.**