The decision on when to pull the goalie is always a balancing act. Pull him too early and the other team could shoot one into the empty net and kill off the game. Pull him too late and you don’t give your team enough time to operate with the extra skater on the ice.

Against the Blues, the Golden Knights got exactly right, with the sixth skater recording the secondary assist on the game-tying goal within seconds of hopping over the boards.

Sometimes those work out, sometimes they don’t. Tonight, it did. -Bruce Cassidy

William Karlsson drew a penalty with 2:38 left in regulation and the Golden Knights trailing by a goal. Heading to the power play Cassidy could have opted to go directly to goalie pull to give his power play a full two minutes of 6-on-4 action. However, he chose not to.

We were not going to pull him immediately. You want to give your power play a chance. St. Louis’ PK has been just average this year so let’s give them a look early on. They’re also allowed to ice it without any repercussions so you want to be careful there. -Cassidy

Instead, after a discussion with the top players on the team, Cassidy said the decision was made to wait until about 45 seconds into the power play. It was communicated to Logan Thompson and he was ready to come out the moment the time was right.

That time was just short of a minute into the power play. Karlsson skated into the zone, received a pass, and quickly moved it to Alex Pietrangelo for a one-timer. The shot was wide but caromed perfectly to an unmarked Chandler Stephenson on the other side of the goal. Stephenson calmly tucked it into the empty net and the game was tied.

In this particular situation, the extra skater exposed the Blues’ penalty kill system which operates a bit differently than most in the NHL. Most teams utilize a 2-2 system that forms a box around the center of the ice. The Blues use a 1-2-1 in the shape of a diamond around the same area. Here’s how that looks. 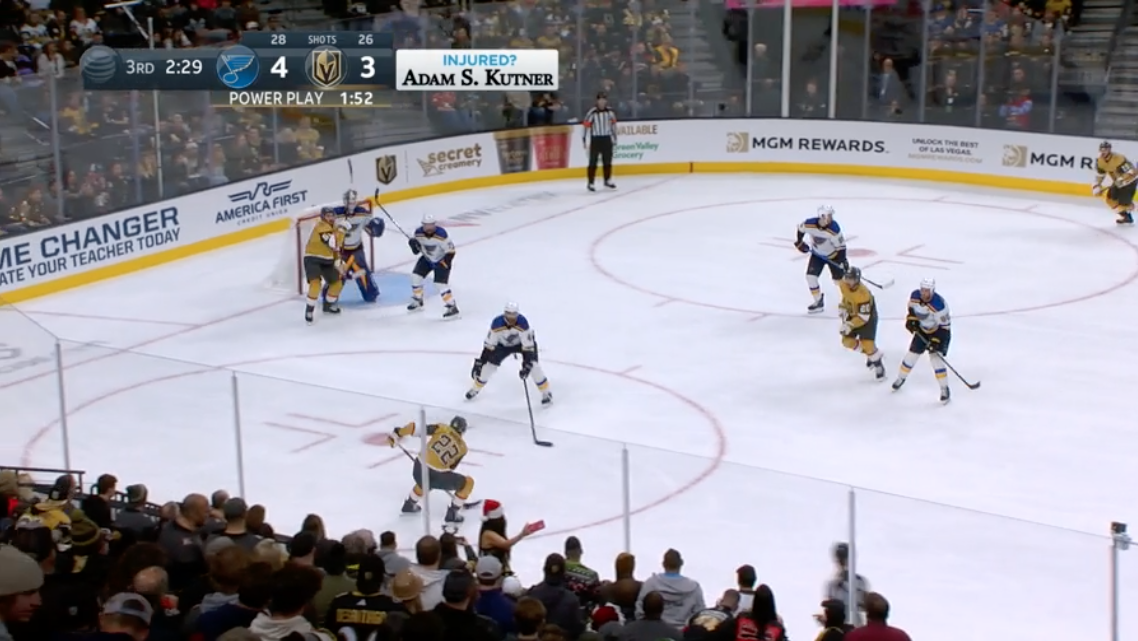 The player furthest from the puck in the “2” of the 1-2-1 is responsible for any player heading toward the goal. As you can see in the photo he is checking over his shoulder to see if that player is headed there.

Vegas eventually works the puck to Pietrangelo for a shot, when they still had five skaters. On that one, everyone is accounted for. It’s when the sixth skater enters the picture that things change.

The Golden Knights get a shot from Pietrangelo in almost the exact same spot on the ice. The Blues have a similar coverage on the play. But, now, with the extra skater, Vegas has a numbers advantage near the goal.

On the first Pietrangelo shot, there is a man marking Mark Stone and the other defenseman has his eyes on Stephenson. On the second one, again a man is marking Stone. The other defenseman has to make a decision on which forward to cover. He takes the one in front of the goal, expecting the shot to head there, and leaves Stephenson on the back door. When the shot banks off the back wall, Stephenson is all alone to bang it in.

Had VGK not had the extra player for this shot, they would not have had a numbers advantage around the goal and therefore there would have been coverage on Stephenson.

By sending on the extra skater while the puck is actively in play, the Blues did not have enough time to alter their defensive shape and it led directly to the game-tying goal.

It’s a wonderful collection of a great coaching decision, excellent timing, and perfect execution. Add it all up, and it meant a very merry extra two points for the Golden Knights heading into the Christmas break.