The San Jose Sharks had to have Game 6 to continue their season. The Golden Knights one the other hand knew that even if they faltered in Game 6, they still had Game 7 at T-Mobile Arena in their back pocket. The Sharks were desperate, they had to have this game, and Vegas simply didn’t give them a chance to take it.

It started in the 1st with Marc-Andre Fleury. He was a brick wall shutting down every great opportunity the Sharks had.

We rely on Flower to make a lot of great saves, he’s a spectacular player. When he’s out there hootin’ and hollerin’ and yellin’ and having fun it really calms our guys down and it gets our group going that much more. -Nate Schmidt to NBCSN

He needed some help from the posts a few times, but all in all, Fleury was able to help the Golden Knights through the tough 1st period on the road and send the game to intermission tied.

That is when Vegas took control of the game and refused to let go until they had fired a puck into an empty net and clinched their spot on the next round. 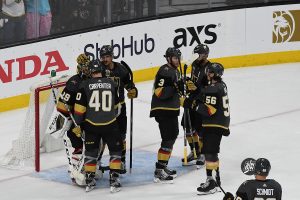 The 2nd period was a four-line, three-pairing display of the brand of hockey that had the Golden Knights one game away from the Western Conference Finals in the first place. They were buzzing on the forecheck, they were flying through the neutral zone, they were breaking out of their own zone with ease using speed and simplicity, and when the chances came to score, they didn’t miss them (even though it seemed like Schmidt did on the game’s second goal). The game stayed at 5-on-5 for the entirety of the period, and Vegas feasted on a Pacific Division foe like they have all season.Then came the all-important close-out period. It’s one thing to get a lead in a game or a series, it’s another to get the lead in a game which can end your opponent’s season, but it’s a completely different animal trying to officially stomp the life out of that season. Coming off the three-goal barrage the Sharks put up late in Game 5, it was to be expected that the Golden Knights were going to have to withstand everything San Jose had in them to hang on to Game 6 and win the series.

Instead, it was the Golden Knights who controlled play for the entire period. In fact, they won in every offensive statistic in a period in which they were supposed to be clinging to a two-goal lead. 16-10 on shot attempts, 14-7 on scoring chances, 6-3 on high danger chances, and most importantly 1-0 on the scoreboard. It was a clinic in how a hockey team should play with a lead.

I think we did a great job of limiting the opportunities in the last two periods, they didn’t have a whole lot of chances, but when they did, we had the guy back there to make the saves. -Schmidt on NBCSN

After giving the Sharks 25 total power plays in the first five games, and at least four in every game, the Golden Knights cleaned it up and committed just two penalties in the game (and one was a questionable call). They were the better team at 5-on-5 all season and most of the series, but they couldn’t keep the game there. Tonight, they did.

It goes down as a 3-0 shutout and the fourth win of a series to reach the halfway point of the ultimate goal, but what it does more than just advance the Golden Knights to the next round is it breeds even more confidence in an already confident team.

There’s nothing this team isn’t capable of, and they know it. Now we wait to see who’s next, and the new obstacles the doubters will say the Golden Knights can’t overcome.

Eight down, eight to go. See you in the Western Conference Finals.