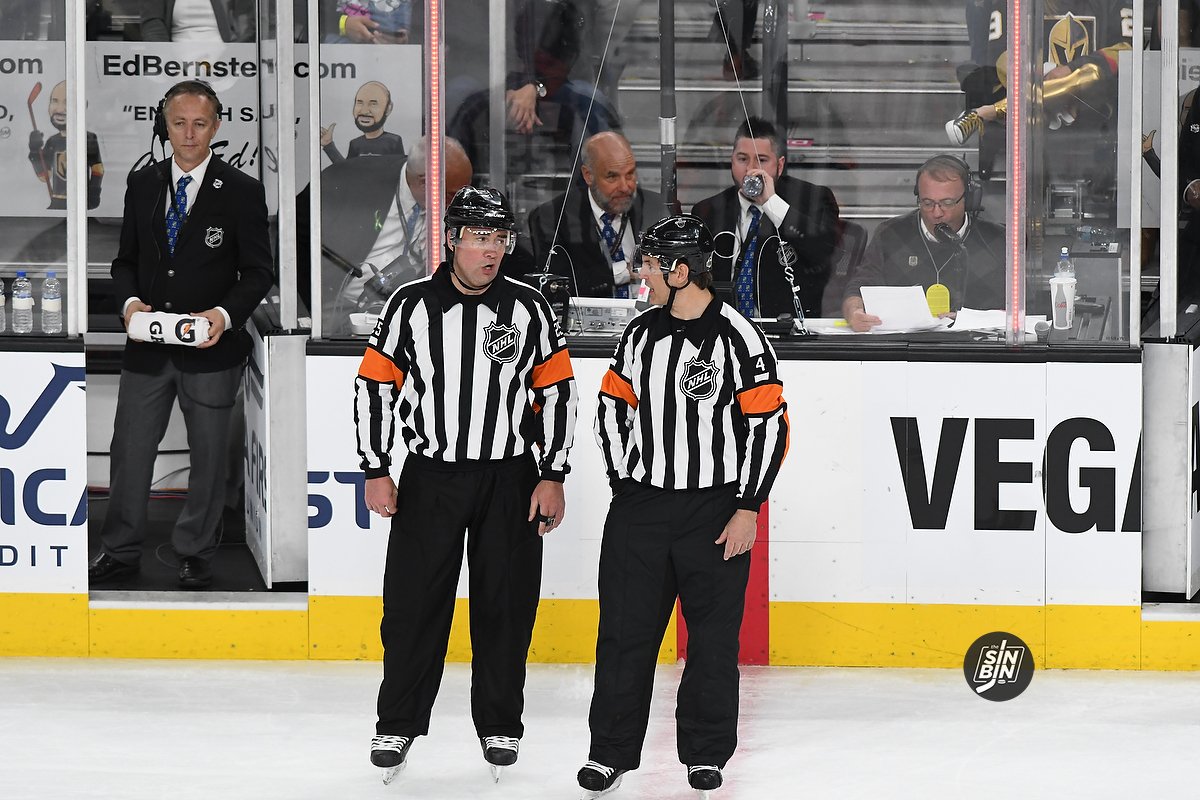 One of the Golden Knights biggest points of emphasis in this series coming was to stay out of the penalty box. In Game 1, Vegas spent 34 minutes in the box. Of course, 20 of those came on misconduct penalties in the final minute, but still 14 minutes, or seven minor penalties, is simply too many against a team like San Jose.

Definitely, they are avoidable. We’ve got to be more disciplined. -Gerard Gallant

With just two 5-on-5 goals scored of the seven total in the game, it was clearly a major part of the outcome of Game 1. So, let’s take a look at each one.

It’s not as much the penalty in this case as it is the shift that led to it. Vegas was hemmed in for about a minute before this puck squirted out to the side and Bellemare’s stick gets caught in the between the legs of the Sharks player.

I just need to be sharper. When I see that the puck goes behind him I have to remove the stick quicker. I was trying to make sure he didn’t have full control of his stick so I put my stick in the way, but my stick ended up between his legs. As soon as he started twisting I realized my stick was in the wrong spot. It’s avoidable. -Pierre-Edouard Bellemare

In a post-play scrum Marchessault ends up getting punched in the face. The call on Marchessault is essentially called as embellishment and it’s absolutely ridiculous. There’s a clear mark on Marchessault’s face from where Dillon landed a left hook and yet somehow Marchessault is given two minutes for being hurt by the punch. This one is plain and simply the referees losing control, and it hurt the Golden Knights badly. This was the beginning of what was soon to become a 3-on-3 and eventually two Sharks goals.

If there’s ever been a good penalty, this is it. Obviously, Vegas cannot let Tomas Hertl loose like this, but the hook from Engelland allows Marc-Andre Fleury to poke the puck clear. This one sent the Sharks on a 4-on-3 power play and continued the biggest swing in the game.

Just can’t have this one. The Golden Knights are in terrific shape defensively with three defensemen (and a backchecking fourth) against just two Sharks. Carrier isn’t expecting the player to cut back, his stick is in the wrong place, and he hauls him down. This type of penalty can’t happen in this series if Vegas wants to win it. This did not lead to a goal, but Vegas had just scored and it took away any chance to go get a second one.

At first glance, it looks a bit soft, but watching it a few times it’s clearly a slash on the hands. The puck is sliding either under the goal or to the corner, in a safe place for Vegas. Holden is working hard to break up a cycle, but he has to do it legally. Again, didn’t lead to a goal, but certainly hindered the Golden Knights’ chances of getting back into the game.

It’s your classic “protect the goalie” penalty on Stastny. While I completely understand why he’s doing this, Vegas must remember that 4-on-4 does not play to their benefit in this series. So, as much as it sucks to watch a player twist and turn all over Fleury, the Golden Knights have to let the referees handle it. A power play in that spot could have aided a comeback.

McNabb just takes out his frustration on this one. In a 4-1 game, it’s understandable but completely avoidable. Hopefully, this got it out of his system.

All in all, as you can see, this isn’t exactly a case of referees missing calls. Sure, they missed a few (on Evander Kane specifically) the other way, but Vegas earned a majority of their time in the box.

Power plays give you momentum. They had a couple there that were good scoring opportunities. We just have to get back to work. -William Carrier

Even in what was about as poorly as the Golden Knights can play at 5-on-5, the score was just 1-1 with all 10 players on the ice.

Stay out of the box, stay in control of the series. That’s about as simple as it gets, and looking back, it should be an achievable goal in Game 2 tomorrow night.