The holdout is over!

At $5.2M per season, Shea Theodore becomes the Golden Knights highest paid defenseman (by far). The 23-year-old gets a big time raise that many believed he earned, including his General Manager.

If you’re going to do a long term deal, and short term deals but certainly long terms, then you have to get the right numbers. Really have to trust your instincts, trust the experience, trust the scouting reports from your pro staff, trust the analytics data, and make a good decision. We rely on all those resources to make a good decision and we think we made one here and time will tell. -George McPhee

Theodore and the team are happy with the deal, and of course the fans are too. But how did the organization fare committing to a seven-year deal? Remember, McPhee didn’t have to offer Theodore anymore than the required qualifying offer (around $1 million). 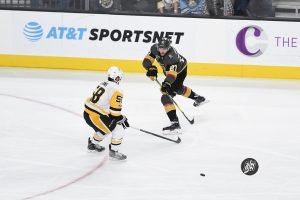 When you peruse through the salaries of today’s NHL defenseman, $5M AAV suggests the player is a top 50 defensemen. Out of 227 signed NHL defensemen, Theodore’s new deal makes him the 45th highest paid defenseman in the league. Here are a few players right around his salary for this season.

As you can see Lindholm and Krug are a big part of each team’s offense. Skjei has less offense, but significantly fewer games played. However, all three are very good defensemen, bordering on elite. Each player signed an early extension but not as long as Theodore’s seven years.

We thought if we paid a little more now and had a contract that was pretty steady throughout its term and we have cost certainty in the future it allows us to manage the cap better… And he is a good young player and we have some unrestricted years and now he can just play. It’s never perfect, we didn’t get everything we wanted, and he didn’t get everything he wanted, but it’s a deal. -McPhee

The Golden Knights are hoping Theodore is vastly underpaid by the time his contract expires in 2024. The concept is simple. Overpay the player for the first few years and underpay him in the final few. Theodore is probably not a $5.2M defenseman in 2018-19, but by 2022-23 (or hopefully much earlier) his value will be closer to $8M or $9M. Thus, pay now to save later. 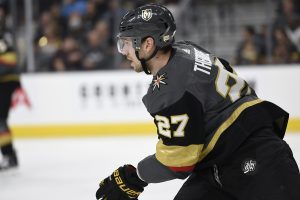 Theodore is younger and has fewer games played than Skjei yet the Golden Knights defenseman has more impact through 100+ games. Like Vegas, the New York Rangers committed to their young defenseman, but for six seasons. Both teams expect to end up saving cap space in the long run.

Like Theodore, Lindholm signed an extension at the age of 23. Two years into the contract, Anaheim is flat out winning the deal. Lindholm is the Ducks best all-around defenseman, earning All-Star and Norris trophy votes. By the time Lindholm’s contract expires in 2022, Anaheim will have saved millions of dollars.

Theodore becomes the fourth highest paid Vegas player. It may look like a lot now, but down the road the seven-year deal will be a hometown discount. Take Sidney Crosby for example. Arguably the NHL’s best player is the twelfth highest paid player. Pittsburgh paid Crosby $8.7M early. It was expensive at the time, but now it looks great, and if he keeps up the production it’s going to be borderline theft in a few years. Connor McDavid’s 8-year/$100M contract may also be a bargain in 2026. It’s all about the early investment.

From the team’s perspective, this contract is a massive win, as long as Theodore remains a high-end player like most expect him to be. As for the player, I’m sure Theodore will be using his fresh paper on a few team dinners because he’s $36 million richer today than he was yesterday. Can’t be mad at that.