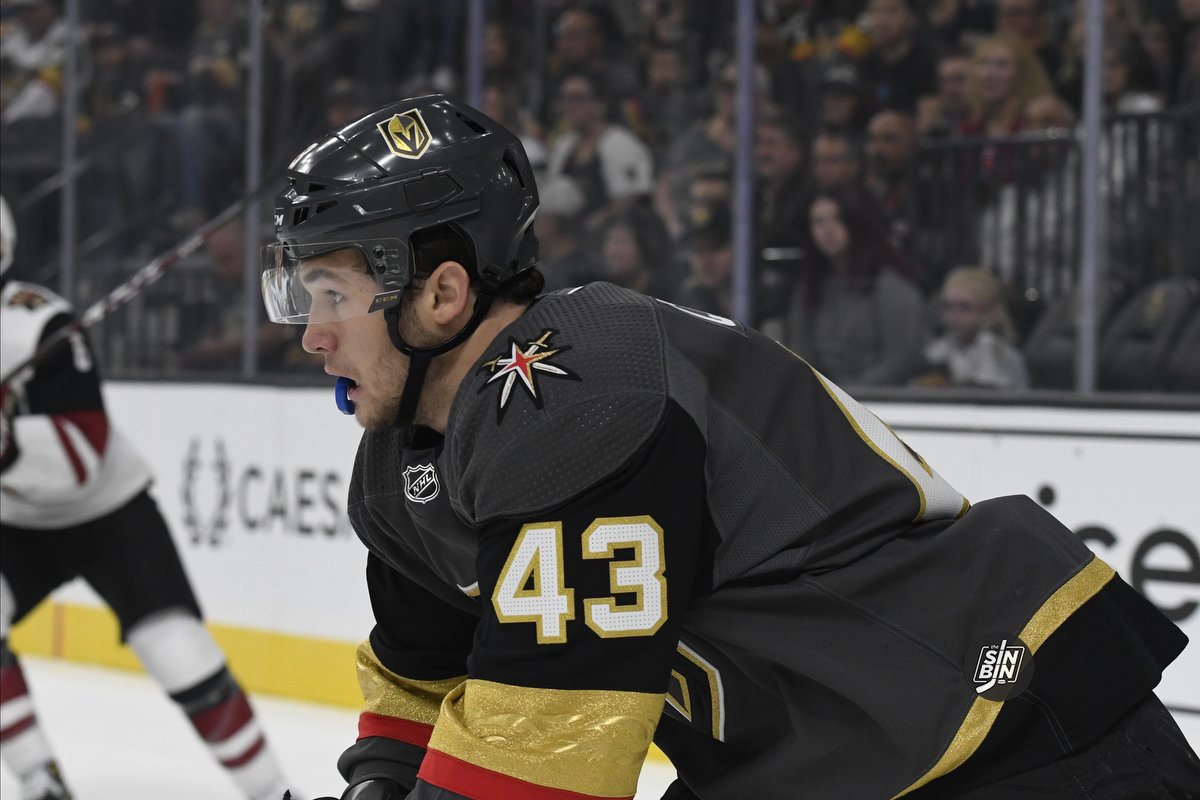 The Golden Knights came into training camp without much uncertainty in the lineup. Sure there are guys who could solidify roles on different lines or pairs, but the 18 skaters expected to be on the ice for Vegas when they head to Los Angeles are pretty set.

That being said, there are a few guys in camp trying to challenge that sentiment, and through just a few days, they are doing it.

The first of those is Paul Cotter. The former 4th round pick saw minimal action in the NHL a year ago, but he made the most of it scoring twice in seven games.

In his first preseason game, he scored again, and drew high praise from the new head coach.

He was our best player. Not because he scored. He had three good looks. The offensive side was really good. He tracked and finished at least three checks, took good angles, and eliminated guys from the play. -Bruce Cassidy

For the first time in his career, Cotter is no long waiver exempt, which makes the decision even more difficult on the Golden Knights. If he can continue to do the things that impress Cassidy, he’ll likely pique the interest of other coaches around the league making him dangerous to place on waivers.

The message to Paul this morning was if you are playing for the Vegas Golden Knights, that’s game one, you’ve got to do that 82 times. The puck found you last night, you did good things with it. The puck may not find you in game two, you’ve still got to do those other things like track, be physical, be in the right spots. So we’ll see where it goes from here but I like his game a lot. -Cassidy

Cotter did not participate in morning skate, but is expected to play in tonight’s game on the third line with Jake Leschyshyn and Jonas Rondbjerg.

The other player making noise early in camp is Sakari Manninen. Arriving from the KHL, the hero of the Finnish National Team has ripped his lethal shot past every goalie they’ve put in front of him.

Plus, in the first power play practice, he participated as a penalty killer and was making life difficult on the likes of Alex Pietrangelo, Jack Eichel, and Phil Kessel.

The 5’7″ (which is probably generous) forward has been playing center in most of the practices and he’s scheduled to start in the middle of the ice in his first preseason game tonight as well. Cassidy said he was relying on the team’s European scouts for that decision. Manninen says he’s very comfortable in both positions.

For the last three or four years I’ve primarily played center. Before that I played a lot of winger, so I feel good playing both. -Manninen

Manninen also worked with the power play units in advance of tonight’s game. Historically he’s operated in the left circle, including where he scored the game-winning goal against Team Canada in the IIHF World Championships, but it appears he’ll work as the bumper with Brendan Brisson and Sheldon Rempal on his wings tonight.

To overtake anyone in the expected Opening Night starting lineup, it’s going to take consistent pressure from guys like Cotter and Manninen. It’s been less than a week, but they are definitely applying it and look to continue tonight.