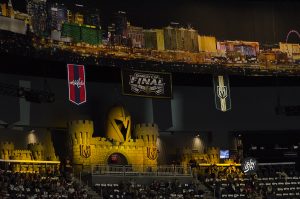 With a 1-0 series lead over the Washington Capitals in the NHL’s Stanley Cup Final, the Vegas Golden Knights are still commanding a pretty penny for tickets at T-Mobile Arena. The Golden Knights, who are poised to become the first expansion team across any American major professional sport to win a league championship, are helping to make the series the most expensive since on the secondary market since TicketIQ.com began tracking data in 2011.

As of Tuesday, the average asking price for a ticket to the Stanley Cup Final was $1,983, more than $400 more than the next highest Stanley Cup Final on the secondary market. The 2014 Los Angeles Kings-New York Rangers cost an average of $1,573, the previous high.

The series continues Wednesday in Las Vegas with Game 2.

The $2,052 average asking price for a ticket at T-Mobile Arena is the fifth most expensive for a Stanley Cup Final since TicketIQ began tracking data in 2011, while the $1,891 to see the Washington Capitals play at home is the sixth priciest.

Fans of SinBin.vegas can get a special discount when buying tickets on TicketIQ.com by entering the referall code SINBIN at checkout.

**TicketIQ.com is an official sponsor of SinBin.vegas**