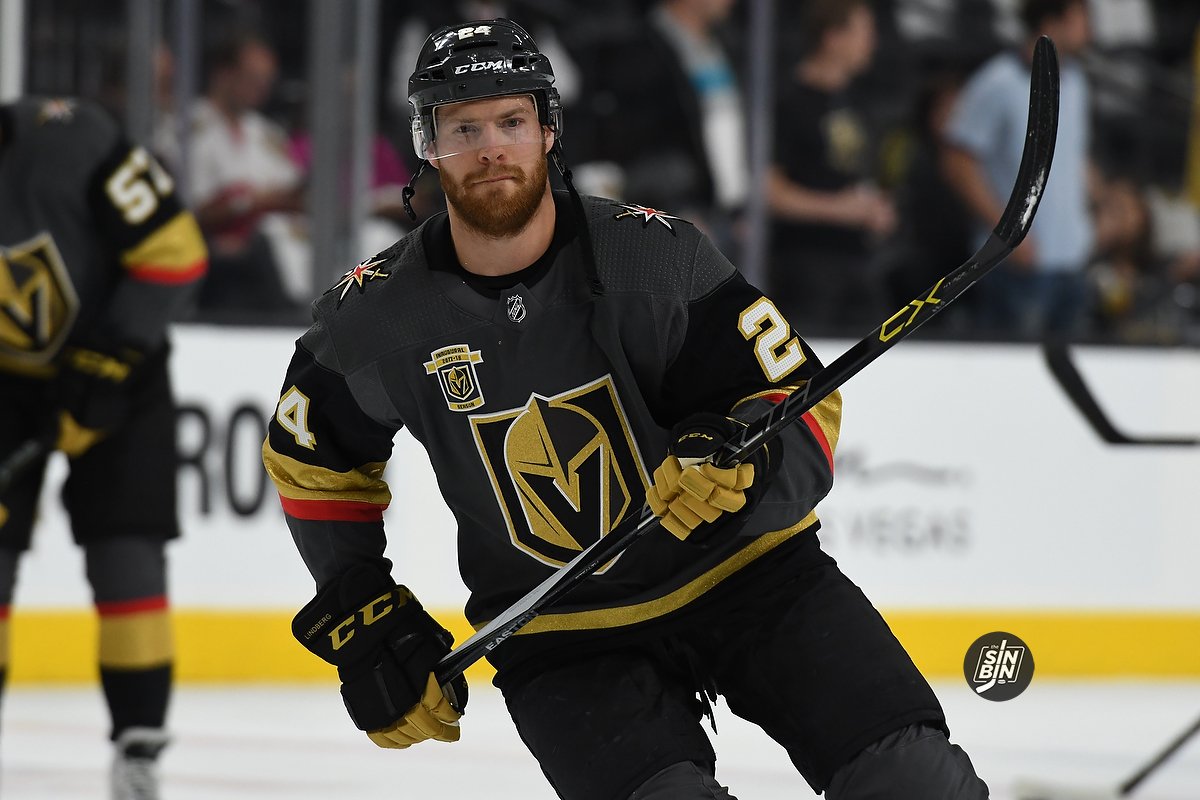 Lindberg has been out of the lineup so much, we don’t even have a picture of him from this season. (Photo Credit: SinBin.vegas Photographer Brandon Andreasen)

Daniel Carr’s demotion to the AHL, Reid Duke’s inability to get into the lineup, the Pacioretty healthy scratch or injured situation, Ryan Reaves’ mysterious absence from the game at MSG, and the major line shuffle that went with it. Plus, the recent decision by Gallant to stop giving out lineup and injury information. All of this can be tracked down to one guy, Oscar Lindberg.

On December 4th Oscar Lindberg was forced into the Golden Knights lineup when Max Pacioretty had to take a game off because he was “not feeling well.” Lindberg was slotted into the top six to play with Alex Tuch and Cody Eakin. In that game, Lindberg recorded his first two points of the season, he was on the ice for 13 scoring chances while allowing just one (according to NaturalStatTrick.com), and by all accounts played a great game.

He played real good. I was real happy for him. He got a chance to play tonight and like I said Pacioretty didn’t play tonight but Oscar stepped in there and did a great job and had a good game and that’s what we want from him so I’m happy for him. -Gerard Gallant in 12/4 postgame press conference

The following morning, Daniel Carr was optioned to the AHL and Reid Duke was recalled. The reason for this move was because with Pacioretty ready to come back into the lineup, either Lindberg, Carr, or someone else had to come out. Gallant chose Carr, which caused McPhee to send him back to the minors to stop the clock on his waiver status.

This is the first of many decisions that have been made because of Lindberg’s stellar play.

On December 6th, Lindberg played well once again, especially when looking at the advanced stats. He did not record a point but scored a goal that was eventually wiped off the board due to a whacky goalie interference review.

Yet again, Lindberg deserved to stay in the lineup. This continued for the next four games, in which Lindberg posted three points. All the while, Reid Duke remained on the Golden Knights roster waiting for his chance to make his NHL debut. That chance never came, as Duke was eventually optioned back to the AHL to make room for Paul Stastny to come off IR.

That’s where things started to get really interesting. With Stastny’s return, Gallant’s decision this time was to pull Lindberg, Nosek, Carpenter, or… Max Pacioretty.

We’ll never know because the Pacioretty scratch/injured saga still leaves questions, but there’s a distinct possibility that Gallant chose Lindberg over Pacioretty based on recent play. Over the five games since Lindberg had re-entered the lineup, he had recorded five points, scored a goal, and had a +1 rating in just over 11 minutes per game. Meanwhile, his past five games, Pacioretty did not score, tallied three assists and a -2 rating, and recorded just one fewer shot (Max 9, Oscar 8) than Lindberg despite playing almost 7 more minutes per game (Max 17:57, Oscar 11:20).

Yes, Pacioretty had been hot prior to this little stretch, and of course the “not feeling well” injury that kept him out of the Capitals game could have come into play, but to think it’s preposterous to believe Lindberg had outperformed Pacioretty and thus deserved a spot in the lineup over him is, well, preposterous.

But either way, whether Max was kept out due to injury or coaches decision, Lindberg played again, and played well again, pushing his point streak to four consecutive games.

Which brings us to yesterday morning. With Pacioretty back in the lineup, Gallant now had to find someone else to remove and this time he chose Ryan Reaves.

Due to the madness that ensued two days prior, Gallant declared that he will no longer comment on injuries and lineups, and so, the question as to why Reaves was not in the lineup on Sunday morning was never answered. Nonetheless, actions speak louder than words, and the actions of the coach showed Lindberg in and Reaves out.

And at this point, what should be to the surprise of none, Lindberg once again played a solid game.

Which brings us to tonight, in Columbus, where the Golden Knights play their fourth and final game of this road trip, a back-to-back against a good opponent.

Will Oscar Lindberg remain in the lineup? Does Reaves get back in? If he does, who’s the next victim of the Lindberg lineup demolition campaign?

We’ll have to wait and see when the Golden Knights take the ice for warm-ups (because there was not a morning skate today), but if I were a gambling man, I’d say Oscar Lindberg will be out there… everyone else, who knows.