Well, can’t say we weren’t prepared for that. Opposing team’s “mascot” skates out, tries to pull the sword from the stone, and can’t do it. Then the Golden Knight appears to pull the sword out, the arena lights up, and the crowd goes wild.

It was exactly what The Creator has been saying it would be for the better part of three years, and the Golden Knights gameday staff did as much as they possibly could with it to make it as not-awful as physically possible. 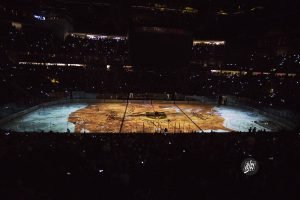 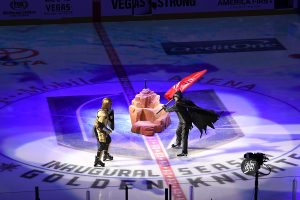 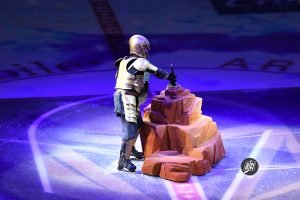 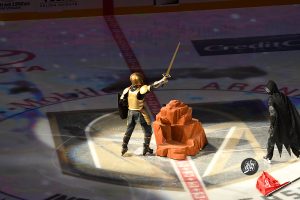 Then, the real shining light appeared…

There seems to be some questions about our mascot, Chance. He. Is. A. Gila. Monster.

The Golden Knights are going to have three mascots, Chance is one of them. The other two are expected to make their first appearances over the next few games, and yes one of them is a Golden Knight.

Chance and the Vegas Golden Knights organization got crushed on social media over choosing a gila monster that looks like the love child of the Fantastic Four rock guy and Barney.

Nonetheless, Chance is exactly what a mascot is supposed to be. How do you think the social media response would have been to the Phillie Phanatic, Orbit, or the Western Kentucky’s Big Red?

It’s supposed to be weird, awkward, and in many ways stupid. Chance is all of them, and there’s even a goofy backstory that goes with him.

Most Gila Monsters live in seclusion their whole lives and have little interaction with the outside world. However, when Chance learned that major professional hockey was coming to Las Vegas he became energized. He emerged from his underground burrow at Red Rock Canyon and made his way to City National Arena in Summerlin to see what all the excitement was about. –VegasGoldenKnights.com

The mascot itself is fine, it’s now up to the guy inside the suit to make him loveable. If there’s a fun personality to go along with the giant lizard wearing a Golden Knights jersey, kids will adore Chance. And that’s the point Twitter seemed to miss last night. Chance isn’t here to make the millennial Twitter trolls happy, he’s here to make kids laugh and have fun at a game.

Chance the Gila Monster is incredibly stupid, which is what makes him incredibly awesome as a mascot.

And before you ask, yes, Gila monsters are native to Southern Nevada.