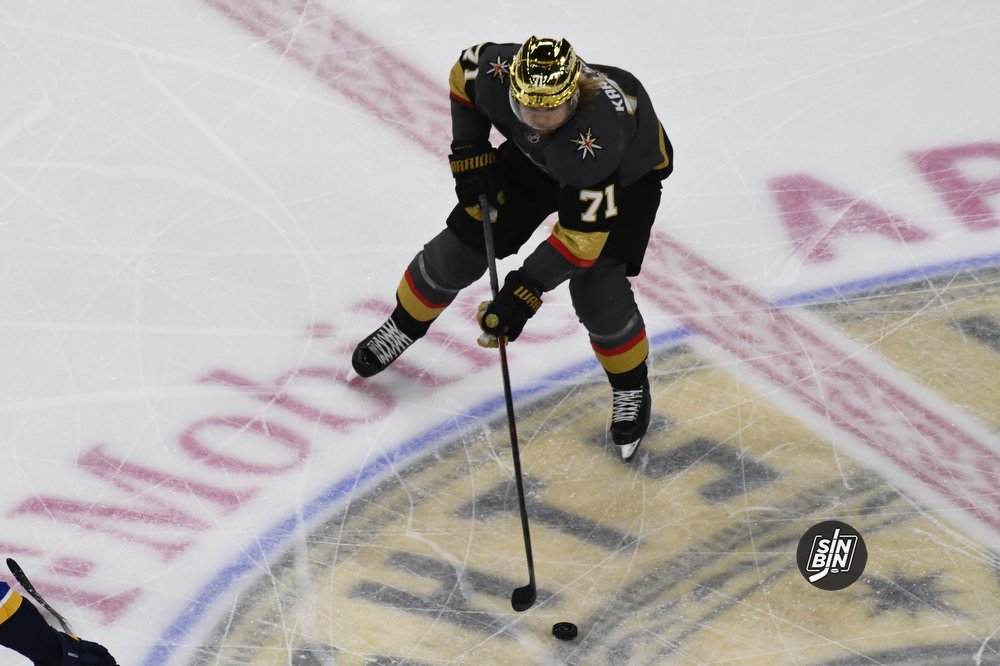 It happened early in the 2nd period, a shift from the Misfit Line of William Karlsson, Reilly Smith, and Jonathan Marchessault matched up with Alex Pietrangelo and Alec Martinez. Playing against the strongest defensive pair and the best shutdown line Montreal can offer, the Golden Knights put together 46 seconds of dominance that encapsulated how Vegas stormed out to a 1-0 series lead and stands as a shining example of exactly what must continue to happen for the Golden Knights to punch their second ticket to the Stanley Cup Final in four years.

After the Golden Knights struggled their way through the 1st, despite getting out to a two-goal lead, they finally started doing what they set out to do in beating the Montreal Canadiens.

In this one shift, the Golden Knights demonstrated a ferocious forecheck, multiple perfect pinches by defensemen, excellent puck support by all five skaters, strength along the boards, and an offensive mindset that put Montreal under so much pressure they were forced to take a penalty.

Here it is. Watch it and focus on how often there are moments where the puck is out of VGK’s possession and how they go about getting it back in several different ways.

It starts with a dump in from the red line by Martinez. While Karlsson wins the race to the puck, he’s hounded by two Canadiens. Karlsson recognizes he’s outnumbered and quickly jabs the puck forward to the open space and a waiting unmarked (for now) Reilly Smith. 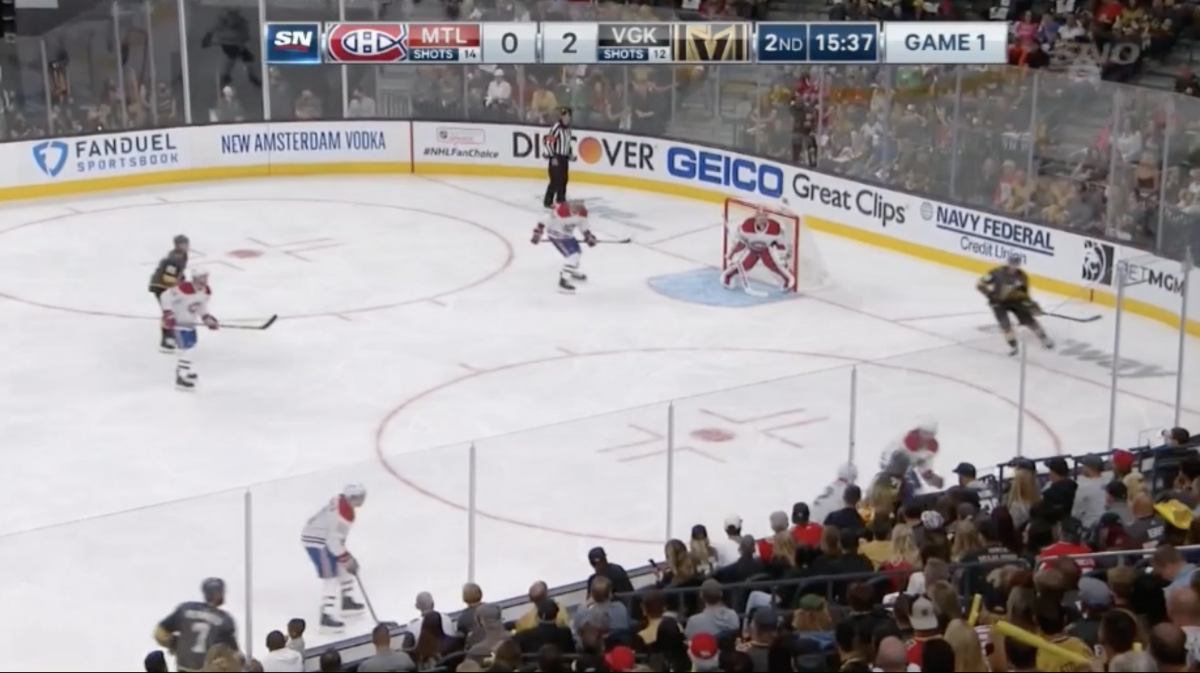 When Smith gets it, he sees the defensemen rushing towards him and moves it around the wall. It’s hard to tell if the pass is directed towards Marchessault under the goal or all the way around to Martinez, but there’s no doubt Smith knows where the defense is lightest and moves the puck that way.

Here’s where we get our first good pinch of the shift. Martinez instantly recognizes that the puck is past Marchessault and look where the puck battle occurs. It’s directly in line with the faceoff dot, or about 30 feet from the blue line. Also, check out where Marchessault has migrated to as he is in perfect position to cover for the pinching defenseman. This marks the 2nd time there is a loose puck Montreal could have possibly collected, but Vegas was quicker and stronger in order to keep it away. 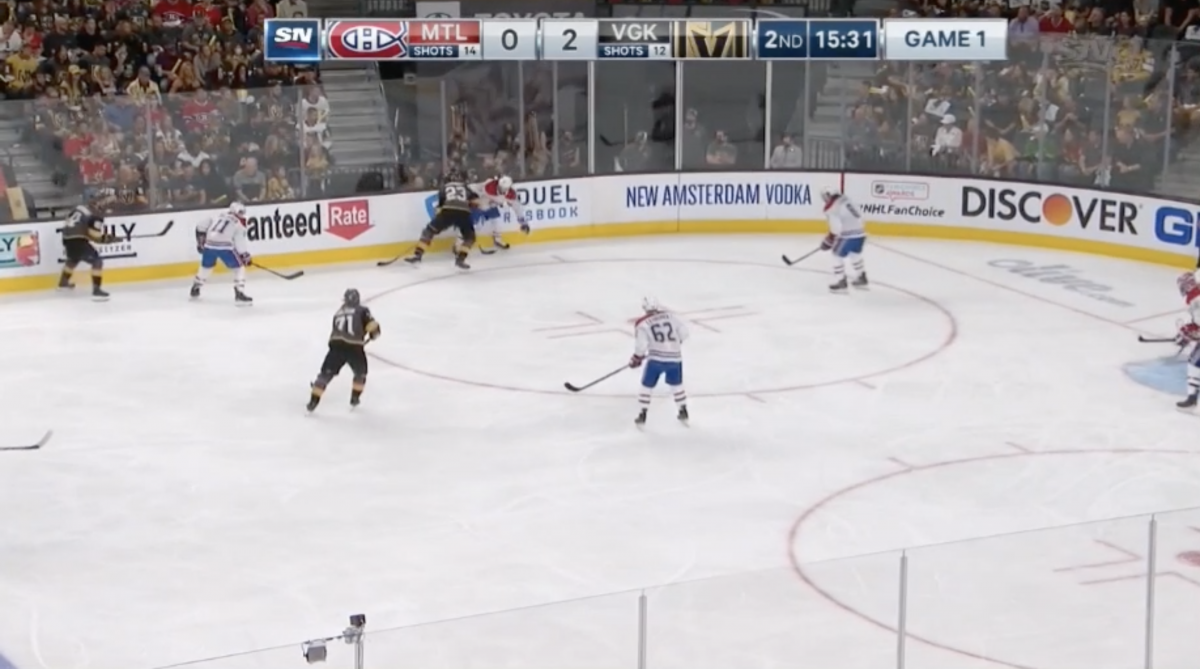 Martinez hacks and whacks at the puck at one point actually taking on two Canadiens and never truly gains control of the puck. This is where puck support comes into play. Karlsson is there to help and he collects the loose puck, the third one of the possession. Marchessault moves off the point to present an option, one Karlsson tries to take, but it’s blocked. So, Karlsson has to go somewhere else, this time it’s so Smith, who is also supporting the play.

As it goes down into the corner, it’s now the fourth time there’s a loose puck. Marchessault is the first on the scene to collect it, continuing a possession that has yet to even set up for any offense at all but has lasted 20 seconds already.

A battle along the wall sees the puck pushed out to the front of the goal where the strong stick of Karlsson gets a piece of it not once but twice to work it to the wall. This is where he have our fifth loose puck of the possession. Montreal actually wins this one, but Smith is supporting Martinez’s point as Alec has jumped in to challenge for the loose puck and the puck is played directly to him. Smith feeds it back in to Karlsson who finally gives the Golden Knights a chance to get a look on the goal.

It’s this little backhand pass by Karlsson that is taking advantage of one of the weakest parts of Montreal’s defense. The pass is headed to Pietrangelo at the far point. Look at all the traffic he must put the puck through to get it there. 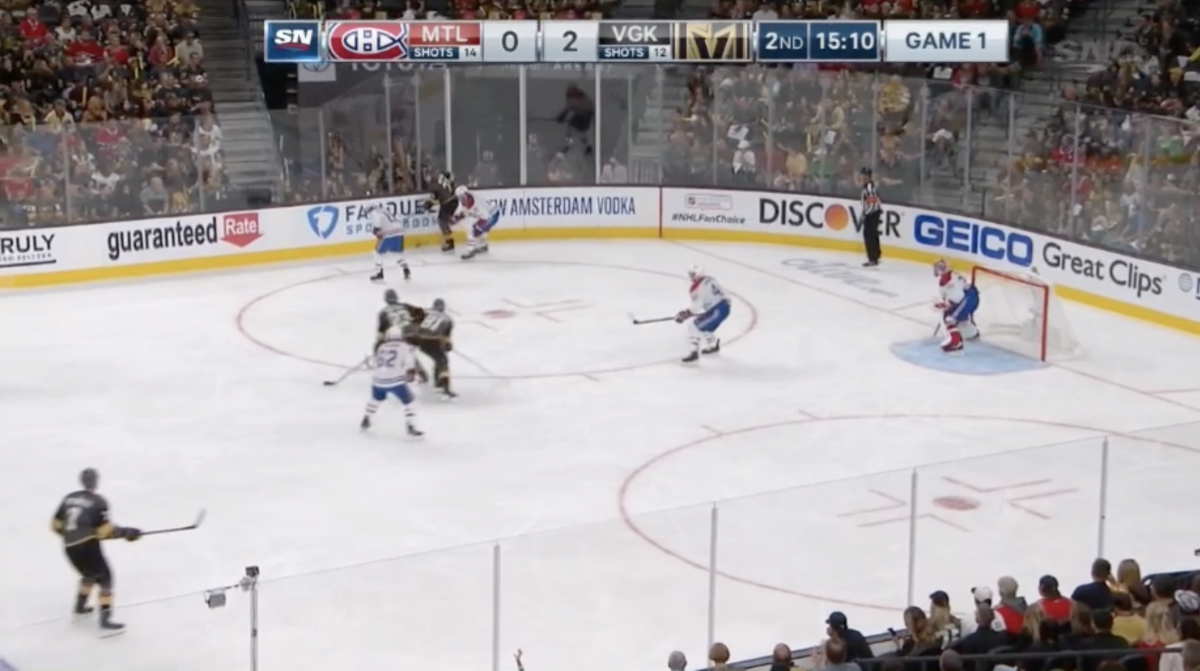 The pass beats both players challenging it, plus the winger charged with covering Pietrangelo, who is headed back towards the middle of the ice to deal with the activated Martinez. Montreal’s biggest deficiency in defending in their own zone is their inability to break up long cross-ice passes. They struggle with positioning of players as well as stick position which allows dangerous long-range passes that stretch them out and put them in precarious positions, as we see here.

Pietrangelo takes no time in putting the puck on net as he sees two Golden Knights creating traffic in front of Carey Price, another hallmark of the way VGK need to play to win this series. The puck is blocked off to the corner where Marchessault is once again the first to this, the sixth, loose puck.

Now, tired from chasing Vegas all over the zone, Joel Edmundsson takes a lazy careless slashing penalty turning the shift for the Golden Knights from good to great.

Marchessault tries a play he and Karlsson have executed 1,000 times in Golden Knights jerseys, skating away from the goal only to whip around and throw it on net for a tip, and it’s just not quite there. Karlsson wins to the seventh loose puck of the shift, gets it to Smith who attempts to hit the extra unguarded attacker heading directly to the goal on the delayed penalty.

This is an absolute masterpiece of a shift by the Golden Knights and it’s one that’s parts were replicated time and time again by this line and others for Vegas throughout the final 40 minutes of Game 1.

Simply put, the Canadiens are not talented enough to handle this kind of pressure consistently from the Golden Knights. If VGK are forechecking, supporting the puck, and winning races and battles to the boards as often as they did in this shift, the Habs will continue to look as helpless as they did in these 46 seconds.

This shift is the epitome of how the Golden Knights want to play this series. It took them 25 minutes to finally get to it, but once they did, they didn’t let up for the remaining 35 and it’s why they have a 1-0 series lead. If they do it again, and again, and again, over the next six or fewer games, Montreal will never have the answers to defending it.