You forget about tonight and get ready for the next game. -Gerard Gallant

That’s exactly what the Golden Knights and their fans should do after last night’s 5-2 loss in Minnesota. There’s really no need to get into the details of the game, we all watched it, it wasn’t the Golden Knights night, something that’s rare with this club.

We were a tired team for the first time this year. -Gallant

Vegas only atempted a total of 24 shots on goal against Minnesota. It’s just the fifth time this season the Golden Knights shot 24 shots or less. Vegas is 2-2-1 in those games. 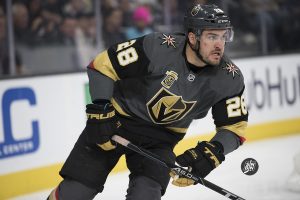 Defenseman Shea Theodore led Vegas with five shots on Wild goaltender Devan Dubynk. Last night was the third time Theodore took five or more shots in a game. The 22-year-old had never registered more than four shots in a game prior to this season.

Golden Knights All-Star winger James Neal had a rare dud of a game in Minnesota. He had zero shot attempts or shots on net. It was only the second time this season Neal didn’t register a shot. Also, Gallant tinkered with his lines and #18 saw a dip in ice time. For only the tenth time in 51 games, Neal skated less than 15:35 of ice time.

Again, none of these nuggets mean much in the grand scheme of things if you throw out the game, but they are certainly something to keep an eye on moving forward. It was a tough, tiring road loss for the Golden Knights. That was supposed to be the norm for this team, luckily it’s not.