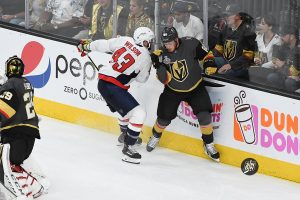 Theodore should remain a major part of the Golden Knights future. He’s a young puck-moving defenseman who skates like the wind and has terrific vision on the ice. He’s got to clean up some of the mistakes in his own end, but the good outweighed the bad all year in 2017-18 and that will only get better as he gets more experienced.

Colin Miller is a weapon offensively. Unfortunately, he’s not always sound on the defensive side of the puck. He’s got the hardest shot on the team, skates better than most of the forwards, and is excellent on the power play. Throughout the course of much of the season, he was paired with Hunt, Merrill, and Luca Sbisa. If he finds the right partner, Miller could be one of the most important defensemen on the team, but that’s yet to happen, and who that partner may be still remains a mystery.

There’s one more thing to consider with these two, trades. Miller and Theodore are the best defensive trade chips the Golden Knights have and at least one would almost certainly have to be involved if there’s a deal for Erik Karlsson.

Whitecloud is the most likely to become a full-time contributor to the NHL team, but if Brannstrom or Hague can dominate Development Camp and Rookie Camp they could completely change the outlook on the blue line. Bischoff is unlikely to make the team, but he’s one to keep an eye on when training camp rolls around after a strong AHL season.

Holm and Leslie were both acquired via trade during the 2017-18 season. There are some rumors of Holm considering leaving North America for the KHL in Russia, but if he doesn’t do that he should be given a real chance to make the team next season. He played against the Golden Knights for Vancouver and was acquired a few days later. In other words, Vegas must have liked what they saw.

Leslie remains an unknown as he went straight to the AHL and didn’t make a ton of noise while there. However, McPhee doesn’t make moves for no reason. He must have seen something at some point to go out and acquire this player. Odds are it wasn’t for the 2018-19 roster though. 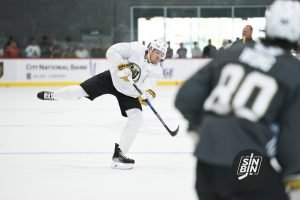 Finally, there’s Reinhart. As always with him, the talent is there, he was a top five pick in the NHL Draft. However, he’s just never panned out anywhere he’s gone, including in Vegas. He made the roster but never played in a game and it always seemed like they were just biding their time to try and slip him through waivers. However, the risk to hang on to Reinhart and play the waiver game to get him to the AHL proves the Golden Knights did not want to lose the player. Maybe 24-years-old is when it all clicks for Reinhart.

All in all, the Golden Knights need to find at least one more permanent starter. One of the guys from the wildcard group would be the best (and cheapest) option, but are unlikely. So, yes, they will likely have to go the free agent or trade route. Whether that means Erik Karlsson, John Carlson, or Mike Green, who knows?