Not Ready To Reminisce, Not Yet At Least

The Vegas Golden Knights are headed to the Stanley Cup Playoffs.

Those are the words I wrote in a tweet on Monday night as the clock ticked down towards zero. Against all odds, those words were about to become a reality in the very first year in Golden Knight history.

I remember when Vegas Wants Hockey was an idea that was laughable to most of North America. I remember the launching of the ticket drive and Gary Bettman standing in front of the media with a sheepish “how the heck is this actually happening” look on his face. I remember the number reaching 10,000 and all you could hear were haters crowing about how Winnipeg did it faster, and I remember the owners’ meetings afterward where the word “expansion” was not even on the agenda. Then I remember when it was.

I really remember June 22, 2016, November 22nd, 2016, and June 21st, 2017. I even remember the little things like the day The Creator’s final payment cleared and the team was officially a member of the NHL, seeing Bill Daly hold up a card with the Golden Knights logo on it during the lottery, the signings of Reid Duke, Vadim Shipachyov, and Tomas Hyka before the Expansion Draft even occurred, and hearing the words “Vegas is on the clock.” 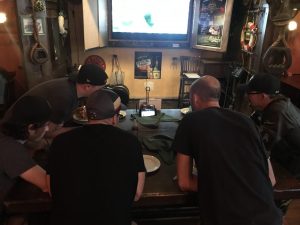 I remember Development Camp, informal practices, and the time I had to watch the first period of the first preseason game on an iPhone because DirecTV couldn’t figure out that ATT SportsNet Rocky Mountain was now a local channel to Vegas.

But through it all, every memory of the building of this franchise, there’s been a re-occurring dream that refuses to leave my brain. Literally every single time something significant happened/happens with this organization, my mind springs forward to the parade down Las Vegas Boulevard. It’s the only thing that really matters to me. Even on October 10th when the whole night was dedicated to victims and first responders of the worst tragedy in Las Vegas history, I kept thinking how amazing it’s going to be for those people to have their own float in the parade.

That’s why when the Golden Knights clinched the playoffs I wasn’t ready to reminisce. I saw your tweets, Facebook posts, and this unbelievable comment on our YouTube video. I know as well as anyone what clinching the playoffs in the first year means to the city, but I didn’t shed a tear, I didn’t feel nostalgic, I honestly didn’t even care all that much because it’s just another step along path of getting to the only place I really want to be, standing on the side of the road with hundreds of thousands of Las Vegans celebrating together.

I completely get why people got a bit emotional seeing the word “clinched” on the big screen at T-Mobile, but all it did for me is bring up another really vivid episode of that same dream. I’m not ready for this to end. I’m not ready for dates of the newspapers in the dream to change from 2018 back to 2023.

I’m not going to truly celebrate clinching the playoffs because I don’t believe it’ll be even close to the most amazing thing this team does this year. Feel free to shed your tears of recollection now, but mine are waiting until I look around and I’m standing in the middle of the dream, for real.