Not Going To Be Pretty, But That’s The Blueprint To VGK Success

46 shots against, five penalties, and 0 for 7 on the power play… on the road, against a team that will likely be contending for a Stanley Cup this season. That’s not how you normally go about winning an NHL game, but that’s exactly what the Golden Knights did, and it’s something Golden Knights fans should probably get used to. 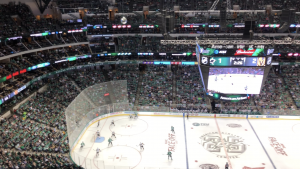 No no no, I’m not saying this team is going to shock the world, make the playoffs, and win the “Cup in One.” What I’m saying is that if the Golden Knights want to be a competitive team night in and night out, sometimes it’s going to take individual efforts like tonight.

I don’t want to be giving up 40 some shots. I thought we competed and battled hard and Fleury stole that hockey game. -Gallant

Other times it’s going to take a bit of luck and good fortune.

Let’s hope not. But some games will go that way. –Reilly Smith

But often it’s going to be ugly. Quite frankly, Vegas isn’t going to have the best players on the ice in most games. If they are going to stay in games, and even steal some like they did tonight, it’s going to take a bit of magic, or as hockey players call it, a bunch of cliches.

There’s really no reason Vegas should have won that hockey game. Fleury was under siege much of the game, the Golden Knights were not particularly good on the penalty kill and they were miserable on the power play, and even when it came to physicality they weren’t exactly the aggressors.

But when you take a look up on the scoreboard, it says Vegas 2 Dallas 1. The blueprint was just set. Who knows how many games the Golden Knights will win in 2017-18? Their general manager spent much of the last two days making moves with an eye towards 2023 rather than 2017.

Yet the Golden Knights won.

Anytime we get a W, I’ll take it. -Gallant

He’s right, Vegas won tonight, but even if they didn’t, that was an effort any Vegas Golden Knights fan can be proud of in a year where realistically finishing 31st is much more likely than finishing 1st. That’s exactly what they’ll have to deliver all year to keep locals from selling their tickets, and truly form a relationship with their own city that’ll turn into something really special when this team truly is really ready to win.

Welcome To The Regular Season Where Hitting Is Actually Allowed