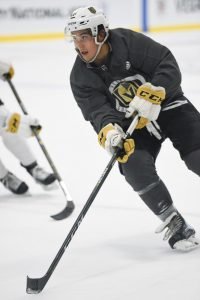 Tyler Wong on the ice at the first day of training camp with the Golden Knights. (Photo Credit: SinBin.vegas Photographer Brandon Andreasen)

Before the rookie games in El Segundo I gave you Tomas Hyka. Two minutes into both games, Hyka scored goals for the Golden Knights. Now, before the first preseason game in team history, I present you with Tyler Wong.

The 5’9″ 21-year-old from the Lethbridge Hurricanes, who spent time in the Toronto Maple Leafs organization last year, is set to make his first-ever appearance in an NHL preseason game with the Golden Knights, and he’s pumped.

(This game) is huge. The way I’ve been approaching this camp is every time I get out there I take it as it might be the last time I’m out there. So I want to make a good impression. Everyone has their spots to fill, so I’m going to go out there and play it like it might be my last one. -Tyler Wong

Wong really impressed the Golden Knights during rookie camp and was all over the place in the pair of games in El Segundo. Then real camp got underway, and he’s even been more eye-catching, particularly his speed.

He’s been terrific. You notice him every time he’s on the ice. He works his tail off and he’ll do whatever it takes to score, and we’re happy with that signing as well. -McPhee

There’s one issue though, he’s not technically signed to the Golden Knights. Wong signed a contract with the Chicago Wolves for the 2017-18 season, so any team has the ability to swoop in and sign him to an NHL contract thus stealing him away from Chicago, and in turn, the Golden Knights.

Obviously, there’s a lot of experienced veterans, but you can’t let that get in your head. I’ve always been kind of an underdog so even to get to this point has been something I’ve had to work for. So coming in here on whatever contract I’m on I just wanted to give it my best and hopefully, I show enough to warrant more time up for the big club. -Wong

Wong scored one of the nastiest goals of training camp on a breakaway, and his speed is undeniable even playing with NHL vets. One Golden Knights staffer told me he’s even more competitive than he is fast too. 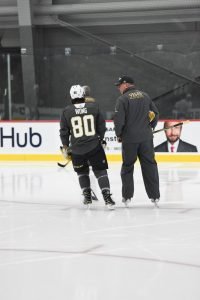 I think my biggest attribute is that I don’t back down and I’ll never quit. That’s been my mentality for as long as I can remember. I may not be the biggest, strongest, or fastest, but I’ll get outworked or out-battled. -Wong

The Golden Knights are only bringing 12 forwards on the trip to Vancouver, so he’s sure to get plenty of time on the ice.

This will be my first preseason game. I have no idea what to expect.  I think the first couple shifts I’ll be a bit nervous. -Wong

I’m nervous too. Nervous he’ll be on another roster by the end of the night tomorrow. Have a feeling that contract situation may change soon though.