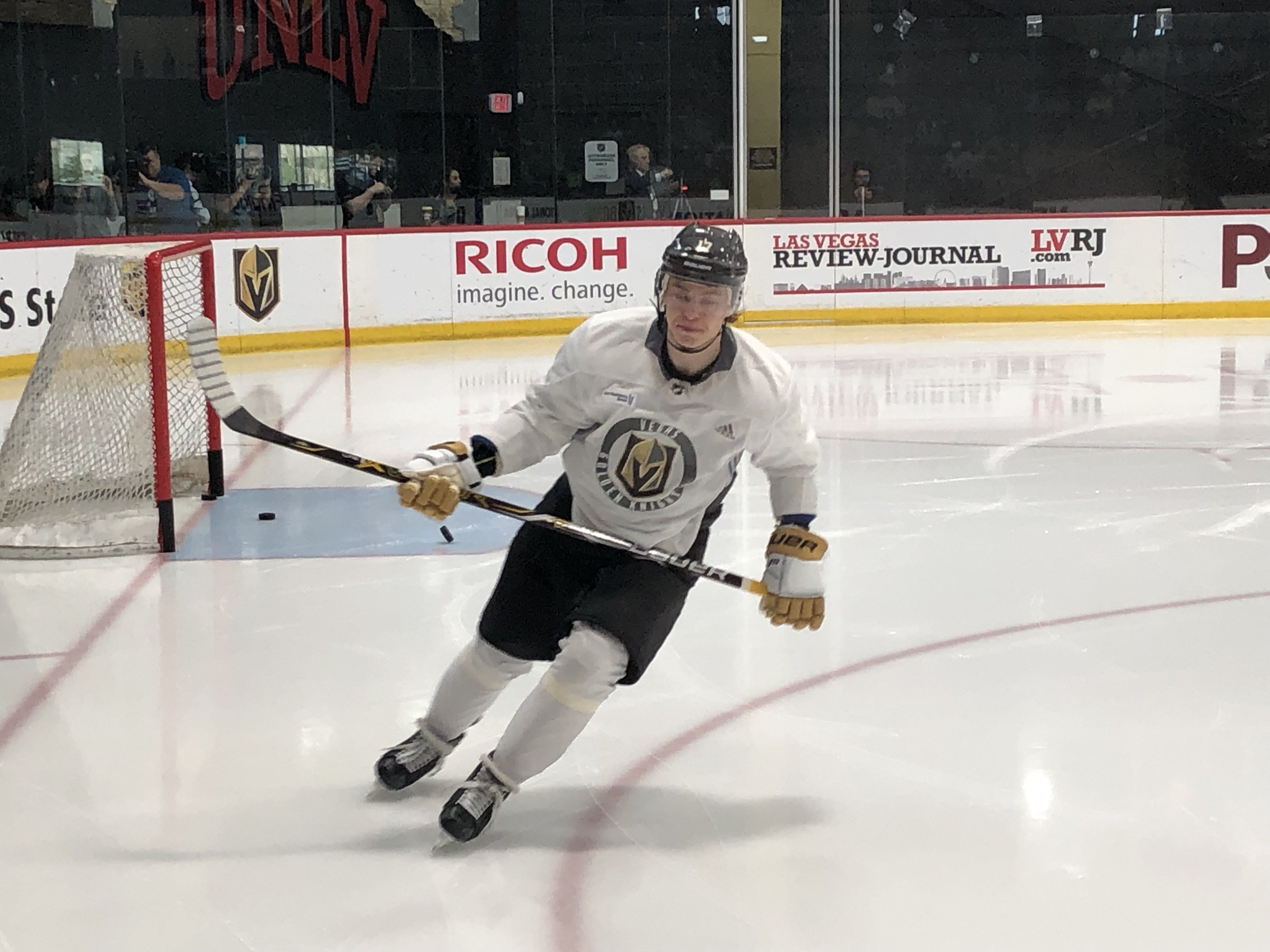 As of this moment, Nikita Gusev is a restricted free agent under Golden Knights control. He’s also currently shredding the IIHF World Championships with his linemate, and best friend (more on that later), Nikita Kucherov.

From his next contract, to how he liked Vegas, to his connection to Vadim Shipachyov, the list of questions surrounding the newest Golden Knight are endless. Luckily, a pair of Russian reporters had an extended sit down with Gusev where they pretty much ran the gamut.

(The article was written by Igor Eronko and Alexey Shevchenko for Sports-Express.ru. It can be found in its entirety here. We have used all of our resources to translate it as accurately as possible, but be aware that nuance is often lost in translation.)

ES.ru: You have burnt a year of your contract, do you already have any offers from Vegas for next season?

Gusev: I’m waiting and expecting an offer from them. I liked it there: good guys, good team. And the city. I don’t know who would not like it, the city is really good. And the atmosphere at the stadium, I think, is one of the best, as everyone says.

ES.ru: Vadim Shipachyov did not like the smoky hotels, casinos, and lobbies.

Gusev: In fact, there are many places like this. But if you play in Vegas, you’ll be renting a house or an apartment instead of living in the casinos. Yes, sometimes you have to pass by, but I don’t think very often. I didn’t sit where it was smoky.

ES.ru: Vadim never gambled in the casino, did you?

Gusev: Yes, I played one time.

Gusev: Yes. I will not say that I played for big money though. I went there with roughly 100 dollars with me. I won a bit and enjoyed it but I never planned to continue.

ES.ru: A lot of people were concerned when head coach Gerard Gallant said, “I don’t know any Gusev. Let him come, but nobody guarantees him anything.” Didn’t that bother you?

Gusev: No, of course not. I went there and knew what was waiting for me. That’s why I didn’t see any problems. I understood. I was going to the NHL and had to prove my place on the ice. It so happened that I did not play. So, next season.

ES.ru: Did you talk to Gallant himself?

Gusev: No. He never spoke to me. I only talked to the general manager, George McPhee. I didn’t talk to my coach before I got there. He had a lot of work to do, with the playoffs and such.

ES.ru: Shipachyov was given freedom during training (practice), but as soon as the games began they said that some things were prohibited to do. Are you afraid of the same?

Gusev: When I signed the contract and could play for Vegas the coach showed me the tactics during a class. And I realized that I would feel good about it. Everything was explained to me in a similar way. There will be no problems.

ES.ru: Vegas is a team with almost the largest amount of movement (other possible translation: speed or quickness) in the NHL. Do you like running without a puck?

Gusev: I’m not going to tell you all the secrets of Vegas. Maybe I’m not the fastest player, but there are other guys out there too that aren’t that quick. What I saw is that many hockey players act very cleverly.

Gusev: Everyone has their own lives. I do not know what and how it will work, but I think that I am able to perform what the coaches want. If they tell me something definite to do, I’ll do it. At the same time, I’m going to continue to play the way I play.

ES.ru: What do you think of Stone, Smith, and the other NHL players? Nothing special, right?

Gusev: This is the wrong question. Those guys are very good, but I understand that it is easy to play with them, everything will be well in this regard.

ES.ru: Can Vegas trade you?

Gusev: I’m expecting an offer from them first. And then we will see what happens. In principle, there could be other offers, but I think it would be wrong to accept one of them because Vegas helped me. I want to reciprocate. In the NHL the rules say that first I have to get an offer from the club which has the rights to me, which is Vegas. I am a rule follower so I will wait for it. I perfectly understand what I want and what I need.

ES.ru: If Vegas offers $4 million, will you accept?

Gusev: Are you asking if I know what they are going to offer?

ES.ru: Do you at least have an idea of what the offer will be?

Gusev: Let’s all see the offer together. Whatever it is, everyone will know at once. The only thing I know for myself – I want to play there.

ES.ru: Have you met anyone on the team?

Gusev: Yes, Erik Haula. He didn’t play, he had a serious injury. We talked a lot: we trained together, sat together in the stands. He speaks English very well. It was easier for me to communicate with him than with Canadians or Americans. They speak too fast. Often swallow their words. He was very supportive.

ES.ru: Have you met the owner?

Gusev: Yes. There is a room in the arena near the locker rooms where you can have breakfast and lunch. He’s often there, talking to the guys. This is perfectly normal.

ES.ru: Vegas has a thing where when you come to the training facility you can give them your keys and they will wash your car, have you taken advantage of this?

Gusev: No, I had a rental car. It didn’t make sense to get that washed. Plus, I lived right across the street at a hotel. It was an easy walk to practice. I’d wake up, walk to practice, and walk back.

ES.ru: Has anyone asked for your autograph or to take pictures with you?

Gusev: Every practice there are 300-400 people to there, it’s always packed. When I came without a car on the first day, all these 300 people were waiting for me at the exit, so I had to sign and take pictures. One person was already in my jersey with number 17 on the first day. I was a little surprised. Actually, very surprised. (laughs).

Gusev: To be honest I didn’t even ask about it. They just added the number to the roster when I came. I really didn’t care what number I have.

ES.ru: At your first practice, when you stepped on the ice, there was an incredible applause.

Gusev: Yeah, that was nice, but when I got out there with the new uniform and pads on the only thing I was thinking was don’t fall around the first corner. I had my skates but everything else was new. But I warmed up fast and everything was fine.

ES.ru: After you came to Vegas, were there moments where you doubted yourself?

Gusev: I don’t know. I wasn’t there that long, two or three weeks this time. I didn’t feel that way. Yes, there are many differences. The rink is smaller, but you have more chances on it. You can do more for yourself and your teammates in just one move.

ES.ru: How do you like the atmosphere in Vegas? It’s different from the rest of the NHL.

Gusev: Before the game I’d be in the gym with all of the other guys who were not playing. So I didn’t get to see anything until the hockey started. I saw the pre-show on the TV though. Then during the games I would sit in the stands. At first nobody knew me, I was interested in watching from there. You can’t fully see and understand what each player is doing when you sit in the press box where the other players sit.

ES.ru: Where did you live in Vegas?

Gusev: Right near the training rink, the hotel is called Red Rock. I lived there with my family. I was comfortable – three minutes walk to the training arena. I went to the games by car. 20-22 minutes. Everything is close and convenient.

Gusev: Yes. Nice city, warm. My daughter was also comfortable. There are places to go, walk. Everything is good.

ES.ru: Didn’t she say she liked living in Khanty-Mansiysk (in the northeast corner of Russia)?

Gusev: I tell her, “plus 30 degrees” (86° F) in Vegas and “minus 54 degrees” (-65° F) in Khanty-Mansiysk, these are two very different things. But I don’t see anything in Vegas that I don’t like. There are shops on every corner, lots of restaurants. You can rent a house or an apartment. And the prices are not really high compared to the rest of America.

ES.ru: Will you consider the climate as one of the factors for your club choice?

Gusev: No. In the first year of the NHL, I just want to play as much as possible, no matter what team. I would like to go Vegas at the moment, see what he will offer, and start from there. Right now I don’t want to answer for them or for myself until I discuss all the details.

Gusev: I’m supposed to get a one-way contract. I want and expect to play in the NHL. If they offer me to go to AHL, I will go, if I am not seen in the first team. It’s not hard for me to endure. In Russia, I went to the VHL in Tver, and it’s okay – I survived.

ES.ru: Shipachyov had problems over there, is he not on your mind at all?

Gusev: You know, the journalists are more friendly in America.

Gusev: I agree, it’s with all people; when a person smiles all the time, you are more inclined towards him.

Huge stick tap to Sport-Express.ru for conducting this interview. There is more including his connection to Tampa, Nikita Kucherov, and the World Championships in the interview, we recommend you check it out.