I remember hearing all the negative comments about Golden Knights defenseman Nick Holden’s play the first month of the season.

He turned the puck over. He was out of position. He added nothing to the offense. And a lot of it was true.

But I also knew that it takes players time to adjust to a new team, a new system and living in a new city. Playing in a different division and conference also factor into the break-in period.

So I was preaching patience. But I’ll admit, my patience with the 31-year-old Holden was being tested. Here was an NHL veteran who was in his eighth season. I was expecting better. Not a whole lot better, mind you, but better than what I was witnessing.

The last few weeks, Holden has restored my faith in the free-agent signing George McPhee made on July 1. He has ramped up his play considerably and he has found a home on the third defensive pairing with Colin Miller.

I’m definitely comfortable. Any time you come to a new situation, you’re going to go through some adjustments. -Nick Holden

The biggest adjustments are learning the idiosyncrasies of your teammates, finding your role and comfort zone with your personality in the locker room and understanding what your coach wants and assimilating yourself in the team’s system and style of play.

When Nate Schmidt was serving his 20-game suspension, Holden was playing with several different partners. It was a difficult adjustment. Little things like which side of the ice you’re playing (Holden’s a left-handed shot), to knowing the speed of the forwards to headman the puck to them to simply having a feel for how the puck is passed to you can all contribute to a player’s comfort (or discomfort) level. 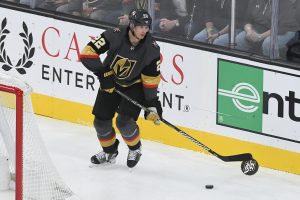 But if you look at Holden’s play the past couple of weeks, you’re seeing the player McPhee thought he was getting.

He’s reading the play better. He’s making smarter decisions when to jump into the attack and support the play. He’s picking up the opposing forwards better in his own zone and using his stick better to get into passing lanes and clear rebounds from in front of the net.

There’s no doubt Schmidt’s return has impacted Holden. But you can say that about the entire Golden Knights team. Look at the way they’ve played since Nate came back Nov. 18. They’re 5-1-0 with Schmidt on the ice. They’re above .500 at 13-12-1, just two points out of first place in the Pacific Division. And if the playoffs began today, Vegas would be in.

Gerard Gallant has settled on his D pairs. Schmidt is back playing with Brayden McNabb, which I expected to be the case. Shea Theodore remains with Deryk Engelland and both were outstanding Tuesday in the Knights’ 8-3 win over Chicago. And Holden and Miller appear to have some chemistry working together though they struggled at times against the Blackhawks.

Millsy is easy to play with. I think our games complement each other’s. -Holden

Gallant said he has liked what Holden has done all year.

I think he has been comfortable from Day One. His job is to defend. He’s reading the play. He’s making good decisions and he’s been a solid player for us. -Gallant

The more you play in the system, the less you think about it. You just go out and play. I don’t think it’s hard to learn. Different guys do different things. You just try and read off each other. And once you get used to playing with someone, you just react. That’s what I’m doing with Millsy. -Holden

The adjustment has been great for me and my family. I spent three years in Colorado so the travel is kinda similar. I miss the snow sometimes, but I don’t miss having to shovel it or drive in it. -Holden

He’s on the first year of a two-year deal, one which carries an AAV of $2.2 million. The way it’s trending, GMGM is getting a good return on his investment in Holden. And all that talk of benching him, trading him or waiving him? I’m not hearing a peep now.