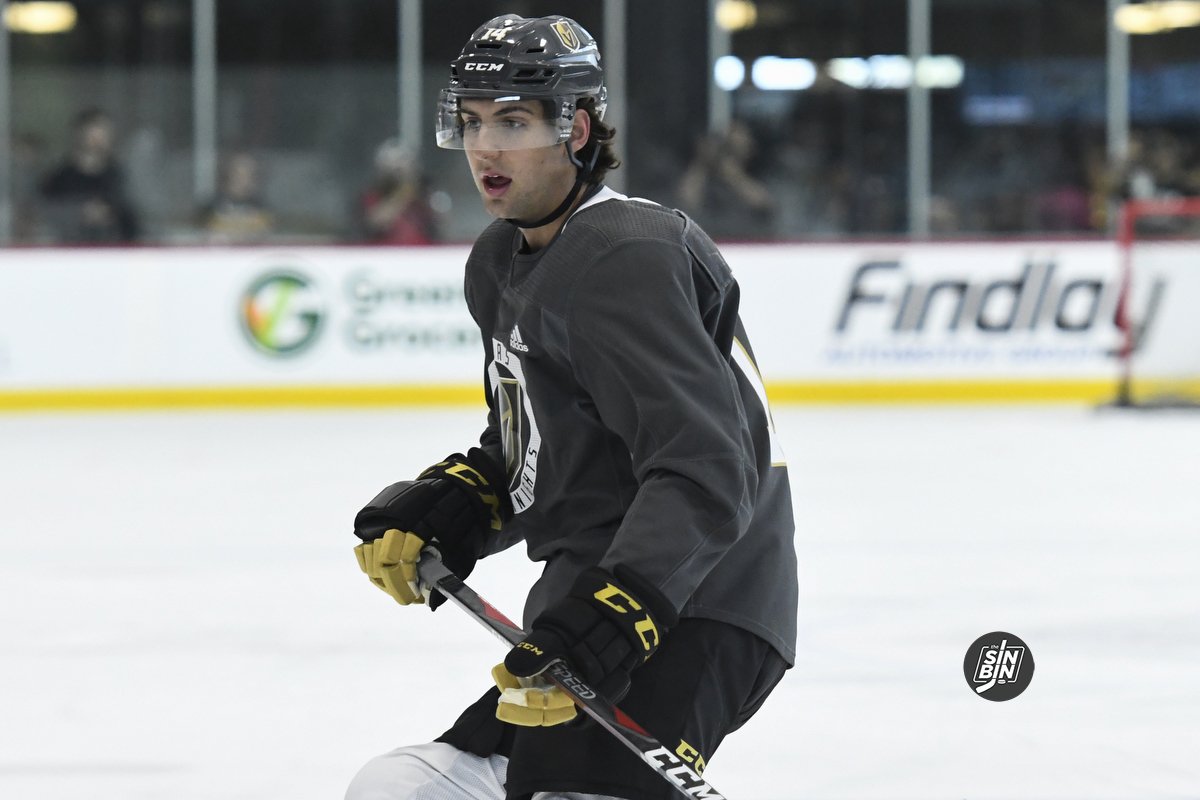 Pick any rookie, whether they were picked in the 1st, 2nd, 7th round, or not picked at all, and you’ll find an imperfect player. The Golden Knights have their choice of five of them as they look for the best rookie defenseman to make the team out of camp. Through a few weeks of camp, the competition has begun to separate itself with Dylan Coghlan and Zach Whitecloud rising to the top of the class while Jimmy Schuldt and Jake Bischoff have lagged a bit.

Floating somewhere between those four is Nic Hague, the 2017 2nd round pick who stands 6’6″ tall and weighs in at over 210 pounds. He has terrific hands, especially for his size and position, and he’s lethal from the point on the power play. His decision making is good, he sees the ice well, and he has the type of personality that makes you want to follow him. But concerns about his foot speed have left many, including myself, wondering if he’s indeed ready to take the leap into the NHL as a 20-year-old.

On Thursday he was tasked with the toughest test of his professional hockey career. Paired with Nate Schmidt, Hague was set to take on the lion’s share of minutes against the Kings top line of Anze Kopitar, Dustin Brown, and Alex Iafallo. For the most part, the immediate reviews on Hague’s performance were good.

It was a little bit intimidating I guess you can say. I felt like I was playing against Kopitar and Brown most of the night, but I thought I settled in and playing with Nate makes it easy. I felt good. Once you get past the bright lights of it all I thought I defended against them well and I limited their chances as much as I could. -Hague

I thought he played real well last night. Thought he was big and strong and solid and played a good game. -Gallant

However, upon a deeper look, you’ll find the performance was also imperfect.

Let’s start with the good, because I really like Nic Hague, I think he has a bright future, and quite frankly, I don’t feel like being the jerk who leads with the bad.

Where Hague is his best is when the puck is moving in the right direction (meaning towards the opposition’s goal). Whether that’s breakouts, stretch passes through the neutral zone, or in the offensive zone, he truly is a weapon. On the power play he had a number of positive moments standing on the blue line making himself dangerous. But where his game shined the most was in his puck control when he had time on the puck. There were two plays, in particular, that should have anyone reading this excited about Hague’s future.

This looks simple. It’s not. It’s a perfect find, to the best player on the ice, and it’s done quickly, with precision, with a defender right in front of him. That’s a good play and it nearly leads to a goal and a primary assist for Hague.

This one they actually highlighted on the broadcast and for good reason. The decision is made quickly and perfectly to move the puck up off the wall and start a breakout. That’s Golden Knights hockey at its finest and it’s why they are a nightmare to play against when they are on their game. There are forecheckers (including one that’s won a Selke Award) and they can’t do anything because the Golden Knights are positioned to perfection and they execute exactly what they draw up on every breakout of the d-zone. Terrific stuff here from Hague and a stick tap to Curtis McKenzie for being exactly where he should be with his stick on the ice.

Then there are pair of plays that highlight Hague overcoming the concern everyone has about him, his foot speed. In both plays he’s not exactly using blazing speed to get to the puck, but his experience in being a big body with a long stick allows him to shepherd the puck out of danger.

If he did this every time, he’d be Brayden McNabb, and he’d be an absolute no-doubter to be in the Golden Knights lineup on October 2nd. But, he’s young, hasn’t yet played an NHL game, and isn’t at the point in his career where he’s savvy enough to overcome his deficiency every single time. That leads to plays like this.

When the puck is dumped in, Hague has plenty of distance on the attacking forward. His turn is good, his angle is good, he even seems to have a strong stride towards the puck, yet, Dustin Brown (a 34-year-old forward who is widely considered over the hill and not exactly the most fleet of foot) gets to the puck at the same time as Hague. In the previous examples, Hague finds a way, but against a vet like Brown, despite technically being first to the puck, he’s forced to nudge it into the corner and concede possession.

The fear is what this will look like against faster and/or better players. This is a routine play that will happen time and time again if he can’t defend it properly every single time. Coaches will see this on film and instruct their forwards to throw pucks into the corners and feast on the rookie all night long.

Finally there’s this one, which highlights another potential problem in Hague’s game.

First off, he takes too long to make the decision of where to go on the breakout, but ignore that because that’s more of an anomaly with Hague than it is a problem (see the multiple clips above showing great plays with the puck on his stick). It’s his reaction afterward that’s concerning. He has a tendency to reach rather than moving his feet to skate back into good guarding position. The first reach gets him beat, the second is a panicky attempt to rescue the play, and the third one is desperation.

Having watched a lot of Hague’s game, his long stick is his best friend and his worst enemy. He’s so good with it that he becomes overly reliant upon being able to win puck battles with it. Thus, he spends a lot of time reaching for poke checks rather than fighting to get into the play. In juniors, he knocked the puck off every guy’s stick. In the AHL, he had success more often than not reaching in on a dangling forward. But in the NHL, even a player like Mario Kempe is going to make those reaches look lazy and render them ineffective.

All in all, there is much more good than bad in Hague’s game (that’s why he was a 2nd round pick and quickly became the best defensemen on the AHL’s Western Conference Champions), but there are flaws that would leave any sane observer concerned with what may happen at the world’s highest level of hockey.

For me, it’s not time yet for Hague to become a full-time member of a defense expected to contend for a Stanley Cup in front of a Hall of Fame goalie. He’s not far off, but his imperfections will lead to goals against, while Dylan Coghlan’s and Zach Whitecloud’s won’t.

Reilly Smith Says A Longer Offseason Has Its Benefits