Recently one of our followers let us know he sent an email to Bill Daly, NHL Deputy Commissioner, inquiring on a date for expansion announcement. Here’s the email our favorite fan from Memphis sent the league. 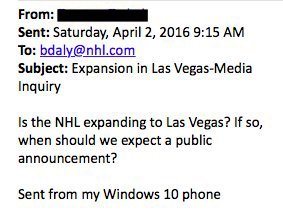 My guess would have been that any email using the words “Las Vegas” and “Expansion” would be automatically forwarded to a folder marked “annoying fans,” but it appears that is not the case.

Just three days later a man named Frank Brown responded to the email. After some digging, we learned Frank’s job is “responding to Commissioner’s office requests.” God, that job must SUCK. Nonetheless, here’s the response. 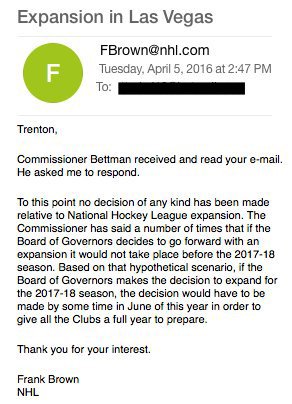 We’ve heard Bettman say something similar before, but it’s definitely interesting to see it in print directly from the league that “some time in June” is the official deadline for hockey to start in Vegas in 2017-18.

Not sure we can really take much out of this email other than the fact that it’s cool to know someone in the league offices do read our emails and take the time to respond.

If anyone has else has received similar emails, shoot them over to ken@sinbin.vegas, I’d love to see if/how the answers have changed over the past year or so.

T-Mobile Arena Doesn’t Need A Team, But They Expect One