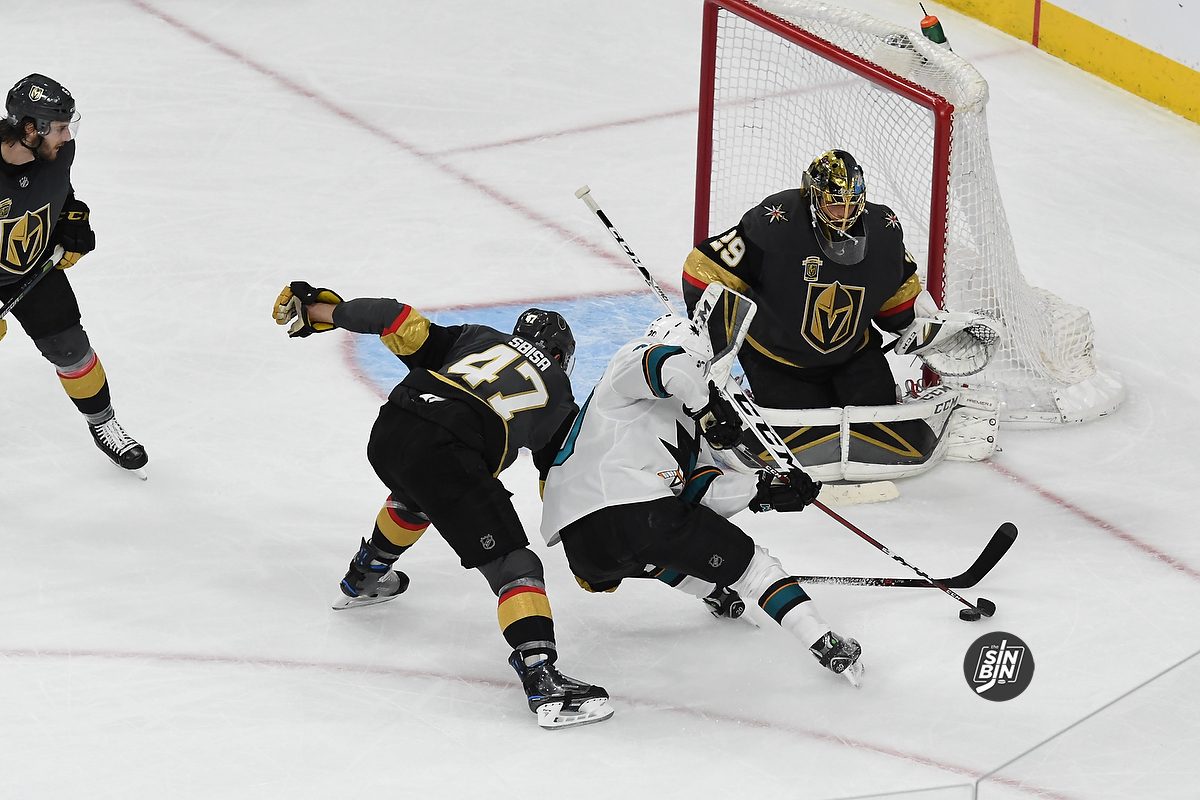 Since coming in for Jon Merrill, Sbisa has been excellent with Colin Miller. (Photo Credit: SinBin.vegas Photographer Brandon Andreasen)

Throughout the postseason, analysts have talked about the Golden Knights as a future model for teams living under a tight salary cap. The players’ average age, salary, skill, desire, leadership, and unity is what makes Vegas so ideally well-balanced.

We don’t have that superstar D-man that has to play thirty minutes. As a group, we’re pretty balanced. Everyone can do each other’s job… we’re a real tight unit. It’s been fun. -Luca Sbisa

Signing a defenseman, or any player, to a massive contract can sometimes hurt a club’s progression. Erik Karlsson and Drew Doughty averaging up to 30 minutes a night doesn’t guarantee great team defense. Instead, the plan of balancing minutes among three defensive pairings has been wildly effective for Vegas.

Ice time is pretty spread. In certain situations guys play more but I think everyone is pretty fresh because every guy plays around 20 minutes. You don’t have to play 28-30 minutes over 82 games because eventually it’ll catch up to you. -Sbisa

Sportsnet’s Nick Kypreos said he expects the Golden Knights “passive aggressive forecheck” a problem for Washington’s defense. The same unit he said looked “done” against Tampa. Through 15 games in the postseason, no one has said the Golden Knights defensemen looked tired.

A D-pair that only plays 12 minutes a night, I don’t think they’d play at their best. If everyone is getting regular shifts it gets you into a rhythm playing more at their abilities. -Sbisa

Like other leagues, the NHL is a copycat league. Other GM’s have to be taking notes, drooling over the Golden Knights success. A team with four solid lines, six reliable d-men, and a lights-out goaltender is a blueprint every franchise dreams of designing.

I think we’ve done a good job blocking shots, giving them shots from the outside. They may create some chances, that’s the way hockey is. -Sbisa

Sbisa and the other Golden Knights defensemen will have to continue playing brilliantly against the Capitals. If Vegas can keep fresh on the ice by sticking to their gameplan, Washington’s offense will have a hard time getting close to “Superman” Fleury.

And if that happens and Vegas wins the Cup, every NHL GM may look to add ‘Golden’ to their team name too.

First Time At T-Mobile Not Kind To Opponents

The defensive structure I was excited about how quickly it was coming together after 3 preseason games has completely fallen apart for 11 minutes here. This is going to be a process, and it's going to be painful at times.

That's the type of goal I'm worried about with the Cassidy zone system. Martinez is expected to be on the post and it leaves time and space for the player behind the net if VGK lose a puck battle. Winger support was fairly poor too.