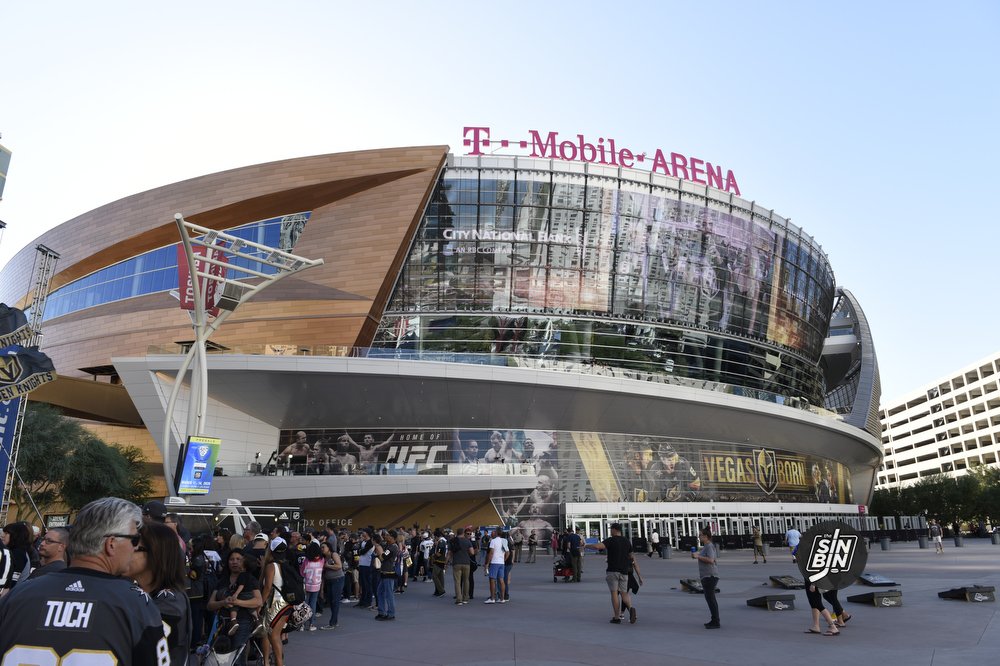 By now you’ve probably seen the plans for the unique, Vegas-centric NHL All-Star events set on the Strip. The two additional skills competitions will take place outdoors, on a locked-down Las Vegas Boulevard, and will singlehandedly blow away every other All-Star event in history. Steve Mayer, the NHL’s Chief Content Officer joined 32 Thoughts yesterday to break down the events and why Las Vegas is the perfect location to have such a grand event.

We’re going to have two events outside the arena. What we’re doing is creating a rink, what will look like a rink, on the fountain. The faceoff circles, the goal, the middle faceoff circle will be hard surfaces on which the skill will be performed. Imagine that the water of the Bellagio fountain is the ice. So when you look from high above you’re going to think we built a rink in the Bellagio fountains. We’re using the fountain as an element to the game. –Mayer on 32 Thoughts Podcast

When the NHL asked for bright lights, glamor, and innovative entertainment, event planners knew there was only one location. Some ingenuity and a little elbow grease, the City of Las Vegas will make it happen.

When the league staked claim in Las Vegas five years ago it was clear they were here for several reasons. The NHL’s suits correctly forecasted their product would not only survive but thrive in Southern Nevada. The Golden Knights have been a contender since their first season and the fan experience is better than all 31 other cities. So yeah, the NHL believed hockey would achieve success in Las Vegas. Also, it is a great place to throw league parties.

It’s because of Vegas. Vegas is the best place that you can do something that’s unique and different. We wanted to combine Vegas and combine hockey and it’s going to be flashy. We do think we have a couple of nice wrinkles that will absolutely stand out and be extremely memorable. –Mayer on 32 Thoughts Podcast

While planning for a major event like All-Star weekend takes months of work, Mayer said it was a pleasure working with the city and county officials to help make it a one-of-a-kind event showcasing Las Vegas.

Which mascot are you most excited to see during #NHLAllStar Weekend? 👇

Thankfully, the city and county officials were all on board with most of the ideas the NHL pitched them.

There’s a lot of parties that weigh in. You need a unanimous vote to move things forward. The folks in Vegas have been incredible to work with. This is an out of the box idea. It’s not been easy to get the permitting. From an operational standpoint, those that are involved, especially the Clark County side, they they need every inch of how you are going to do it, how tall things are, how small things are, where are the barricades, I could go on and on. There are so many people that you need to sign off on. –Mayer on 32 Thoughts Podcast

The NHL’s CCO admitted there was one idea that didn’t fly.

When we were looking at places to do these outdoor events I wanted to shoot pucks off the Stratosphere. That’s way too dangerous. –Mayer on 32 Thoughts Podcast

Not only will the NHL’s best players be in Las Vegas this weekend so will some of the gridiron’s greatest. The NFL’s Pro Bowl will be held blocks away at Allegiant Stadium.

.@renfrowhunter has been named to his first Pro Bowl 🎰

According to the NHL, they’ve integrated some of football’s best into a couple of their skills competition. Also, the league has worked out ways to stagger their events with the NFL’s so fans could consume both without missing any of the action.

We’ve always talked about NFL players participating in some of our events and certainly being in the building. There are a couple of opportunities that you’ll see where an NFL player will be a part of what we’re doing. We’ve been working with the NFL for about six months. Most importantly, we’ve been coordinating for a fan in Vegas the opportunity to never miss anything. From a scheduling and timeline situation we worked together so that we were never coming up with an event that would take place at the same time. –Mayer on 32 Thoughts Podcast

Mayer laid down the details for most of the weekend but held back a few secrets. He did note that several players and their representatives had been campaigning to participate in the Bellagio fountain challenge.

It’s hard to imagine a skills competition on the Strip without a Golden Knights player.

Breakaway challenge we’re going to be doing. That was an event that we did for many years. Vegas was the perfect place to bring it back. We’re in the process of going to the players that are going to participate in that, we want to hear from the players. Vegas is a cool place to do that. Talking to players about their potential roles we’re getting a lot of players coming back or team management coming back to us going ‘Hey, my guy really wants to do that fountain thing.’ I think that’s really cool. –Mayer on 32 Thoughts Podcast

From fine production, to creative events, there was no expense spared. And it will all begin with a star-studded opening number.

We’re going to be doing a big opening in Las Vegas. DJ Zedd is going to be on the ice and perform. There’s going to be skating Elvis’, and Rat Pack folks, and Showgirls. The open will be something that people will remember. We’re going to have a few NFL players, celebrities, a lot of Vegas celebrities. –Mayer on 32 Thoughts Podcast

Overall the league is really excited to share and show off some new unique events and their host city. It’s one of the reasons why the Golden Knights are an NHL franchise. Las Vegas is a turnkey location for big, elaborate events like the NHL All-Star Weekend and the NFL Pro Bowl. Both leagues can rely on the city to comfortably supply venues, resources and places for fans to eat, drink, gamble and party. Or whatever tourists do.

As for us locals, we get to enjoy all of this excitement and then take a $17 (plus tip) Lyft home and call it a night.