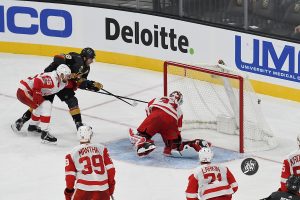 Like restless fans, ESPN Insider Rob Vollman is getting prepared for the trade deadline. He ranked NHL general managers most likely to make a late-season deal. To no surprise, Golden Knights GM George McPhee made Vollman’s list.

The numbers show McPhee is rather active when it comes to trades, averaging 2.8 per season and 1.6 per year actually on deadline day.

Vegas is in the unexpected position of being buyers at the trade deadline, but don’t expect any big moves at the deadline because McPhee was not known for blockbuster trades in his time as Washington’s GM. Other than accidentally giving up a future star in Forsberg, McPhee never surrendered more than a second-round pick or a secondary prospect to get what he wanted (since 2005).- Rob Vollman, ESPN.com Insider

Vollman notes McPhee isn’t known for blockbusters around the trade deadline, but this is uncharted waters for an expansion team. Somehow McPhee will try to balance this season’s success and the future of the franchise. No doubt the Vegas brass will be making some difficult decisions before February 26th.

Adding fuel to the fire were comments by James Neal’s agent to Ed Graney of the Las Vegas Review Journal.

Patrick Morris (1), agent 2 @jneal_18 : “I don’t negotiate in public, but if the Feb. 26 trade deadline comes and goes, I will be shocked if James is on another team. No other team has called me and said they are close to acquiring James. I think it’s full steam ahead for Vegas.

More Morris (2) on @jneal_18 : "If we could agree to terms for him to (remain with the Knights) we would welcome that. He loves it there. James went into the (Vegas situation) with his eyes wide open. He has more than done his part."

Morris, agent @jneal_18 (3): “George McPhee is an intelligent man. I don’t know Bill Foley, but he obviously has a passion to win. His timetable of winning in 3-5 years has obviously changed now. This is not an irresponsible organization. You have to go for it when you …

Final Morris: @jneal_18 "have the chance. And James Neal and his play and leadership has been a huge part of what has happened there. Everybody is a big boy in this. James is a core player in all of this. He is among elite company as an NHL scorer.” #RJnow

(The whole story from the RJ, which is a gem, can be found here.)

Agents can be a bit tricky as they are in the know, but also have pretty strong agendas. There’s no doubt this is great stuff from Morris, but things can change in a hurry if negotiations with Neal and the Golden Knights aren’t moving along like McPhee would like.

Finally, we need to revisit a story we wrote last week…

General Manager George McPhee is in an interesting spot. The fans, the ownership would go crazy if they started offloading guys for a whole bunch of future considerations. But he also can’t be foolish enough to say let’s talk contract with James Neal, let’s talk contract with David Perron… if we’re not getting deals done… let’s at least listen to what we’re being offered for these guys. -McKenzie (on NBCSN)

Last week on TSN radio it was a sure thing, but now on NBCSN there’s room for “at least listening.” Odds are it’s just the Bobfather taking a safer approach with the larger TV audience, but it certainly perked our ears up and made us wonder if maybe he heard something to make him change his mind.

George McPhee’s options are wide open. He’s not going to do anything before the last week of the trade deadline, to see which way he needs to go. -McKenzie (on NBCSN)

So what does it all mean?

It means fans should prepare for everything. No VGK fan should be shocked if they sell, if they buy, or if they do absolutely nothing. This is a situation no GM has ever been in, so the options really are all in play. McPhee has continuously said he won’t derail the Golden Knights success, but this is a business after all, and at this point in time, he probably doesn’t even know what’s going to happen.