Warning: This is about as in-depth on hockey tactics as we will likely ever get on this site, but here goes.

Tomorrow night the Vegas Golden Knights travel to Alberta to take on the Edmonton Oilers and one of the league’s best players Connor McDavid. Before they left for the road trip, we caught up with Nate Schmidt and he gave about as in-depth of a breakdown on how to stop slow one of the league’s greats.

So what exactly is Schmidt saying here?

The first thing he says is “make sure you have a good gap.” What Schmidt is talking about when he says gap is the distance between the defenseman and the attacking forward. Usually, the ideal scenario for a defenseman is to be within one stick length of the forward when the player enters the blue line. This closes down the space the forward has to make a play. Against a player like McDavid who has elite speed, the gap often increases because he’s either moving so quickly or the defenseman doesn’t feel comfortable staying in front of him. When he says “good gap” he means he wants to be as close to McDavid as possible without being left in the dust. 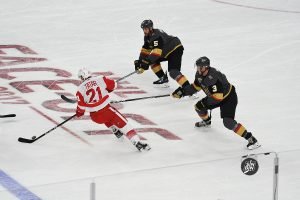 Don’t worry about what others think when you are screaming “GAP CONTROL!” at your TV tomorrow night. (Photo Credit: SinBin.vegas Photographer Brandon Andreasen)

That brings us to Schmidt’s second point saying “it comes down to the forwards.” Since maintaining a tight gap is so difficult and in many ways risky against a skater like McDavid, Schmidt suggests the forwards will be crucial in stopping him. There are two facets to this. First is the obvious one, don’t let him ever get going fast enough to skate past a defenseman. If the forwards make it difficult for McDavid to bring the puck from his own defensive zone, through the neutral zone and into the attacking zone, keeping a tight gap will be much easier as quite simply, he won’t be moving as quickly. The second is when McDavid does get going and Schmidt or another defenseman needs to leave a larger gap. As the defenseman backs off at the blue line, he’ll shade towards the middle as to make sure McDavid cannot skate straight on net and score. Therefore, there will be plenty of space in between the blue line and the circle along the outside portion of the ice. The forwards must work hard to get into that space and clog it up. The more space McDavid has to work, the more deadly he is. So, either the forwards clog up the neutral zone and make it easier for Vegas’ D-men to pinch forward and cut the player off at the blue line, or as the defenseman backs off losing their “gap,” the forwards have to fill the void that must be left open due to the risk of McDavid flying directly by and getting in on goal all alone.

The last part is where Schmidt says “make him come the whole way.” Quite simply he’s saying they need to stay close to him as often as possible. He mentions multiple times how important it is to not allow McDavid time and space in the neutral zone which lets him enter the attacking zone with speed. Again, this is where the forwards come in. In a perfect world, when McDavid is on the ice, every pass will be challenged, and no one is given a bunch of space to skate, especially #97. Schmidt wants to see the forwards make it tough for the Oilers to get the puck out of their zone and into Vegas’.

All in all, the best way to stop McDavid from taking over a game is to slow physically slow him down by taking away open ice for him to skate through. Luca Sbisa and Schmidt have done very well at this with the help of pretty much all four lines forechecking, but without Sbisa, and on the road (can’t match lines as easily) things get more challenging.

It’s going to sound very cliche, but when all is said and done tomorrow night, if the Golden Knights are to avoid being smoked by McDavid, it’s going to take a team effort every single time he’s on the ice. Easier said than done, but so was starting 8-1, so who knows.

Ok, now back to talking about mascots, goal horns, documentaries, and other useless but awesome stuff.

Malcolm Subban Skates On Off Day At City National Arena