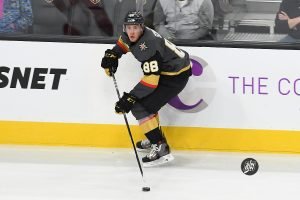 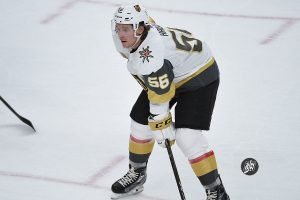 As the gathered media waited in the locker room inside Staples Center each Golden Knights player came in one at a time. Fleury walked through wearing a pair of Euro style tight jeans, Neal appeared in fancy sneakers, and Bellemare walked in wearing spandex that were a little too short for comfort. Then, in walked Nate Schmidt. Like always he was wearing a giant smile and laughing at anyone who wanted to laugh with him. He was also wearing sandals, but they didn’t match, the left foot was his own sandal marked with a little sticker with the number 88 on it, on the other foot was a sandal he “stole” because he couldn’t find his. It was that of his best friend on the team, Erik Haula, and it was an image that couldn’t have been more perfect for the story I was there to write.

There are many strong pairs of friends on this team. Alex Tuch and Shea Theodore live together, and Jonathan Marchessault and David Perron hit it off before training camp and became even closer on 1 October, but there’s not a friendship quite like Haula and Schmidt.

Erik Haula moved from Finland to the U.S. when he was 16. He attended high school in Faribault, Minnesota before going on to college at the University of Minnesota. While there, his roommate was Nate Schmidt.

Haula wound up on the Minnesota Wild while Schmidt ended up in Washington D.C. to begin their NHL careers, but that didn’t mean they didn’t keep in touch.

We had played in college, we played on softball teams together in the Summer, we’d work out in the same gym… although he’d show up a little later than I did. -Nate Schmidt

They also played in a charity hockey tournament called Da Beauty League over this past Summer in Minnesota.

He told me after he signed his contract he said, “you better let me know first.” So I made sure to call him and it was one of those things where you (I thought) I can’t wait. -Schmidt

Haula and Schmidt have both purchased houses in Las Vegas after living with each other when they first arrived. They are constantly seen joking around on and off the ice including a prank pulled early in the season which ended up with Nate skating around at practice, in front of a crowd of about 300, with a wax penis on his helmet. (I can’t confirm it was Haula, but let’s be honest, who else do you think did it?)

On January 14th, the Golden Knights held their “Fan Fest” in which over 10,000 people headed to The D in Downtown Las Vegas. Nate and Erik walked the red carpet signing autographs and interacting with fans, but each of their minds were on something else. Both are diehard Minnesota Vikings fans, and the Vikings were playing a playoff game against the New Orleans Saints. Fan Fest ran from about the 2nd quarter of the game to midway through the 4th, but that was not going to stop Schmidt and Haula from watching the end. After the Golden Knights event was over, the two Minnesotans took off their Vegas jerseys and headed back in to The D to watch the game. That game ended in the most dramatic fashion with Haula and Schmidt’s favorite team scoring the game-winning touchdown with no time on the clock on a stunning hail mary.

We went absolutely bonkers, Haula and I in this little bar upstairs, it was awesome. -Schmidt

Fast forward to Game 2, when Erik Haula scores the game-winning goal in double overtime to give the Golden Knights a 2-0 lead in the series. All the Golden Knights congregated along the boards to celebrate the biggest goal in team history, but when the group started to dissipate, Schmidt skated in and gave Haula a hug that looked like something you see when a military member returns home from overseas.

It was a big moment for him, and it was just cool to see him at the end there when the pile was over and to be able to say, that’s a big-time play. Erik and I have a lot of history. Especially with where he’s been in his career, it’s a similar place of where I’ve been, so to see a guy’s hard work pay off, I was pumped for him. -Schmidt

It was a moment those two have undoubtedly dreamed of sharing together. Being on the same team as a long time friend, and getting to celebrate a sudden death playoff winning goal, it’s why people play sports.

You want to be able to have fun with people you like being around and that’s what’s made our group great and that’s the reason why our relationship is fun as well. You want to win with your best friends and awesome teammates and that’s what it comes down to. -Schmidt

Nate never found his missing sandal, but if I had a guess, it’s disappearance was probably Erik’s doing. It’s just a shame I didn’t find out for sure by the time I wrote this story.

Here’s my full interview with Schmidt today about Haula.