There’s always been this saying in professional sports, and especially in hockey, that on any given day any team can beat anyone.  There’s no question it’s true, but it’s the sports equivalent to your buddy begging you to drive to Primm to buy a lottery ticket under the premise that, you can’t win if you don’t buy a ticket. Or Jim Carrey in Dumb and Dumber screaming “so you’re telling me there’s a chance.”

Can you win the lottery? Yeah. Could Lloyd Christmas ever end up with Mary Swanson? Technically, yes. Can any team win on any night? Of course.

But there’s a reason that move is called Dumb and Dumber. Because we wouldn’t even have to say this stuff if there actually was a reasonable chance. 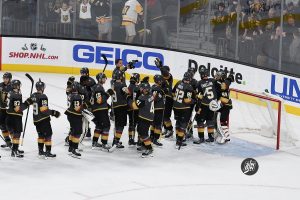 There’s a much higher chance of this team going all the way than anyone getting me to go to Primm. (Photo Credit: SinBin.vegas Photographer Brandon Andreasen)

That saying was thrown around so often before the season started that people ended up starting to honestly believe it. “The Golden Knights can absolutely beat the Pittsburgh Penguins, this is the NHL” they would say. Anything’s possible in sports right?

But now, that saying couldn’t be further from the truth. The Golden Knights not only can beat any team in the NHL, there’s now a belief that they should, because well, they have.

The Golden Knights are now 5-0 against the NHL’s conference semi-finalists from a year ago. They also have wins over every team that’s won the Cup since 2008, they’ve beaten every team in the Western Conference playoff positions, and they are a remarkable 9-1-0 against the Pacific Division.

The story is that we’ve been playing the right way. We have the whole organization behind us that made this team happen long before we as players got to Vegas. They did a hell of a job. They decided to go with 30 guys who have character and each of the 30 want to do a little bit better than they did in their former organization, and it’s working. -Pierre-Edouard Bellemare

And not only have the Golden Knights beaten most of the best teams the league has to offer, they’ve proven they can play with or even outplay every single team in the NHL, and they’ve done it in less than three months.

It’s belief, but it’s also putting in the work to have success. We have to have the right mentality to play the right way. For us to accomplish that there’s only one way, and that’s to do the right things all over the ice. If we do all those little details, it doesn’t matter who it is, we should win. -David Perron

This current homestand concludes with games against the Tampa Bay Lightning and the Washington Capitals, two more teams that should present massive challenges for the “e-word” Golden Knights. But is anyone using the phrase “any given night” for these two games? Absolutely not. Because they aren’t that different for the Golden Knights than tomorrow’s game is against the Florida Panthers.

When we play the way we play tonight, that’s the perfect game for us. -Gerard Gallant 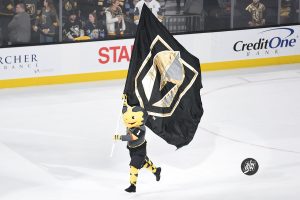 Here’s a picture of Chance because this article says “chance” like 40 times and I couldn’t find another way to work in our favorite Gila monster. (Photo Credit: SinBin.vegas Photographer Brandon Andreasen)

It doesn’t take the right circumstance or a stroke of luck. The Golden Knights are good. I’ll even say it, the Golden Knights are really good, and no longer is there a team on the schedule or a potential series that the front office, players, or even fans should be concerned with.

This team can play among the NHL’s elite and it doesn’t take a one in a million chance to come away with the W. Let your dreams run wild because, yes, I’m telling you there’s a chance.