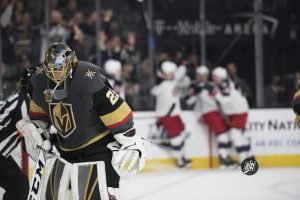 Teammate Matt Dumba, who also scored his 11th goal on Friday agreed that a season sweep can play a factor in the postseason.

It’s always a new season but at the same time it’s kind of nice to put that in the back of their head. They’re going to use that as fire too if that is a matchup. We are too. We’ll bring confidence along with that. -Matt Dumba, Wild Defenseman

There’s no question the Wild are in the Golden Knights’ heads.

Wild veteran Eric Staal spoke more diplomatically but hinted towards the edge his team has.

Well playoffs are always a clean slate, but it doesn’t hurt. They have a good team. They got some good players, guys that are having career years but we’re doing what we need to do. We’ve felt comfortable playing against this team. -Eric Staal, Wild Forward

Staal has six points (4 goals) in three games, of course he’d feel comfortable facing the Golden Knights in the playoffs.

It would be a good matchup. -Coyle

Not sure Golden Knights fans agree.