For the first time since the 20 game suspension of Nate Schmidt was handed down by the league, GM George McPhee met with the media to answer questions. He opened with a quick statement explaining that he is unable to talk about the specifics of the situation but, admittedly against his better judgment (“I probably shouldn’t even talk about this”), did to go into a bit of detail about how the Golden Knights handle supplements with their players. 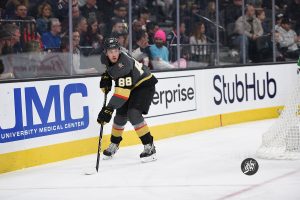 Prior to this press conference, based solely on the statement the team released following the NHL’s announcement, the Golden Knights seemed to be strongly backing Schmidt, however, McPhee’s statements today did a lot to separate that support from any accusations of wrongdoing by the team in this situation.

The organization isn’t responsible for (pause)… It didn’t come from us. Everything we have, any supplements, any vitamins are all NSF (National Sanitation Foundation) approved, we know where our food comes from. So there are no issues with respect to the club. So now you are going to say the onus is on him but I can tell you in this process a lot of you can go for a protein shake at a health food store around here and test positive tomorrow. -McPhee

This is a pretty stark contrast to Schmidt’s statement six days ago.

The fact that I’m issuing this statement is surreal to me as I have only used supplements provided by my NHL team and I have always been extremely careful about what I put into my body. -Nate Schmidt

McPhee was pressed further on the discrepancy.

With what we supply in terms of food and supplements and vitamins and in terms of the way we test our players, and I’m certainly not going to give away all the ammunition of how we do things for other clubs, but we do a lot of testing and we do defensible documentation and we are in a good place with that. -McPhee

McPhee also offered a comment about what he told other players on the team, furthering his stance that the substance which caused Schmidt to test positive did not come from the Golden Knights.

We had one conversation at one point. It’s just about making sure you are taking the right things. Whatever we supply you here is enough, you don’t need anything from anywhere else, and don’t trust it. -McPhee

Due to the confidentiality agreement the GM was unable to say when he first learned about the failed test, when the test was taken, or the name of the substance.

I’d love to be an open book and talk about the experience but I can’t. We are not even a party to this, it’s between the player and the league. -McPhee

Per NHL rules, the team is not alerted when a player fails a test under the Performance Enhancing Substances Program. Instead, they alert the player directly. In this case, Schmidt called McPhee to let him know about the failed test. The timeline remains unclear due to the confidentiality agreement, however, we are aware that Schmidt was in contact with the Golden Knights throughout the process, McPhee did testify on behalf of Schmidt at the appeal, and McPhee did read Schmidt’s statement before it was released on the NHLPA website.

It’s unfortunate that it happened. We did support the player in the appeal and I testified on his behalf but the standards were pretty tough. -McPhee

Six days ago the team statement was “we strongly disagree with the suspension.” Today, “it didn’t come from us.” These aren’t opposite statements, so it should not be taken as the support for Schmidt has completely evaporated, but McPhee wasn’t bashful in making it clear that the substance was not provided by the team, which is a direct contradiction of Schmidt.

Nonetheless, Schmidt will miss 20 games, and the team has to move on, but this story is far from over.

**The entire McPhee press conference has been loaded to the SinBin.vegas Podcast or can be listened to here.**